Conservative media keeps pushing story that the most hateful person in politics is another MLK. Don't believe it 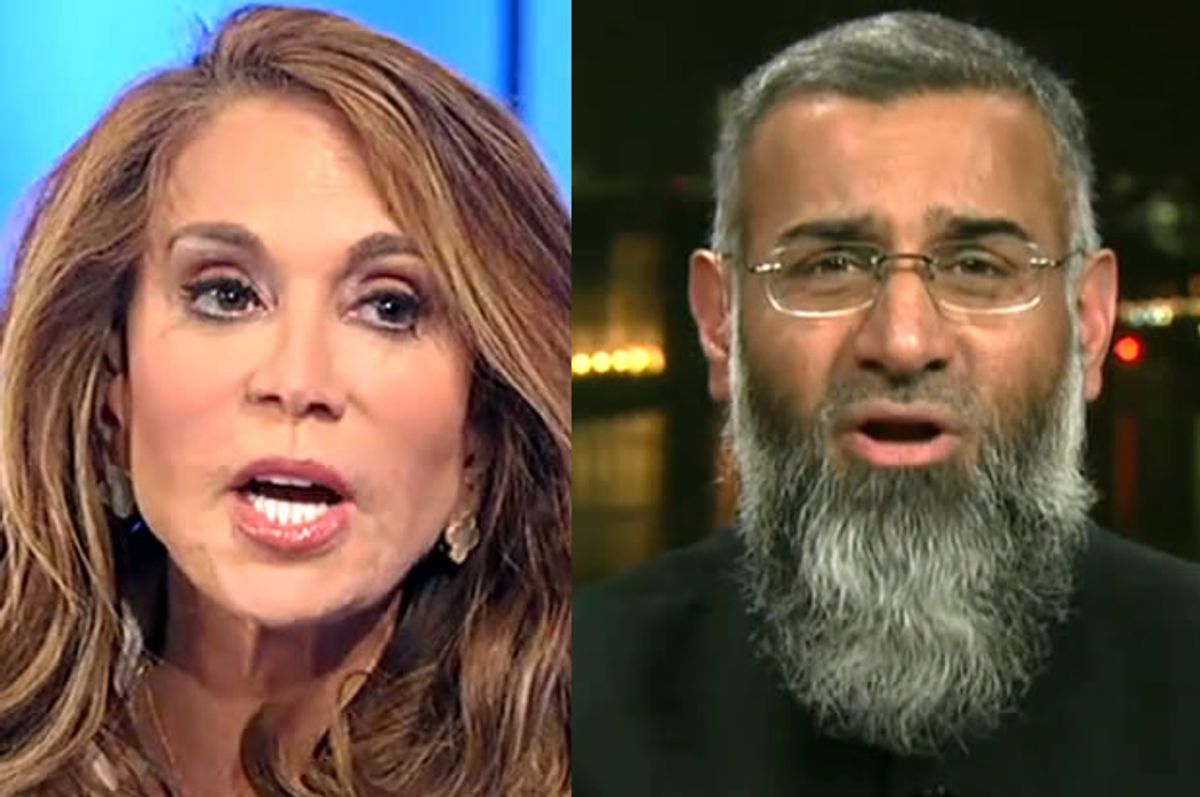 In the aftermath of the shootings in Garland, Texas, Rukmini Callimachi had the audacity to ask in the New York Times, “Free speech aside, why would anyone do something as provocative as hosting a ‘Muhammad drawing contest?’” The question was met with widespread outrage and derision.

Wall Street Journal writer James Taranto set out to answer that question more thoughtfully. In the process he cited an example from my recent Salon piece about how Dr. Martin Luther King Jr., while advocating pacifism, would often deliberately stage his demonstrations to evoke a forceful response from the authorities or communities they were confronting. Likening the ‘Draw Mohammad contest’ to civil disobedience, he argued that despite the risk entailed, it is sometimes important, even necessary, to be provocative in order to, not only defend freedom, but resist (perceived) oppression.

Taranto tried to avoid conflating the struggle of Dr. King with the actions of the American Freedom Defense Initiative (AFDI), which hosted this event—albeit with mixed success. However, Alan Dershowitz would later repeat this comparison, again quoting something very similar to my description of King on Fox News Channel's "The Kelly File," but comparing AFDI head Pamela Geller to MLK. Subsequently, Geller has also drawn from the WSJ arguments--comparing herself to Rosa Parks.

As a black American and a Muslim, I believe this comparison demands a response. And so, I have highlighted below a few guidelines for provocation which help illustrate the vast moral differences between how civil rights activists use(d) provocation, as compared to the AFDI:

No. 1: Be willing to face the consequences of your actions

Doctors and stock traders shouldn’t give people advice that they would not follow themselves. Politicians, intellectuals and pundits should not promote a war they are unwilling to pick up a gun and fight in. And people who are essentially cowards should not go around provoking people.

While the activists of the civil rights movement often knowingly incited violence—they were also willing to face that violence head-on. Indeed, this was the point. They didn’t try to inflame outrage from a group while simultaneously cloistering themselves off from them. They didn’t carry guns; they didn’t try to defend themselves; they didn’t have private security or police protection. Quite the contrary, the police often took part in or enabled the violence against those who demonstrated --one of the things civil rights activists were challenging then (as now) was precisely this abuse and exploitation by formal power structures and authorities.

In stark contrast to this precedent, the AFDI event was protected by police in body armor and wielding assault rifles—with traffic barricades preventing people from even parking within close proximity of the venue itself. As a result of these robust precautions, the would-be attackers were quickly neutralized by a traffic cop before they even got into the venue’s parking lot or anywhere near an entrance. No one in the building was ever in imminent danger. Nor would its organizers ever put themselves in real danger, despite their constant chatter about the threats they receive.

The goal of this event was to solicit some kind of unrest or violence which could be easily contained by the authorities, but could nevertheless be used to help demonize Muslims while making themselves appear brave or defiant. This does not even remotely resemble the civil rights movement.

If the point of provoking someone is to catalyze change in them, it is difficult to see how or why this could happen without direct engagement. The provocation is supposed to be an entrance point, not an end in itself.

The civil rights activists went to white diners, sat down at the counter and asked for service. Rosa Parks sat in the front of a bus—and would have been sitting next to whites if they could stand to cohabitate. Civil rights activists tried to move black families into white neighborhoods. In all cases, those who followed the example of King and Parks were polite and respectful—they did not insult, threaten or demean their adversaries, they simply demanded to be recognized and treated as a human being.

This put whites into an awkward position--they couldn’t be passive participants in an oppressive system, they couldn’t pretend as though they didn’t play a role. To the extent that the protestors were dragged out, humiliated, beaten, or worse—it would happen right in front of these white people, and as a result of their own actions (for instance, calling the cops). By engaging with people in this way, talking to them earnestly, looking them in the eye—the activists forced their oppressors to confront their own ignorance, xenophobia and oppression directly—horrors which often opened people’s minds and softened their hearts.

If Geller wanted to emulate King or Rosa Parks, she should not insult and defame Muslims from afar. Instead, she should go into Muslim communities, engage with ordinary people face-to-face and in good-faith. Everyone would thereby be able to evaluate which party is ignorant, xenophobic or unreasonable. I suspect Geller already knows how this would shake out, which is precisely why she takes shots at Muslims from a distance, surrounded by others who are sympathetic to her view, and insulated from the chaos she sows by the authorities. Again, this bears no resemblance to the civil rights movement.

Beyond methodology, it matters a lot who is doing the provoking, and against whom. If a disenfranchised minority is standing up to the majority, or else against prevailing socio-economic systems and institutions—this can legitimately be considered resistance. If the direction flows the other way, it is persecution and oppression.

Dr. King was part of a disenfranchised minority, and he was trying to shake concessions out of the dominant parties which oppressed and exploited the poor, immigrants and minorities. Geller is a Caucasian millionaire targeting populations which are already extremely vulnerable in Western societies. Her AFDI has been classified as a hate group by the Southern Poverty Law Center, the Anti-Defamation League and others. Obviously, this is all very far from Dr. King’s gospel; it’s much closer to al-Baghdadi’s.

In 2011,  Anders Breivik carried out the worst terror attack in Europe since 2004—killing 77 and injuring hundreds (including many children) through a bombing and shooting spree,  and nearly triggering copycat attacks in the Czech Republic and Poland. Breivik’s primary target was a camp intended to foster greater understanding, integration and diversity; he cited Geller and her allies explicitly and extensively in justifying his atrocities. Rather than condemning this terrorism as she calls upon Muslims to do, Geller instead claimed that the attack was appropriate and understandable given that so many of the victims were immigrants and Muslims. This overt hate speech and support for terrorism lead to Geller and her associates being denied entry to the UK in 2013.

The Garland event’s keynote speaker, Geert Wilders, is no better. In fact, due to his own history of hate speech and incitement, U.S. lawmakers similarly requested that he be denied entry to the United States in the lead-up to the “draw Muhammad” contest.

All of these details were conspicuously absent in the WSJ article—but if they had been presented it would have been obvious that what Geller and her allies are doing is not civil disobedience, and is not in any way analogous to Martin Luther King Jr. or Rosa Parks.

A Martyr for Two Extremes

Contrary to the narratives, predictions and aspirations of the AFDI--not only did the Muslim community in Garland fail to react violently to the “Draw Muhammad” contest, they declined to even exercise their right to peaceful protest against the event, viewing the competition and its organizers as being beneath contempt. But unfortunately, there were a couple of idiots who were willing to give Geller the spectacle she wanted.

To the extent that the AFDI aspires to foster suspicion and persecution of Muslims, or hostility towards Islam—this is actually a goal Geller shares with al-Baghdadi. ISIS brags about their success in alienating Muslims in the West, it is in their strategic interests to foment a “Clash of Civilizations”: it undermines civil Islamists and helps the extremists recruit. This is why ISIS was so eager to take credit for the attack, despite the fact that the group played no apparent role in planning or facilitating the plot, which was an abject failure in the narrow sense.

It was both just and fortunate that Simpson and Soofi were neutralized before they could cause greater death and destruction—although it is a shame that their martyrdom will serve the interests of zealots such as AFDI and ISIS.

As if to underscore this symbiotic relationship between Islamophobes and Muslim extremists, in the aftermath of the Garland incident Geller appeared on Fox News to “debate” a Muslim about the “draw Muhammad” contest. Her interlocutor? Anjem Choudary—ISIS’ most passionate and prominent propagandist in the UK. But of course, neither side revealed Choudary’s longstanding relationship to the Islamic State, which would have allowed the audience to contextualize his calls for Geller’s execution. It was a propaganda victory for both to portray Choudary as a respected Muslim authority, and his sentiments as representative of most believers.

There should be no doubt that Geller has a legal right to her provocations. But of course, just because an act is legal doesn’t make it ethical. Nor does it make it intelligent or productive. Similarly, being provocative doesn’t make one brave or noble. The vicious, polarizing and irresponsible aims and methods of the AFDI and its supporters have nothing in common with those of Rosa Parks or Dr. King.