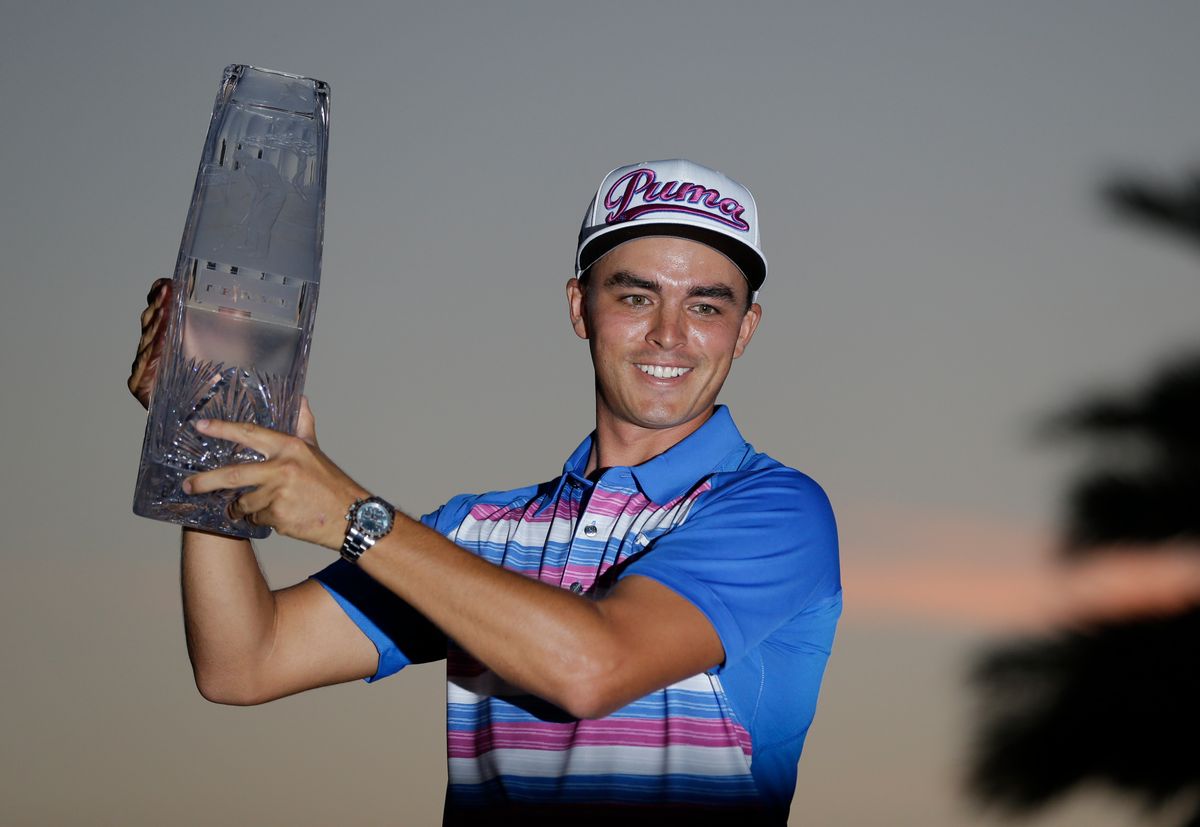 PONTE VEDRA BEACH, Fla. (AP) — After a record-setting finish and captivating victory at The Players Championship, Rickie Fowler could have thanked a number of people.

His mom. His sister. His girlfriend. His caddie. His friends. His fans.

He went in a different direction.

Indeed, the famed island green at TPC Sawgrass was Fowler's biggest ally. Fowler played the treacherous hole six times and walked away with five birdies, including three in three attempts in the final round.

And when he faced that daunting shot for the last time Sunday, he was as good as ever.

Facing a five-shot deficit with six holes to play, Fowler produced the greatest finish in the tournament's 34-year history at Sawgrass. In a three-man playoff on three of the most visually intimidating holes in golf, he never backed down.

He notched his second PGA Tour victory and probably put to rest all that talk about an anonymous survey that questioned his ability to win.

"I laughed at the poll," he said. "But yeah, if there was any question, I think this right here answers anything you need to know."

Fowler closed out his final round with a birdie-eagle-birdie-birdie finish for a 5-under 67. That got him in a playoff with Sergio Garcia and Kevin Kisner, who produced big shots of their own.

For the first time, The Players went to a three-hole aggregate playoff starting on the par-5 16th, where earlier Fowler hit a 3-wood into the breeze to 30 inches for an eagle that made this moment possible.

They all made pars on the 16th.

Kisner rolled in a breaking 10-foot birdie putt on the island-green 17th to keep pace with Fowler, who hit his tee shot to 6 feet and converted the birdie. Garcia, who in regulation made a 45-foot birdie to give him new life, failed to repeat the putt from about the same range in the playoff. All three players made par on the final hole, which eliminated Garcia.

Fowler and Kisner, who closed with a 69 and lost for the second time in a month in a playoff, headed back to the 17th hole for the third time. The great shots kept coming. Kisner barely cleared the mound and the ball settled 12 feet away. Fowler answered by taking on the right side of the green and sticking it just inside 5 feet.

It was the second time in a month that Kisner, winless in 102 starts, lost in a playoff despite making clutch putts.

"Golf is a hard and cruel game," Kisner said. "But hats off. I mean, shoot, these guys are good, I'm telling you. Don't give up on anybody."

Fowler never seemed to miss over the final two hours, and he calmly clutched his fist to celebrate his first tour victory in three years.

"I've been waiting a long time for this," Fowler said. "Back in the winner's circle."

Garcia, who had a two-shot lead heading to the back nine, closed with a 68. He had a 20-foot birdie putt to win in regulation that missed badly to the right. And he faced a crowd that was increasingly hostile to the Spaniard, perhaps remembering the tiff he had with Tiger Woods two years ago.

His caddie was asking for security when he made the turn. In the three-hole playoff, a small group of fans yelled, "U-S-A!" as he took the putter back.

It marred what was other sheer brilliance, a most unforgettable final hour in a tournament that has a history of them.

For Fowler, the timing couldn't have been better.

One of the questions in SI Golf's annual player survey — players do not give their names — was to pick the most overrated player on the PGA Tour. Fowler and Ian Poulter shared first place at 24 percent. Fowler has never faced this level of criticism. He is a favorite among fans and most players for his considerate behavior.

"I don't know if you can get too caught up in that whole deal," Kisner said. "I really don't know that whole story, but I heard the remnants of it this weekend. Obviously he's not overrated. The guy finished — what did he finish? Top five in all four majors last year? Anybody that can do that, as you can see, if you're in that position, you're playing pretty danged well.

"What is he supposed to be rated? What's the threshold here on who calls what's overrated? I wouldn't get too worried about that. But I'm sure he was fired up to get that — whoever said that — off his shoulder."

Maybe that's who Fowler should have thanked.