John Oliver has a lesson for Ted Cruz: GOP has been dead wrong on parental leave for 20 years

The comedian is right: the GOP has been selling the same tired BS for two decades. When will they ever learn? 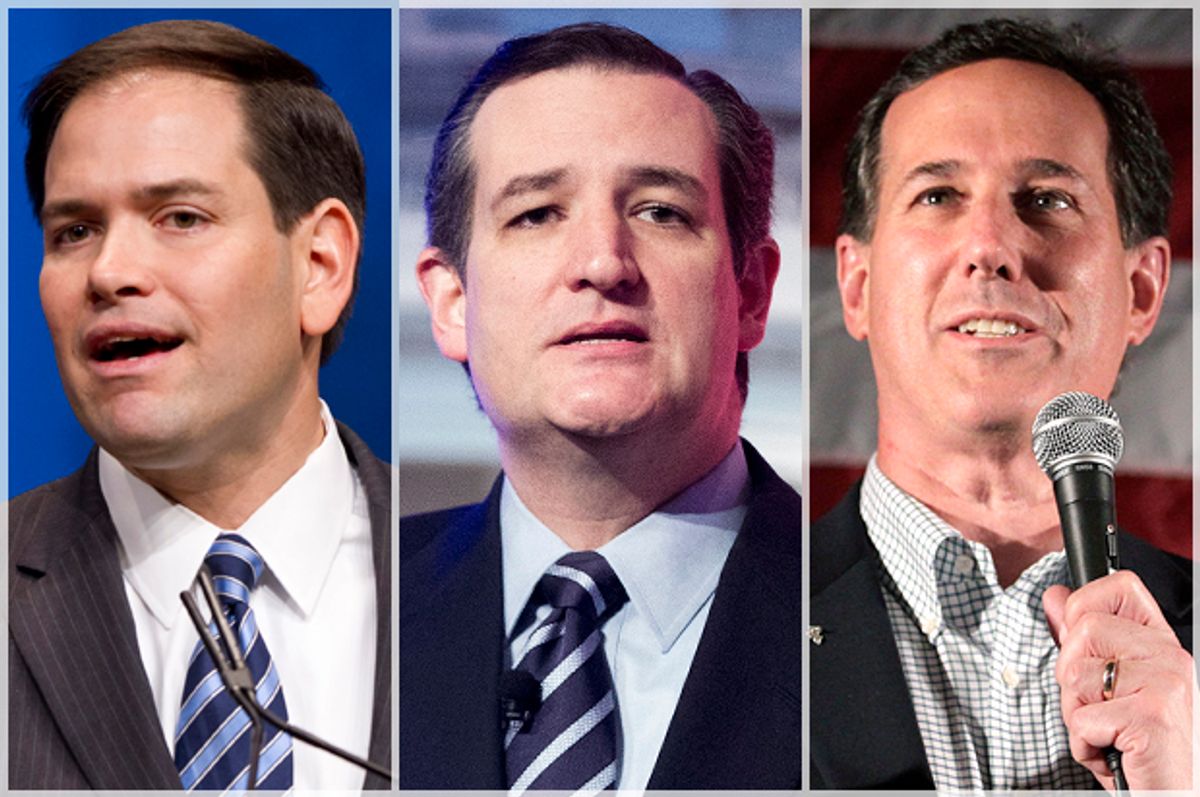 What you’ve heard is true: John Oliver destroyed, owned, annihilated, flayed alive (shout out to the scary freaks at House Bolton), obliterated, etc. Republican hypocrisy on motherhood in a segment on America’s lack of paid leave policies. In typical fashion, Oliver gave a thoughtful rundown on the issue with a healthy dose of mockery aimed at the divide between how we talk about mothers versus how we actually treat mothers in this country.

While conservative politicians and sports franchises may pay tribute to good old mom on Mother's Day with sentimental videos and gratis potted plants, the support seems to end there. The United States is one of two countries that doesn't offer paid leave to new parents, and as we saw with the blowup over Mets second baseman Daniel Murphy missing two games to spend time with his newborn, those who take the time off tend to face some kind of blowback. (And it's often much worse than Mike Francesa behaving like a caveman.)

“This is not how its supposed to work,” Oliver explained. “Mothers shouldn’t have to stitch together time to recover from childbirth the same way that we plan a four-day weekend in Atlantic City… There are women who want to get back to work as soon as they can, and that’s fine. But for many women, the current situation forces them to return way before they want to.”

Another reason to give props to the team behind the segment: they went through hours of footage to pull together quotes from Republicans on why they thought the Family and Medical Leave Act of 1993 was supposed to be the end of the world as we know it. It's a useful way to contextualize an argument that has been going on for decades with little regard for what we actually know about paid leave.

A sampling of reasons why unpaid leave was supposed to be the worst thing ever, according to congressional Republicans in 1993:

“I want to make sure that all of you who will vote for this have no illusions: this bill will cost jobs.”

“Today American businesses are already saddled with too many suffocating regulatory burdens.”

“Now is not the time to shove restrictive federal mandates down the throats of American businesses and American families.”

The major lesson of the segment wasn’t just that conservatives have a real shit way of showing their appreciation for mothers, but that their doomsday predictions about leave -- then as today -- are dead wrong. But listen to Republicans who oppose the FAMILY Act, introduced again earlier this year by Kirsten Gillibrand, and you will hear the exact same arguments from 20 years ago. Usually along these lines: Bad for freedom! Bad for businesses! Bad for workers!

"Americans have great freedom when it comes to work — they can choose the career they like and negotiate with their employer for the things they need," said Tennessee Republican Sen. Lamar Alexander after President Obama introduced his proposal to give federal workers six weeks of paid leave. "One more government mandate, however well-intentioned, will only reduce those freedoms — making it harder for employees to find jobs, negotiate for the things they need, and open and run businesses." (Alexander is also the chairman of the Health, Education, Labor and Pensions Committee.)

Much like its response to the original version of the Family and Medical Leave Act, the GOP has worked itself into a fit over the FAMILY Act -- an improved but still pretty modest piece of legislation. To its credit, Gillibrand’s FAMILY Act does not include the kind of gaping exceptions for small businesses and contract workers that excluded 40 percent of workers from the law. But even with that fix, the proposal to pay workers who are sick or taking care of newborns still doesn’t come anywhere close what’s offered in other countries.

We could keep going, but it’s already well established that the United States is woefully out of step with the rest of the world on the very basics of supporting working families. (But if you want to keep playing this fun game of “ugh wth is your problem America” you can look over this useful map of leave policies around the world.)

But we don’t even have to look to other countries to see how paid leave would work for working families. The approach being floated in Congress right now has already been tested at the state level and has worked out just fine. California and New Jersey already have paid leave policies in place and the impending catastrophe the GOP warned about never came. In fact, businesses in California reported either a positive response to the law or minimal or neutral changes to the way they do business. Meanwhile, parents and workers who have serious health conditions don’t have to bankrupt themselves or lose their jobs over it. (Or at least stand a better chance of not bankrupting themselves of losing their jobs.)

And yet you'd like that we were going full Sweden over here based on how some conservatives have worked themselves up. That may be what Bernie Sanders wants to see, but it's not what's on the table right now. The option before Congress right now lets working parents collect a fraction of their salaries while taking care of newborns or themselves. It seems like so very little to ask, but it's apparently too much for many of the "pro-life" and "pro-family" conservatives in Congress.