"Academia is the Titanic": Mark Bauerlein on teaching in the morally-bankrupt grind of the new American university

Controversial professor discusses NYTimes essay "What's the Point of a Professor?," the adjunct crisis and more 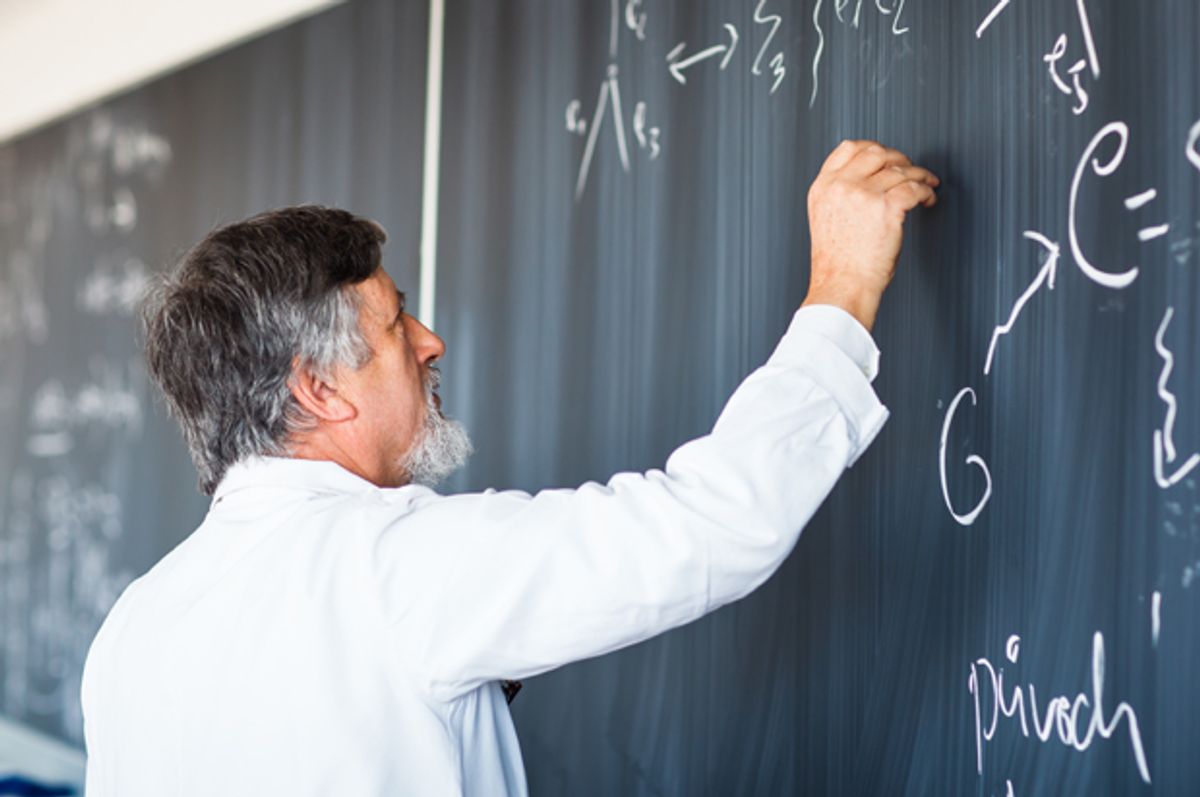 In the New York Times on Sunday, Emory English professor Mark Bauerlein asked "What's the Point of a Professor?" and answered, in part, that what they should be is examples of "moral authority," but that for a number of reasons they are increasingly becoming morally bankrupt "accreditors" instead. A number of professors took umbrage at both Bauerlein's definition of what a professor should be and -- as University of Rhode Island History professor Erik Loomis argued -- whether Bauerlein should even be in the position to be deciding what other professors are supposed to be.

Salon reached out to Bauerlein to ask whether he would like to address the pushback against his piece, and he graciously agreed to do so.

Is it possible that your experience at Emory just doesn't accord with the experience of teachers at other institutions? Or do you think that Emory is representative enough of academia at large to draw generalizations about students and teachers based on it?

I emphasized four-year colleges where students pursue BA and BS degrees, which is certainly a limitation on the commentary. The situation at two-year colleges and with vocational education is certainly different. And within that four-year population we have differences among liberal arts colleges, religious institutions, large state universities, etc. But I stand by the general drift, which is sustained by data from NSSE, the American Freshman Survey, the College Senior Survey, Academically Adrift, and longitudinal studies of grade and homework time.

Do you think you might be idealizing student-teacher interactions from the '60s and '70s? After all, the composition of the student body was far different then -- far fewer women and minorities, for example. Also, is that difference maybe significant in economic terms? I know that when I taught at the University of California, Irvine, the majority of my students had jobs -- often times more than one -- and had to in order to afford college. That fact influenced my ability to interact with them in office hours, because try as I might, creating hours that were both 1) reasonable for a sane human being and 2) able to accommodate the majority my students was, frankly, well nigh impossible.

I'm not sure I get the inference about student-teacher interactions and identity changes. When I started at UCLA in 1977, I had several female teachers, a few Hispanic and Asians, and gays and lesbians, too -- no black teachers that I can recall -- and that didn't affect the quality of interaction. If you are suggesting that non-white male students might have a harder time relating to white male teachers, well, I've found that identity-based factor unconvincing.

The economic point, however, I agree with entirely. I knew many students who worked part-time in college (I did from day one), but they didn't have loans pressing down on them and high tuition fees. UCLA back then was around $500 a year. It is no wonder that students have become more mercenary in their approach.

That said, then, it is even more important that professors impress upon students the moral meaning of their studies. This is a unique time of life, and it passes quickly, and most of them will never again have the chance to discuss why Paolo and Francesca have to suffer so long [for the sin of lust in Canto V of Dante's "Inferno"], what makes the opening measures of Wagner's "Tristan" so great, who the Neocons were...here we impress upon students a higher eloquence, the significance of the past, the cultivation of taste, and all the other things that youth culture and mass culture disregard.

Finally, yes, it is impossible for teachers at large institutions to go one-on-one with all their students. You are right -- and it's deplorable.

Late in my teaching career, I shifted to teaching writing classes based on visual rhetoric, not because I didn't value literature -- but because I considered the main point of a composition class to be the writing and development of critical thinking. It seems to me you believe that the object of analysis -- a literary text as opposed to a film or comic book -- is as important as the analysis itself. Why is that?

No, Scott, I regard the object as more important than the analysis, not as important.

One reason comes from cognitive science, which says that background knowledge (bare familiarity) is essential for critical thinking. In one well-known experiment, reading researchers had two populations of children, one with significantly higher abstract reading skills than the other (verbal IQ such as size of vocabulary and ability to use words they already know) but the lesser group knew more about baseball than the better group. When they were tested on a passage that covered baseball, the reading scores equalized.

So, building familiarity with significant historical, cultural, political etc. phenomena is crucial to critical thinking. (This is the longstanding argument of E.D. Hirsch's cultural literary project.) The question is what counts as significant. People who think that critical thinking can be cultivated as easily through the study of "Mad Men" as through the study of "Paradise Lost" are naive. We need great books and high culture, works of genius and events of historical import, political theory and religious doctrine, creations that have stood the test of time, that possess aesthetic excellence and introduce youth to the full range of human experience. Identity is no criterion of selection, nor is political correctness, nor ideology. (The slogan "everything is political" is a pernicious dogma.) Marx should be taught as well as Edmund Burke, D-Day more than Manzanar.

Why didn't you acknowledge the position of non-tenure track and adjunct faculty? How do they cultivate moral authority and disciples when they're not certain if they'll be around next year?

Agreed, and I've written often in the past about the adjunct problem and the difficulties of addressing it, including the tenured professoriate who generally adore the adjunct system.

All I can say is that adjunct instructors can, indeed, present themselves as moral authorities through their teaching and advising. We know lots of them who are intelligent, serious people with a moral vision that goes along with their field expertise. Why can they not impart that in their courses? Yes, I know, it's hard to do that when you're racing from one campus to another and you have 60 papers coming in. It grinds you down, your authority wears thins.

Why is it so important to you to be seen as a moral authority by your students? Have you looked at your RateMyProfessor page -- I know, it's a terrible gauge, but the dirty secret is we all look at ours -- and seen what students have written about you in an unofficial capacity? Is it possible that students simply consider authority differently now?

I checked my page a few years ago and found only three replies, one of them a poison pen letter by a student who was, precisely, annoyed by my authority. But since I've had many thousands of students over the years, I quickly forgot about it. The best way to reject RateMyProfessors.com is to ignore it.

It is true, though, that authority is different now. The story of this rise in youth self-authorization goes back 100 years, and it bursts into American life in the mid-century with the creation of the teenager and what James Coleman termed in 1960 "the adolescent society." The digital age has accelerated the process of "age segregation." With social media, youths can now spend all their time communicating with one another. It's easy to tune out the grown-ups: just open that screen.

The bedroom is now a social space, and so is the back seat of Mom's car. Teens grow up in a teen-centered bubble, with constant reflections and expressions of themselves bouncing back and forth. They spend ever less time paying attention to grown-ups, and so when a teacher insists that they come in to the office for a face-to-face exchange, many of them falter and resist. We have to break through their reserve and show them that the peer-absorbed world they generally occupy is something to escape in college, not extend.

Do you think the increase in discussion-based classes -- and the consequent decrease in lectures, at least in the Humanities -- contributes to the decrease in need for face time contact outside of class? Put differently, why is email so bad for class communication?

A tough question, I'm not sure. But class-discussion is no substitute for informal one-to-one conversation. Youths open up more to me about the dissatisfactions of college life than they do in class. There is a conformity factor in class that dissipates in my office. We have all kinds of silly representations of youth rebelliousness in mass culture, but we shouldn't underestimate just how much timidity and conformity underlies so many of those gestures. Tattoos, facial hardware, rap lyrics, vulgar language...what could be more conventional and dull?

About email, I have had many exchanges with students over email that were substantive and challenging. I still receive emails about my book, "The Dumbest Generation," and I respond to every one, even the occasionally insulting missive. Sometimes, students raise cogent objections and I have to concede the point -- which is my favorite kind of interaction. (I want them to prove me wrong.)

Sadly, though, the vast majority of emails are blunt, trivial exercises, a way of avoiding substantive contact. The tool invites it. It promotes quick info and casual address. (Some being, "Hey...") This is one reason I disallow laptops and tablets in class. Close that screen!

How many students do you have in an average class? My final years teaching, I had between 23 and 26 students, and was teaching 4 units per quarter. One of the reasons I'm not teaching anymore -- despite my love for it -- is that I did, in fact, offer endless hours and allowed my students to make revisions and I just couldn't do it anymore, physically or intellectually.

I hear you, and I'm lucky. My writing classes are small, 16 to 18 students, which makes the regular revision sessions do-able.

You pointed out a number of problems with academia as it's currently configured, so people are probably curious as to what you consider to be some possible solutions. Reducing the reliance on adjunct labor? Shrinking class size? De-emphasizing the careerist model of academic achievement?

Academia is the Titanic. I have suggested that schools stop spending so much money and labor on useless research in the humanities, and instead shift that labor and money to teaching. Pay adjuncts more money and hire them as lecturers on regular contracts. Make no research demands upon them. For research professors, ask them to slow down their publication pace -- get off the industrial model -- and reward them for contact hours with students. And let's close down graduate programs that don't place 80 percent of their Ph.D.s.

You can imagine how popular that suggestion was.