This historic feud won't have a storybook ending 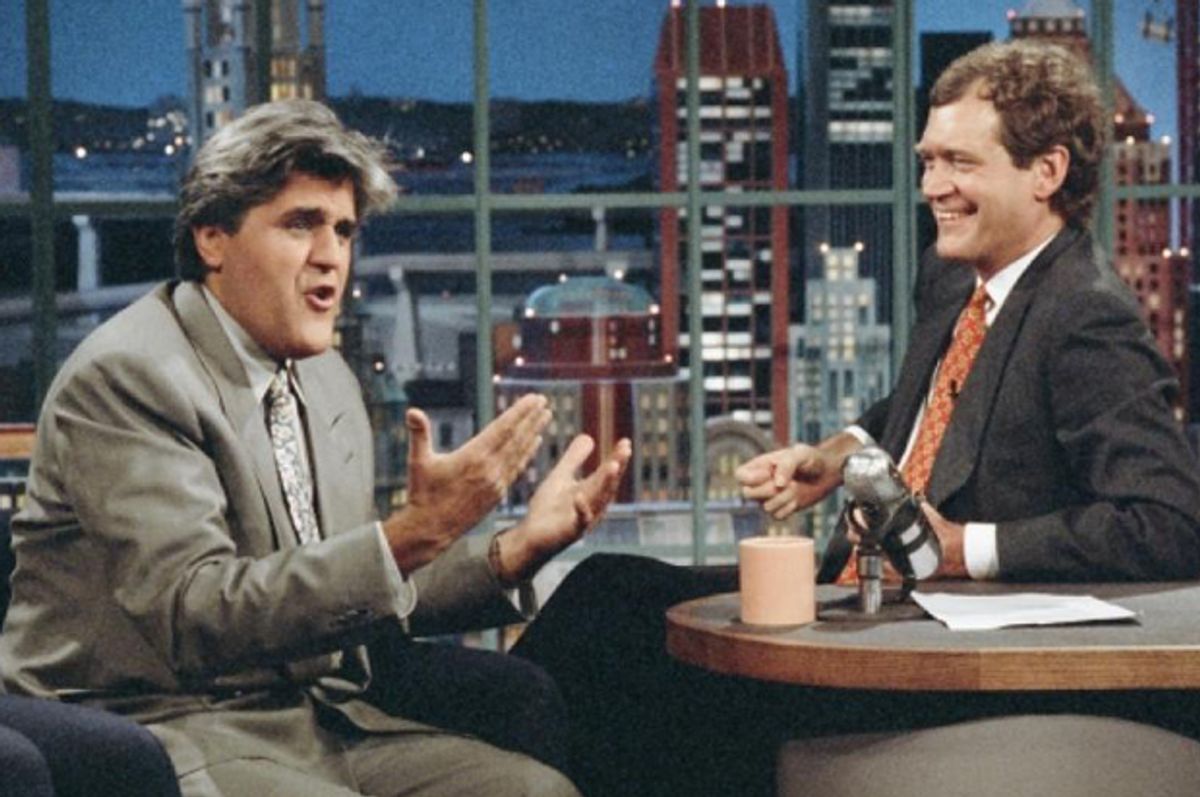 The rivalry between David Letterman and Jay Leno is one of the most storied rifts in showbiz, dating back to when Leno outfoxed Letterman for "The Tonight Show" hosting gig back in 1993. Things have simmered a lot since their mid-Nineties rating war, but that doesn't mean we'll get to see Letterman go toe-to-toe with his old foe during the final week of shows. As Letterman explained to Howard Stern last night, he refused to be a guest for Leno's last week of shows in 2014 so as not to steal his thunder, and Leno "may feel the same way about this situation."

While neither has had nice things to say about the other over the years, Letterman has been far more vocal about his distaste for his "Big Jaw" rival — and the many shakeups at NBC over the years have given him plenty of excuses to whip out some zingers. Here’s a look back at some of his most scathing barbs to date:

1. In December 2008, it was announced that Leno would move up to primetime in a 10 p.m. slot while Conan O'Brien would take over “The Tonight Show” — a game of musical desks that Letterman was more than happy to weigh in on. “Well, President-elect Barack Obama met with Al Gore yesterday, earlier today. The meeting went well. Obama offered Al Gore the 10 p.m. slot. And he said yes,” riffed Letterman.

2. But two years later, NBC sparked outrage by moving Leno’s show back to 11:30 and bumping Conan to 12:05. All the late night comics piled on to throw potshots at the Peacock, with Letterman unveiling a Top Ten list outlining “Signs There’s Trouble at NBC,” as well as imagining an alternative version of the kerfuffle: “[NBC] gave 'The Tonight Show' to Jay ‘Big Jaw’ Leno… [but] he said, ‘Y’know, I’m having trouble staying up this late," Letterman mused. "Is there any chance you could put me on at 10 p.m.?”

3. The month that followed was peak Leno-bashing time. On the January 12 show, Letterman proposed a show about Leno called “Leno Victims Unit,” to tell stories of the “two kinds of talk show hosts: Jay Leno, and those who have been victimized by Jay Leno.”

4. Letterman took yet another harsh jab at his rival on January 13, commenting on Jimmy Kimmel’s show from the night before which he performed in character as Leno. “Last night on ABC, Jimmy Kimmel did the entire show as Jay Leno," Letterman said. "Jimmy Kimmel was so convincing as Jay Leno, they canceled him.”

5. Letterman continued to hammer Leno in his monologue throughout the month. Here’s what he had to say about NBC’s intention to maintain ownership of Conan’s intellectual property: “He can’t take his signature comedy bits with him. But that’s okay, Jay will take them.”

Needless to say, it was a fun January for Dave. As he put it on January 18: “I’m telling jokes and making fun of Jay Leno relentlessly, mercilessly, simply for one reason: I’m really enjoying it. It’s just fun!”

6. When Conan’s new show finally aired in November 2010, Letterman renewed his Leno-bashing campaign. Noting that "we gained an hour and they snuck in another talk show," Letterman checked in with O'Brien at the half-way point of his first episode, saying: "Everything's going fine, and, let's see...Yep, no signs of foul play yet."

And later, while discussing Hillary’s campaign denials, he threw in this jab: “Is she really not running, or is she just pulling a Leno?”

8. In a candid interview with Oprah in January 2013, Letterman tempered a cutting insult of Leno’s personality with some praise: “I think he's the funniest guy I've ever known... the smartest... wonderful observationalist... therefore, the fact that he's also the most insecure person I've ever known, I could never reconcile that.”

10. When Jay Leno’s retirement was announced, Letterman didn’t hold back, with a cutting monologue as well as a Leno-themed top 10 list. “It seems like we just went through this. Didn't we just go through this? Jay Leno now is being replaced, and this is the second time this has happened,” he joked “I mean, it's crazy. He's being replaced by a younger late-night talk show host–what could possibly go wrong?”