Iggy Azalea and Britney Spears lean in: "Pretty Girls" celebrates a macho, winner-take-all feminism — and not much more

The video for "Pretty Girls" is emblematic of a shallow "do what we like, get what we want" brand of empowerment 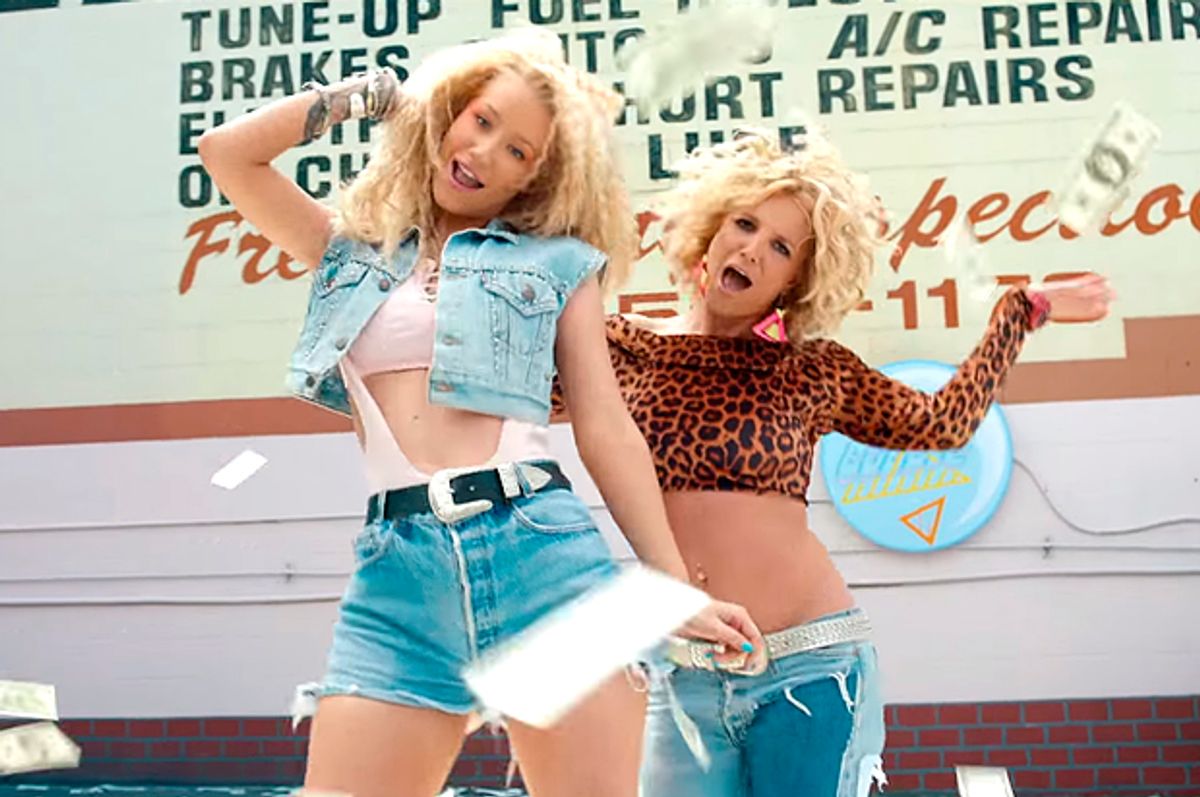 It started with the shoulder pads. And now we get Izzy Azalea and Britney Spears sharing a cell phones in a convertible. In between is the rise of what we could call winner-take-all feminism. The new video by the Australian model/rapper and the reformed diva shows just how far you’ve come, baby.

“Pretty Girls” begins with Spears filing her nails by a California pool as an alien shoots through the skies, lands and then emerges from the water like a creature from ‘80s MTV.

What makes this a document of the time is the way it plays with various kinds of sisterhood-is-powerful idioms in a way that brings to mind not older, humane forms of feminism but Sheryl Sandberg’s “Lean In” crossed with the male lineage of gloating and bullying. Compare it to a similar video from three decades ago -- the Go-Go's "Our Lips Are Sealed," also set in a convertible in L.A. -- and the growth of grasping mean-spiritedness over time is almost tangible.

Call it winner-take-all feminism, and it’s likely to be with us for a long time.

Where did it come from? Like a lot of what we take for granted in Anglo-American life, its roots are in the '80s, though one of its exemplars, Margaret Thatcher, was elected in 1979. It took a while to build, of course, and various kinds of “empowerment” rhetoric have pumped it up.

Earlier waves of feminist culture was about women's independence ("a room of one's own"), or about providing a woman's vision for a male-dominated world (ie. temperance, feminist anti-war movement, feminist critiques of corporate capitalism like Barbara Ehrenreich’s). Feminism was often tied to a larger movement for equality, morality and social justice. And even pop culture that had strong female heroes framed its struggle in humanitarian terms – in the movies “Heathers” and “Mean Girls,” it’s taken for granted that teenage girls can be as nasty as boys.

But what we've seen more recently – growing a bit every year since the shoulder-padded ‘80s – are cultural benchmarks like the "feminist" push by the NRA and gunmakers who design candy-colored firearms to fit into bras and tight jeans, the plutocrat feminism of the lean-in movement (women can be just as heartless as men!), and Beyonce's world-domination/ tears of a billionaire songs. (“My persuasion can build a nation,” she sings in “Rule the World.” “Endless power, with our love we can devour. You'll do anything for me.” — It’s one of the most popular gloating songs since Queen’s “We Are the Champions.”) The "Pretty Girls” video makes the whole lineage pretty explicit -- women can become, while using feminist signifiers, that obnoxious mix of envied and loathed — female Adam Levines, if you will. And in a way, it’s not just logical but just: Men have been awful and shallow, not to mention exploitative toward women – why not turn the tables? Why not say you will "wipe the floor with all the boys"?

For years we were told that women were more collaborative, less selfish and ego-driven, and that women in charge of companies and government bodies would bring a more humane and sensibly balanced vision and style. But for every Elizabeth Warren who’s fought for the underdog there’s been an iron lady like Margaret Thatcher or Jeanne Kirkpatrick or Condi Rice.

Women dissing men goes way, way back – in the American tradition it goes back at least as far as Bessie Smith and other early blues singers. You hear it done intelligently in Joni Mitchell and Nina Simone and Liz Phair and their inheritors. And why not? Men have been at the top of the power hierarchy for a long time and pop culture is sometimes the place where things can be rebalanced. But “Pretty Girls” reminds us that the worst parts of macho culture and Reagan-Thatcher’s winner-take-all seem to have won — by crossing the gender divide. Resistance is futile.