Indie cinemas fight back against bullying by corporate movie chains

3 chains own half of American theaters. Is the DoJ finally waking up from its long Reagan-induced slumber? 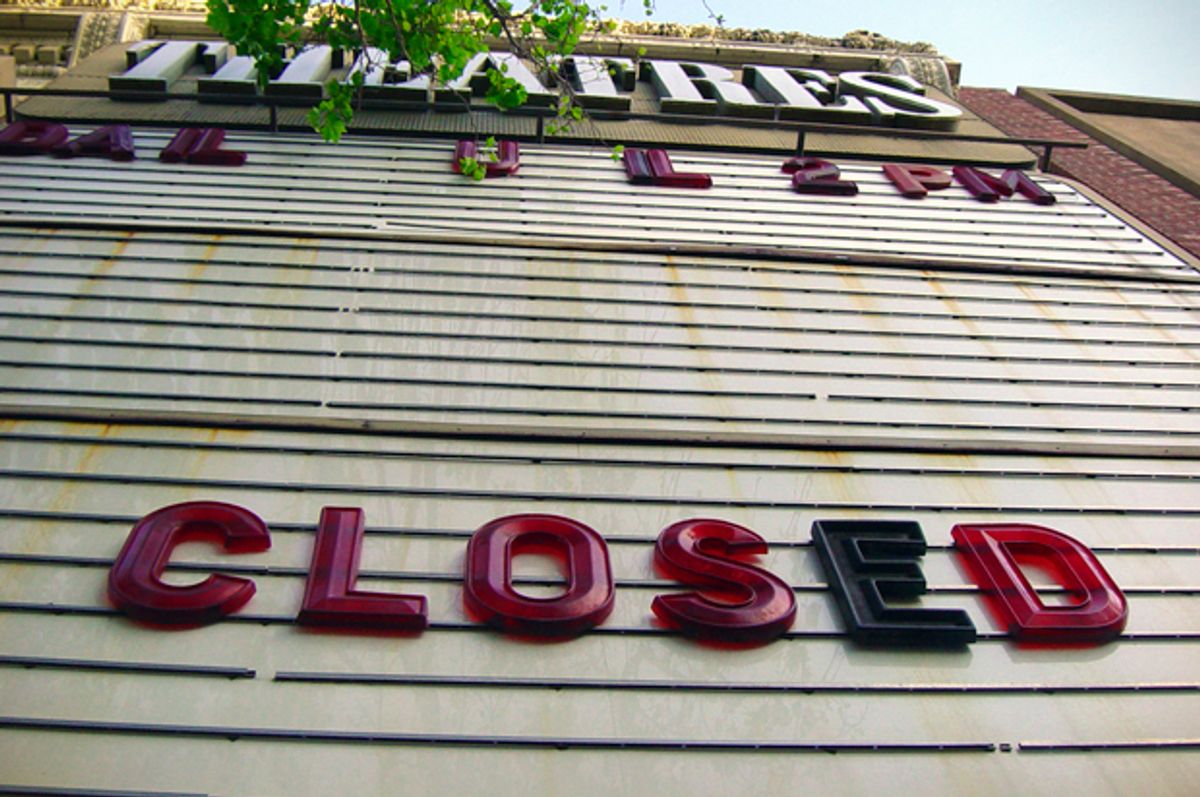 Few forces in American culture are as significant as monopoly capitalism: The domination of corporate chains shapes what we see, what we read, what we hear – and what we don’t. For all the talk about the liberating power of the Internet, the magic of the marketplace and the miraculous “long tail,” the Verizon takeover of AOL reminds us that what’s good for Wall Street titans and stock prices often limits choice for the the rest of us.

The Department of Justice – during the reign of both Democrats and Republicans -- has done a meager job at protecting Americans from corporate trusts, which wouldn’t be that big of a deal if that weren’t one of the main things it’s supposed to do. Since Ronald Reagan, the DoJ has mainly served corporate interests under cover of protecting consumer prices. (Consolidation and other kinds of corporate takeover often lead to a short-term decline in prices for consumers.)

Ayn Rand disciple Alan Greenspan denounced the Sherman Anti-Trust Act with, “No one can ever compute the price that all of us have paid for that Act which, by inducing less effective use of capital, has kept our standard of living lower than would otherwise have been possible." Robert Bork also advocated against anti-trust legislation. We saw this philosophy at work a few years ago when Justice sided with Amazon against the publishing industry, helping to deepen the undercutting of author advances and employment at publishing houses under cover of bringing us cheaper e-books.

Despite these dismal recent trends, Justice seems — finally — to be waking up to bullying by corporate movie chains. Just as the number of big publishers and major record labels has shrunk to just a few, only three chains — AMC, Cinemark, and Regal — own about half of American theaters. And if they have their way, they will crush the little indie cinema in your neighborhood as surely as Barnes and Noble destroyed the family-run bookstore that used to be next door.

After a long snooze, Justice is starting to pay attention, especially to some specific cases in Kansas, Texas and Florida. As a story in the Los Angeles Times reports:

The government is examining allegations from independent theater owners across the country that the big chains are using their market clout to block smaller rivals from receiving first-run movies.

Part of the issue here is what are called “clearances,” which started decades ago as a way to favor smaller theaters, but evolved into a way for chains to get exclusive rights to movies and block competition, often with independent cinemas nearby: They're typically a way a chain claims exclusivity for a movie against local competitors. More broadly, the big chains have leverage with movie distributors in the same way Amazon and Wal-Mart have with their respective suppliers. It’s all another step in the neoliberal U.S. economy’s move toward a state of winner-take-all.

It’s too soon to tell how much muscle Justice will really bring to this – trust-busting is not what it was during Teddy Roosevelt. But the government has exerted serious force against theater chains before: The Supreme Court decision known as the Hollywood Anti-Trust Case of 1948 broke up the movie studios’ ownership of theaters, and led to the crumbling of the old studio system, the growth of art-houses, and, decades later, the burgeoning of a less corporate-toned Hollywood in the “Easy Rider, Raging Bulls” era. (In the ‘80s, of course, things were re-consolidated, in slightly different ways, and we got a tub-thumping corporate cinema of sequels and action films.)

Will the DoJ lead to a flowering of one-and-two screen indie theaters across the country and the return of a ‘70s style maverick cinema? Well, probably not: At this stage the fight is mostly who can get the big blockbuster sequels on their screens first. But as we've seen with record labels, music clubs, publishing houses, and bookstores, the more companies funding and presenting culture, the more options cultural consumers have. And if indie bookstores can make a comeback thanks to knowledgeable staff and carefully-curated stock, why not small cinema? The growth of independent cinemas in previous era -- as well as smaller boutique chains -- helped the exposure of foreign and independent film, and the clutch of monopoly shuts it all down. Limiting bullying by big movie chains won't solve everything at once, but anything that turns back the corporate dominance of English-language culture deserves our applause.