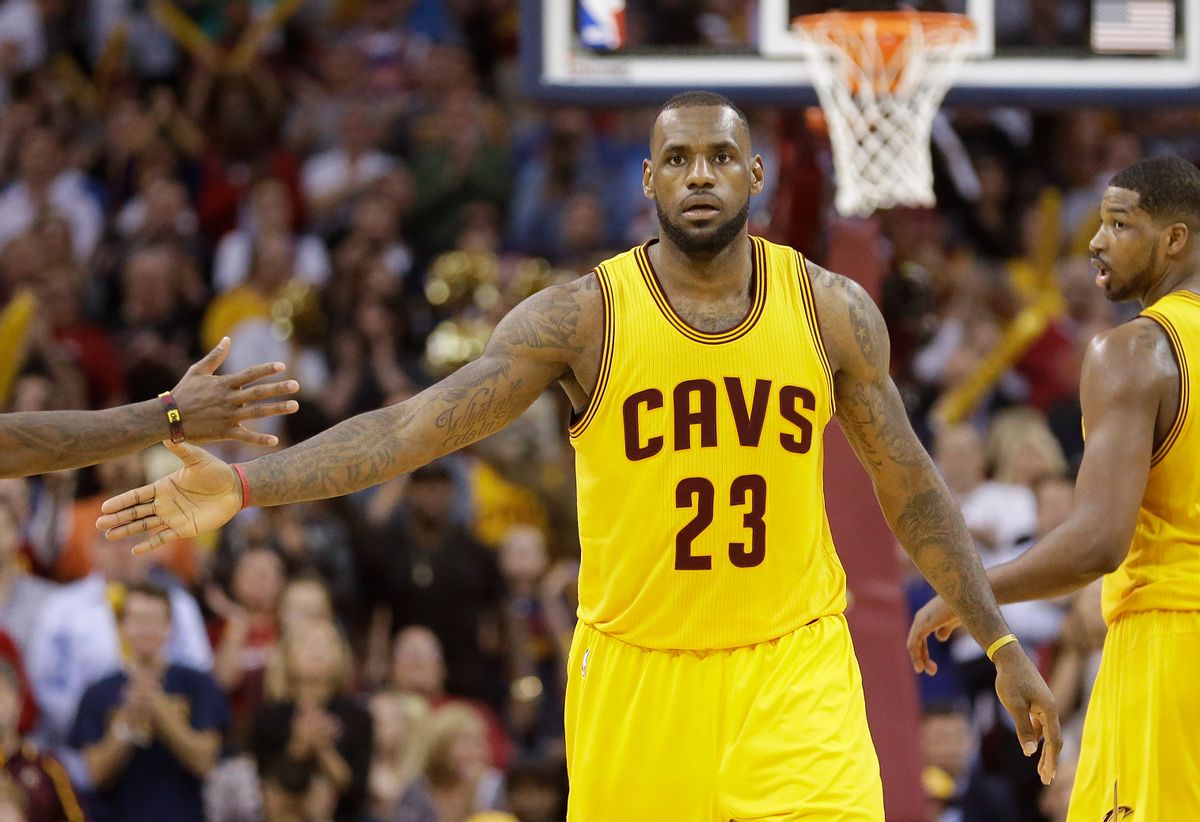 Cleveland Cavaliers forward LeBron James slaps hands with a teammate after scoring against the Chicago Bulls during the second half of Game 5 in a second-round NBA basketball playoff series Tuesday, May 12, 2015, in Cleveland. The Cavaliers won 106-101. (AP Photo/Tony Dejak) (AP)
--

CLEVELAND (AP) — With the "Big 3" reduced to the "Banged-Up 2," LeBron James again showed why he's Cleveland's one and only.

James scored 38 points, Kyrie Irving added 25 and the Cavaliers held off Chicago's charge in the fourth quarter for a 106-101 victory over the Bulls on Tuesday night to take a 3-2 lead in their testy Eastern Conference semifinal.

Showing no ill effects from a sprained left ankle, James added 12 rebounds, six assists, three steals, three blocks and didn't have a turnover in 41 minutes to ensure the Cavs will again play at home this season. The four-time league MVP was locked in from the start, imposing his will on a game the Cavaliers had to have.

"I commend him for putting us on his back," Irving said.

Cleveland can wrap up the best-of-seven series and advance to the conference finals for the first time since 2009 with a win in Game 6 on Thursday night back at United Center in Chicago, where the teams exchanged buzzer-beating victories last weekend.

The drama wasn't quite as high in Game 5, but it was close and it was intense.

Jimmy Butler scored 29 and Mike Dunleavy 19 for Chicago. Derrick Rose scored 16, 12 in the first quarter, but the star guard shot just 2 of 15 in the final three quarters and aggravated a shoulder "stinger" he sustained in Game 1.

Fueled by an altercation that led to the ejection of Chicago's Taj Gibson, the Cavs led 90-73 with 6:09 left and then had to hold off a furious comeback by the Bulls, who got within 101-99 on Butler's 3-pointer with 1:18 left.

Cleveland, though, got a huge offensive rebound by Iman Shumpert before Irving, playing with surprising speed and agility on a sprained right foot and sore left knee, made four free throws in the final 17 seconds.

James, though, was the difference — as usual. After a few un-LeBron-like performances in which he was sloppy with the ball, James had his first error-free game this season.

"Yay!" he joked, feigning surprise. "No turnovers! That was the first stat I was looking at after the game. I was trying to be efficient for my teammates and I was very efficient."

The Bulls were missing big man Pau Gasol, who sat out his second straight game with a strained left hamstring and didn't sound confident before Game 5 that he'd be ready by Thursday.

They also played the final 10:25 without Gibson, ejected for kicking Cavs guard Matthew Dellavedova. Gibson shoved Dellavedova to the floor and then kicked the scrappy backup, who angered the Bulls forward by clamping his legs around Gibson's. Players on both teams exchanged shoves and pushes before the officials got things under control.

Gibson could be facing further discipline from the league, and Dellavedova, too, might get slapped for his role.

"I was surprised (to be ejected)," Gibson said. "I really just tried to release my foot because as soon as I got up off the ground, I just felt somebody tugging on my leg."

James was on the bench for the fracas and made sure none of his teammates went on the floor. James called Dellavedova "the toughest guy on our team" and promised the Cavs won't tolerate any rough stuff.

"We just want to play ball," he said. "But we'll protect our brothers."

The Cavs were sparked by the incident and opened a 90-73 lead before the Bulls came charging back. Dunleavy scored six points in an 11-0 run that got Chicago back in it before the Cavs gained their composure and closed it out.

"I love the way that we fought back," Rose said. "I thought we had a crack at it, we just didn't execute right."

James, who came in shooting just 38 percent in the series, didn't show the slightest signs of being slowed by the sprain he sustained late in Game 4. He ran the floor with abandon, posted up whenever possible and seemed intent on taking care of the Bulls by himself.

He scored Cleveland's first 12 points of the second quarter. James finished one drive by powering through Nikola Mirotic, who couldn't stop the 250-pound, wine-and-gold-clad truck. After the basket, James glanced at his biceps and then brushed his arm as if flicking off a bug.

"We were slow. He was quicker," Bulls coach Tom Thibodeau said.

MAN IN THE MIDDLE

Cleveland's Tristan Thompson came up big again, adding 12 points and 10 boards in 38 minutes. He's filling in for Kevin Love, who is out following shoulder surgery.

Mirotic dropped the game's longest shot, hitting a 50-footer at the horn to end the third, bringing the Bulls within 80-71.

The Bulls jumped to a 10-point lead in the first, but shot just 4 of 22 in the second quarter.

Bulls: Thibodeau was "disappointed" to learn coach Monty Williams was fired by New Orleans despite leading his team to the playoffs. Thibodeau and Williams were assistants on the U.S. national team last summer. "He's a great friend, a great coach and more importantly a great person," Thibodeau said.