Sex: The last taboo of YA literature? Not anymore!

YA stories give us a portrait of sexual intimacy born of desire, of passionate love, of playfulness and fun and joy 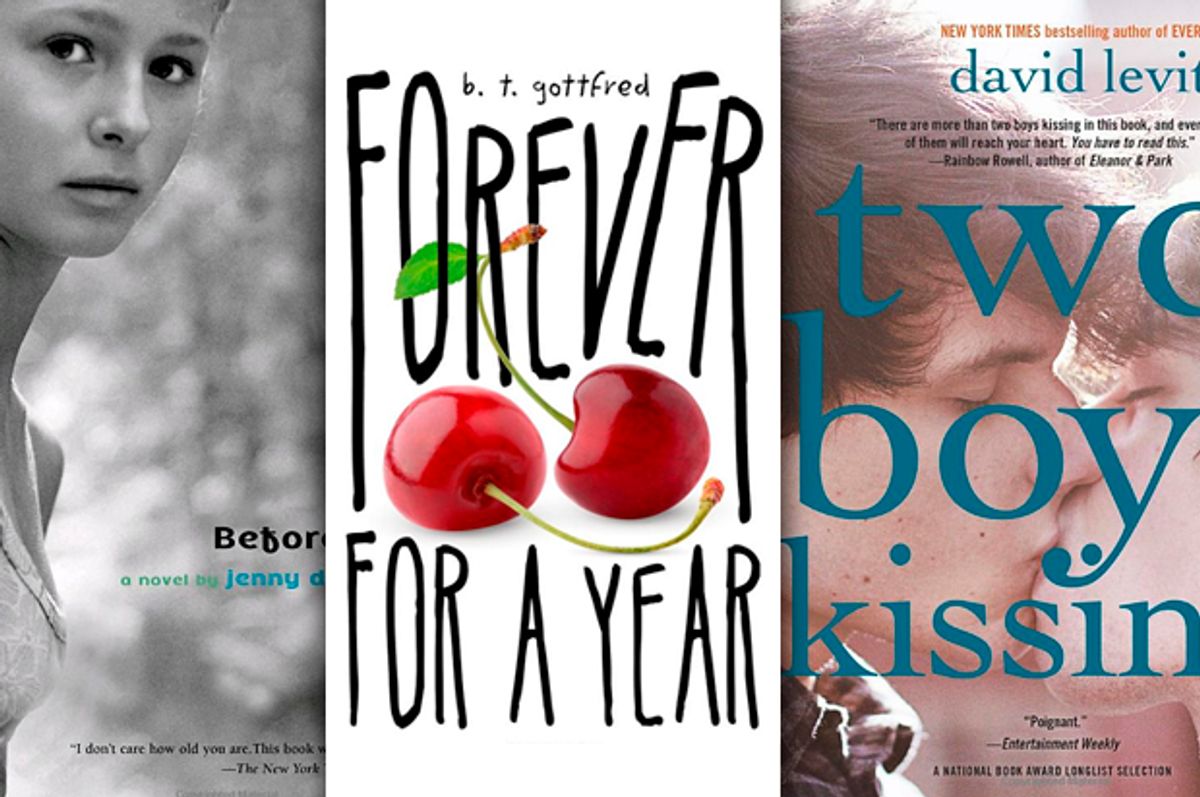 For a long time I swore I’d never write a sex scene. Even writing a kissing scene was daunting, but then I grew to enjoy them, and soon I was doing what was once unthinkable: I wrote a sex scene, then another, and implied a third. I blush a little every time I think about them, and I spent a lot of time considering deleting them. Now that they are out in the world in a YA novel, people will know I sat down at my computer and had all of these sexy thoughts. (Hopefully my father will never come upon them, for instance.) But more important than any hesitation I have about revealing my desires through a story, I want my novels to be full of romance, ideally the kind that would have made me swoon when I was a girl still in high school.

And romance and sex can — and should, at least at times — go together.

In high school, well before the age of the Internet, I received little to nothing in the way of sex education. I grew up Catholic, and my parents never talked about sex. Sex scenes in novels for someone my age nearly didn’t exist. My friends and I relied on each other to figure things out. For better or for worse (and Judy Blume’s "Forever" aside), finding out about sex was a process of discovery by doing, of listening to the desires of heart and body as we moved forward into unknown but potentially exciting — and pleasurable — territory with our partners. This, of course, can be a risky and dangerous method of sex education.

Today, when I’m not being a YA novelist, I’m a professor, and my research involves college students’ attitudes about sex, romance, hooking up and relationships. For the last eight years, I’ve given lectures about this research at well over a hundred colleges and universities across the United States, and I’ve spent a lot of time talking to students about what good sex looks like to them (if they already have an idea) or what it might look like (if they don’t). College students are typically sexually active to some degree, yet it has surprised — and dismayed -- me how many have never stopped to wonder what they want from sex, and how very few have been invited to reflect on what good sex might look like by their teachers, professors, parents and other adults in their lives.

Let me clarify: College students are quite educated about the technicalities of sex. How it gets done. Different positions. What’s expected (at least theoretically) from men and from women, and according to a variety of sexual orientations. Many students get a lot of their education through watching pornography on the Internet. But this sort of education — the technical kind — only gets a person so far, and of course, it’s full of biases about gender and it’s often full of violence too. It took me a long time and a lot of conversations before I realized how many young men and women do not have sex because they want to, or because they can’t help themselves, or because it’s what their bodies demand of them and what their partners and relationships inspire from them. Sex, at least among college students, is often an activity like any other, something to get done because it’s just what people do. It’s often a little like volunteering after school or playing the flute in the band for the sake of getting into the college of your choice: You do it not for the sake of passion, love and desire, but because it’s what seems to be required of someone your age. You learn to imitate what you’ve seen about sex online because it’s easier than engaging in the intimacy and communication required to find your own way with a partner.

I want teens and young adults to experience sex as a positive force in their lives, but figuring out who we are as sexual beings takes work, experimentation (beyond our traditional understanding of what sexual experimentation might be) and a lot of reflection. College students and young adults today are mainly offered brief, school-led tutorials about condoms, pregnancy and STI-prevention, maybe (if they’re lucky) some how-to’s about orgasms—nearly all of this education detached from the context of romance and love, and what it means to be in relation to one’s partner (aside from the importance of gaining consent from that person).

This renders their sexual education, in my opinion, impoverished.

Lately, I’ve thought a lot about the extraordinary, plentiful and accessible resources for contemplating all of the above that are the YA novels teens read before they arrive at the college gates. Take Jenny Downham’s "Before I Die," which has one of the most beautiful, explicit, joyful and soulful sex scenes I’ve come across in all my years as a reader. I find myself wanting to hand out copies of this novel to audiences at my college lectures, explaining that somehow, in Downham’s story about a dying high school girl, she offers a glimpse of sexual intimacy and fulfillment between young lovers as glorious as we can hope for in our very own lives.

Then there are Katsa and Po from the beloved "Graceling" by Kristin Cashore, whose hand-to-hand combat in the forest gives way to a more beautiful sort of tangling between body and heart. More recently, the joys of first love and first times are quite vibrantly and extensively described (with no detail spared) in the hilarious "Forever for a Year" by debut author B.T. Gottfred, about two high school freshmen, Carolina and Trevor, who can’t keep their hands off each other. Some of my favorite sex scenes between girls in love are found within emily danforth’s "The Miseducation of Cameron Post" and Malinda Lo’s "Huntress," and (at least voyeuristically so) in Tanuja Desai Hidier’s "Born Confused" when protagonist Dimple accidentally witnesses her cousin Kavita joyfully coupling with her girlfriend. As far as boys and sex scenes go, David Levithan has mastered the genre, but never more so than in "Two Boys Kissing," which treats readers to quite a lot of excellent sexual intimacy beyond all the excellent kissing.

Sex scenes in YA, the kind that (gulp) turn us on and make our cheeks flush and get our hearts racing, have never been more important than they are now. Stories that give protagonists flesh and bone and heart and all that goes with being in a body also give us a portrait of sexual intimacy born of desire, of need for one’s partner, of passionate love and want and its fulfillment, of playfulness and fun and joy. The wonderful thing about reading stories is that they allow us to try out and try on, safely, all sorts of possible sexual experiences and identities. What’s more, in YA novels we get a narrative arc that extends far beyond the explicit visual of a sex act gotten from pornography, or the how-to’s and the what-not-to’s of a sex education class, and it’s the narrative arc in which the sex is embedded that helps us to imagine ourselves hoping for — and asking for — more than just another activity that probably needs getting done.

We, who are engaged in the business of writing and teaching and distributing YA novels to the young people we teach and care about, need to round out the basics and visuals they are already getting. We need to give teens a variety of examples of what sex might look like — gay, straight, lesbian, bi, transgender, all of it. Most of all, novels can communicate to readers that sex is a many-layered thing, that there is no right way or wrong way about it (save when we get into the waters of sexual violence), or anything required that we do or do not do; and that learning to listen to the desires of the body and of the heart is often the best way into sexual experience.

Sex used to supposedly be the “last taboo in YA.”

I’m glad it is no longer. I’m glad I’ve gotten past my own nervousness about writing it into my novels. I hope that the genre that is YA continues to expand its horizons, giving its young audience many, many good sex scenes to choose from, of boys with boys, girls with girls, girls with boys, and everything in between.

Donna Freitas is the author of the forthcoming YA novel "The Tenderness of Thieves," and "Sex and the Soul: Juggling Sexuality, Spirituality, Romance and Religion on America's College Campuses."