Wingnuts have weaponized Jesus: How the religious right hijacked Christianity

A remarkable new Pew study shows that fewer Americans than ever identify as Christian. There's a good reason why. 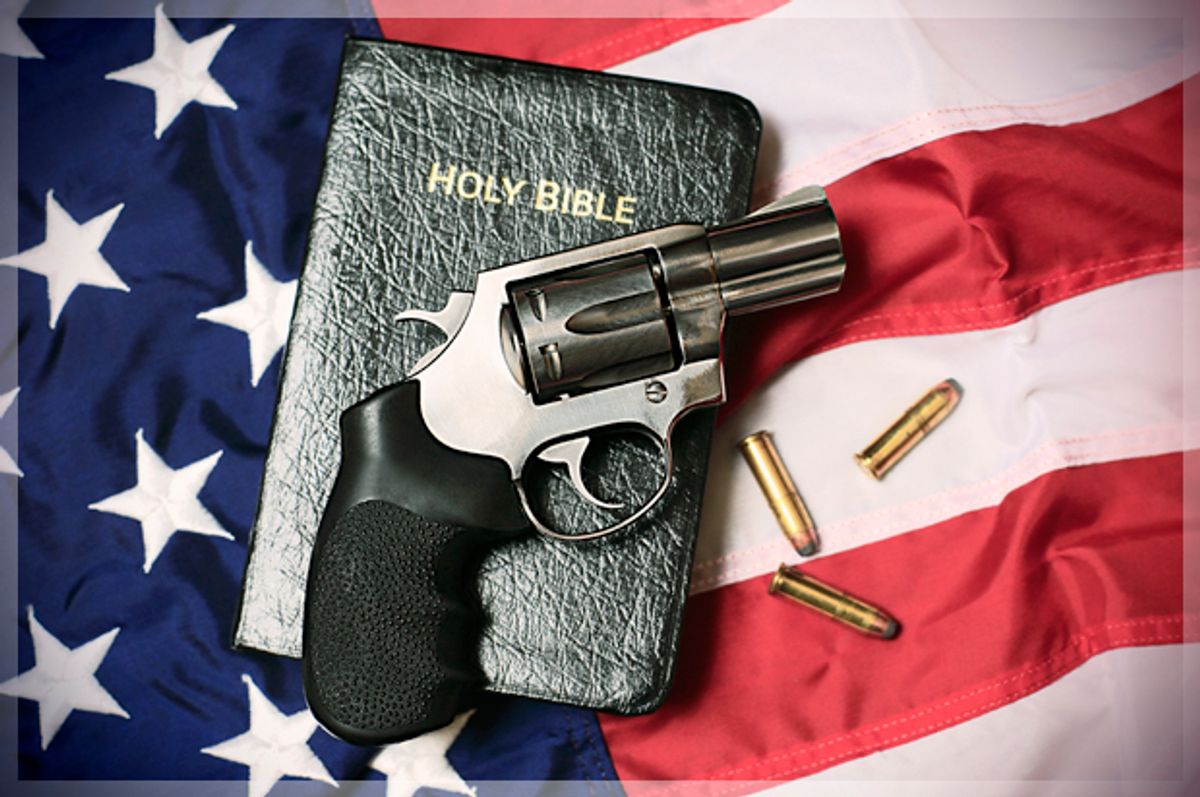 Just a few days ago, I attended a graduation in Northern Nevada. After a long sectarian prayer, the lieutenant governor of Nevada, Mark Hutchison, stood up to offer remarks, and he couldn’t help but pander to religious voters with incessant talk of his Mormon faith. This is an annoying but expected part of my life, so I ignored it -- until he went too far: “We live in a religiously based society,” he opined.

America is not at all “religiously based,” but instead is a constitutional republic based on the rule of law, and I was dismayed by his casual embrace of theocracy in our religiously diverse society. I sent Hutchison a complaint letter, which he promptly ignored. As an American and a government employee, religious coercion and insult is a casual part of my daily life, but after many years, this may finally be changing.

Yesterday, Pew released an exhaustive study of religious affiliation in America, showing a shocking growth in not only people with no religious affiliation but also a massive growth in people professing to be atheist and agnostic, now measured at 7 percent of the total population. This percentage is greater than that of Jews, Hindus, Muslims and Hutchison’s own religion of Mormonism combined. It’s was a fine coincidence to see this news just a week after listening to the self-appointed, self-righteous preacher-in-chief of my home state wax poetic about America’s religiosity.

The 2016 presidential race is just beginning, and religious posturing is already front and center from the right. The favored narrative amongst the GOP candidates is now about the “religious persecution” of Christians, a complete fabrication by political opportunists trying to exploit changing demographics. The Pew Study shows that about 70 percent of America still identifies as Christian. Their lead in the contest for hearts and minds continues to dwindle, yet the idea that they are somehow “oppressed” is beyond absurdity. And this all-or-nothing, self-pity narrative is, I would argue, helping to scare Christians away from the faith.

Pew does not try to analyze “causality” for this shift, but I have theory: Christianity has been weaponized. It is used as a means to oppress and divide people, like atheists, gays, minority faiths and outspoken liberals. Rightwing politicians have transformed Christianity into a cudgel that they use to beat down progress. This makes me almost pity liberal Christians, who must now choose between their faith and their ideals. There are many Christians who believe in alleviating poverty and who support the rights of gays and other faiths. They have been shouted down and are now unwelcome in much of “American Christianity.”  The Christianity created by the political right features a very white and muscular Jesus who loves “Guns, Grits and Gravy.”  He’s the kind of Jesus who might steal your girlfriend or get in a bar fight.

Turning Jesus into just another partisan political issue has diminished the religion in ways that atheists could only dream, and the comically white, American Jesus of Hutchison’s faith has held a boot to the neck of this country long enough.  Pardon me, if I gloat at the Pew numbers, but it’s about time.  Politicians like Mike Huckabee, Rick Santorum and Hutchinson have no one to blame for the numbers except themselves.  They’ve declared that you cannot be a “good Christian” unless you are a Republican and you certainly can’t be an American unless you are a Christian.  They are driving nominal Christians away from church and into the arms of Richard Dawkins, and they are making proud, patriotic Americans like me feel disgust at flag waving of religious extremists.

It is important to know that I’m a veteran, as is my father and brother. My son is serving in the Air Force at this exact moment in time.  I believe in America, but I have been made to feel unwelcome in my own country because I will not embrace the orthodoxy of public religiosity.  It has caused me constant pain, strife and even friendships, but I cannot pretend to believe something I don’t.  Those who demand religious fealty in this country are truly anti-American.

With the decline in Christianity, those who remain are becoming ever more angry, extreme and dangerous.  They can’t stand the idea that they are losing market share, so they continue to cling to the life of Christian oppression, even as they do the real oppressing.  Atheists know true oppression.  As an atheist, it is unlikely, if not impossible for me to ever hold elective office. In seven states, I’m not allowed to work for the government. These facts are beyond dispute, but they still don’t tell the whole story of real religious coercion of atheists.

As part of my work life, I speak at government-sponsored conferences. I attend one where as part of my official job duty, I personally call for a public “invocation.” Every year I stand on a stage in front of hundreds of people and call for prayers that personally offend me. I have many sympathetic friends there, and as I watch a sea of bowed heads, at least ten percent just look at me during the prayer, offering silent sympathy as I violate my own conscience.  It’s always a surreal moment for me that I drink in and mark down when it will finally come to an end.

I believe that people have the right to worship or not as their own personal beliefs dictate.  I want people to go to church or not, to have sex with whom they choose and eat shellfish or not based on the dictates of conscience.  Religiosity outside politics should be a celebrated personal choice.  I don’t want to be an “enemy” of Christianity, but the faith has been weaponized and politicized, and I have no choice except to do battle against it.  I’d rather the entire debate of the role of Christianity in public life just went away, because I’ve got better things to do.