The 'Late Show' host opened up about his anxiety, Jimmies Fallon and Kimmel, and more 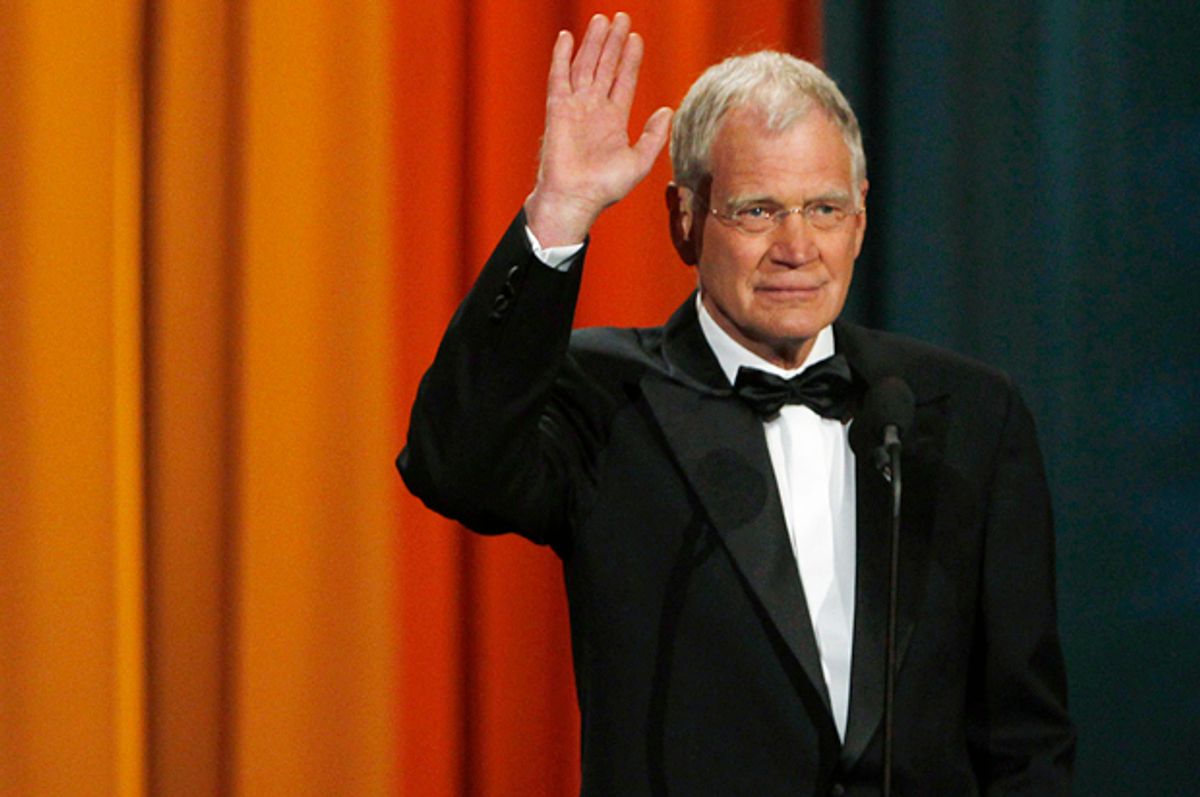 Letterman continues his farewell tour with a cover story by Josh Eels in Rolling Stone, in which he reflects on years past and looks forward to what’s to come — mostly spending time with his son Harry and hanging out at his beloved Montana ranch, where he is studying conservationism, raising a bison herd and has become "a pretty active rancher," according to pal Tom Brokaw.

His friend Jack Hanna recalls counseling him when he was looking at the Montana property, saying, "Dave, where you're looking at is one of the wildest places on the North American continent. You've got to be a real mountaineer. It's desolate. There's high winds. It gets very cold in the winter. It's one of the most solitary places in America. You don't see many people." To which Letterman allegedly responded: "That's it. That's where I'm going."

Here are six other highlights:

He has good things to say about the Jimmys:
Within the piece, Letterman referred to Jimmy Fallon’s show as "bright and colorful" and "a commercial for itself,” while calling Kimmel "friendly" and “very sweet.” He also acknowledges that his own show has been behind the times when it comes to making use of the Internet, calling it "a weakness of our show. I hear about things going viral, and I think, 'How do you do that?' I think I'm the blockage in the plumbing."

Leno’s retirement was what finally prompted him to hang up his gloves
Letterman refers to his old rival’s retirement as "the anchor in the water" that made him start seriously thinking about his own retirement, adding that it caught him off guard. "I thought Jay would have that job as long as he wanted,” he explains. "His ratings were strong; he showed no sign of slowing down. I know he loved it. I know it must have been hard for him.” He said he was “touched" by the news and called Leno to talk about it. "I said, 'Jay, are you actually retiring?' And he said yeah, you know, so and so. And I said, 'Well, I hope this is good for you, and I'm sorry you're leaving.' He was very nice and earnest about it."

He announced his retirement with the help of Pharrell
Once he decided he was leaving, the first person he told was Paul Shaffer. A few days later, he called the senior staff into his dressing room, and they recall it as a surreal scene, because Letterman had a “giant blood-soaked band-aid" on his face from a shaving cut and Pharrell’s “Happy” was playing in the background. "Here he is going, 'This 30-year career, we're finally bringing it to a close . . . ' and all I can hear is 'Clap along, if you feel. . . .’ “ recalls head writer Matt Roberts.

The sex scandal was the worst time in his life
Once again, Letterman describes the 2009 scandal, when he publicly revealed his sexual relationships with female staffers after receiving a blackmail threat, as an all-time low. "It was easily the lowest point in my life. I don't know how else to describe it. I felt like I'd dug a bottomless pit, and I was falling into it,” he told Eels. Letterman was also worried that he might lose his show. "Regina [his wife] knew more about it than I did, because, unbeknownst to me, she was looking up everything on the Internet. So one night in the kitchen, she came in and said, 'Well, I guess you're going to lose your job.' That hadn't occurred to me — but I thought, 'Well, of course.' How could the network be pleased with that kind of publicity?”

Anti-depressants changed his life
Letterman has long suffered with anxiety. "For years and years and years — 30, 40 years — I was anxious, and hypochondriacal, and an alcoholic, and many, many other things that made me different from other people,” he explains. "The hypochondriacal behavior... it sounds stupid, but it was killing me! Doctors kept telling me not to come back. 'Really, Dave. There's nothing.' Finally, I found out it's all a manifestation of anxiety. Once you realize that, you can self-monitor. Which I've found very useful." In 2003, he started a low dose of an SSRI, and says it changed his life. "I was suspicious, and skeptical, and nervous about it," he says. "But it changed my life. I used to have kind of a hair trigger; I used to put my fist through Sheetrock.” He also does transcendental meditation and has regular therapy, what he calls "an emotional tuneup."

He wants to do 'Comedians on Horses Getting Coffee’
While he’s not sure what he’ll do after retirement, he says he was “very irritated” when he saw Jerry Seinfeld's Web series, "Comedians in Cars Getting Coffee." As he put it: 'I thought, 'Well, that's the perfect idea, goddamnit.’ He says he has even considered doing his own version set in Montana, called "Comedians on Horses Getting Coffee." "I thought that would be so much better than riding around in a car, because then you see what the guy is made of,” he explains. Tom Brokaw, for what it's worth, likes the idea: "I'd like to see Louis C.K. on a horse, for example."