Marco Rubio's grand whitewash: Iraq, neoconservatism and the foreign policy catastrophe he wants us all to forget

What does neocon Rubio think of the Iraq war? He wouldn't have launched it, but he also thinks it was worthwhile 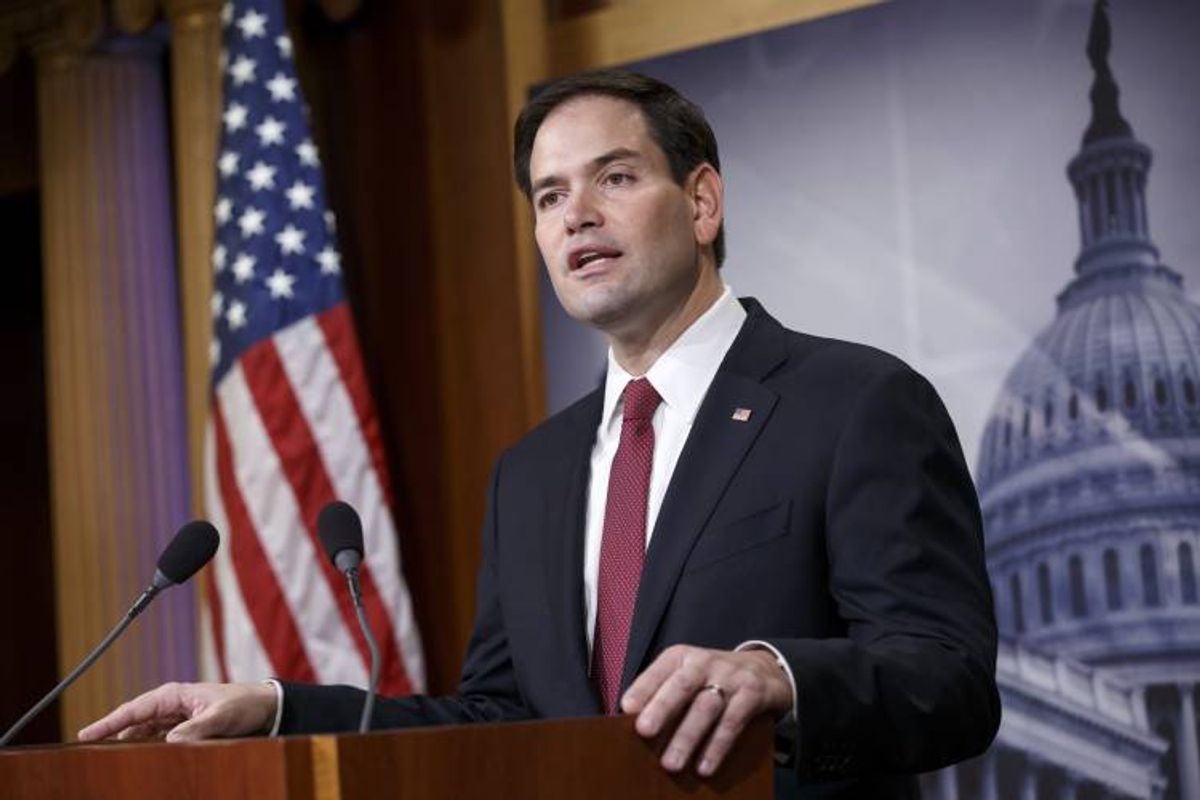 At this point, I’m starting to feel a little bad for Jeb Bush. Over the last week, he’s been getting absolutely hammered for his uncertain embrace of the Iraq war, and everyone – Republicans and Democrats alike – have enthusiastically jumped on him for endorsing the worst foreign policy decision of the last decade. And now here comes Marco Rubio with a big speech that unabashedly endorses the ideology that informed that same disastrous decision, and he gets celebrated as a foreign policy phenom.

And, on top of all that, immediately after his speech laying out his neoconservative platform, Rubio had the nerve to jump on the Jeb pig pile and announce that he would not, in hindsight, have supported the invasion of Iraq. That statement runs counter to pretty much everything Rubio has said about Iraq up to date – he called the war worthwhile in 2010 and said just two months ago that the war was not a mistake. So the Rubio Doctrine, as it stands now, embraces neoconservatism in theory and rejects it in practice.

Which is to say that Rubio has learned nothing from the past decade of foreign policy except how to talk about the Iraq war in ways that don’t upset his preferred policy of endless war. As I noted this morning, Rubio’s speech yesterday laid out a vigorous case for aggressive interventionism around the world as part of the “proud advocacy for America’s core values,” but didn’t mention George W. Bush and made only passing mention of Iraq (as one of his “frustrations” with Barack Obama’s foreign policy). At the same time, he warned about Iran’s growing “influence throughout the Middle East,” as if that’s a phenomenon that just sprung out of nowhere or is attributable to the “deterioration of our physical and ideological strength” under the current president. So neoconservatism works, just so long as you ignore its biggest failures (or blame them on the other guy).

This is a trick Rubio’s been pulling for a while now. Three years ago he delivered a speech at Brookings that made the case for intervention basically everywhere. “I always start by reminding people that what happens all over the world is our business,” Rubio said. “Every aspect of our lives is directly impacted by global events. The security of our cities is connected to the security of small hamlets in Afghanistan and Pakistan and Yemen and Somalia.” Conor Friedersdorf pointed out at the time that Rubio, in making this case, did not once mention Iraq. Not one word. “It's a perfect distillation of how ideological and divorced from empiricism the neoconservative project has become,” he noted. “A subject is raised at length – but the most relevant real world example isn't.”

Rubio’s since evolved a bit. He talks about Iraq now, but in ways that confound logic and history. He treats the rise of ISIS and the attendant destabilization of the country as problems to be solved through the use of military force, while steadfastly ignoring their roots in American military intervention. When asked to take a position on the conflict, he adopts the politically convenient but internally inconsistent argument that, with the benefit of hindsight, he would not have supported our invasion of Iraq, even though he supports the ideology behind it and views the war as a net positive. This is how he maintains the neoconservative fantasy and his own image as a foreign policy wunderkind.

Ignoring the outcomes of endless war also makes it a lot easier to make grandiloquent promises about the capacity of the American military to respond to and resolve whatever global crisis may arise. In yesterday’s speech, Rubio promised to “use American power to oppose any violations of international waters, airspace, cyberspace, or outer space,” and name-checked Russia, China, and Iran as adversaries that he’d stare down. “He simply takes for granted that the U.S. should always be ‘leading’ and committing itself to these fights without regard for the consequences,” Daniel Larison writes of Rubio at the American Conservative. “That’s not a doctrine anyone should want to follow. It’s a recipe for one foreign policy failure after another.”

That doctrine has already resulted in multiple failures, but Rubio’s figured out that if he sticks to the high-minded ideology and downplays the catastrophic outcomes, then people will still take him seriously.