Marco Rubio's murderous myth: Why his "noble lie" about American history is so dangerous

The GOP contender espouses a make-believe version of American history. Here's why you should be alarmed 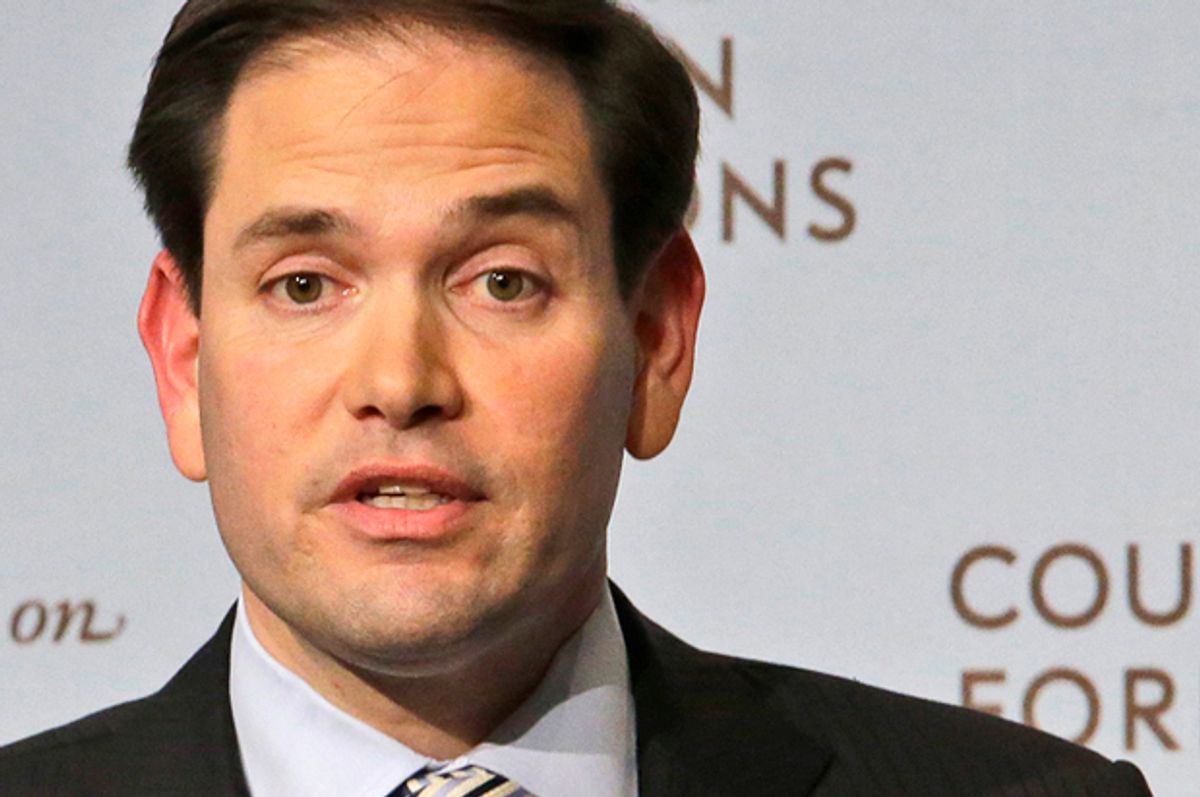 As my colleague Simon Maloy has already noted, Florida Sen. Marco Rubio delivered a big policy speech on Wednesday, his first since announcing his intention to be the Republican Party’s next presidential nominee. The speech, which was billed as an attempt to define a “Rubio Doctrine” for U.S. foreign policy, was a substantive disaster. (Or at least it was to anyone who grimaced when, in 2012, Rubio described George W. Bush’s record as “fantastic.”)

Rather than get into the weeds of deconstructing Rubio’s rhetorical sleights of hand, which Simon did a masterful job of already, I thought it’d be worthwhile to spend a moment focusing on one specific line of Rubio’s address. It’s a line that delighted Rubio and his speechwriters so much, they gave it its own standalone tweet. And it’s a line that helps explain why this would-be president is campaigning with a truly extremist foreign policy “doctrine.” The line is as follows, and it is utterly insane:

If you can’t see embedded tweets for whatever reason, here’s the statement Rubio thought was so nice he’d make it twice: “America is the first power in history motivated by a desire to expand freedom rather than its own territory.” Please, gaze upon it. Study it. Luxuriate in it. Roll it over in your mind. Once you’ve done so, the next question should be obvious — at least if you’ve got a rudimentary understanding of U.S. history. That question, of course, is where to begin? Rubio’s packed so much wrong into just this one little sentence, it’s hard to know where to start.

One option is to forego the specific reasons why the tweet should be considered a crime against history and to concentrate instead on how, even on its own terms, it makes no sense. For example: The United States is a country, not a person; and like every other insentient thing, it cannot be said to possess a will of its own. “America,” therefore, is no more driven by anything than your silverware, your bathroom door, or the last piece of gum you got stuck on your shoe. Like a character in the worst mumblecore film imaginable, America is completely devoid of motivation.

Admittedly, that line of criticism is more than a little pedantic. Plenty of other politicians have spoken of the U.S. as if it were a conscious being, after all. In fact, it’s a favored trope of the president. Let’s stipulate, therefore, that America does indeed have motivations: Will that help make Rubio’s declaration sound a bit better? Sadly, it will not, because the idea that a nearly 240-year-old country could be on one single mission is also deeply, profoundly stupid.

Think about it: When the U.S. was founded, it happened in large part because a lot of wealthy merchants in the North, and slaveholders in the South, decided they were tired of handing their money over to the King of England. Not doing that anymore was their motivation; and it was accomplished. But then it turned out that a lot of Americans found separation from the crown was insufficient. So they wrote themselves a Constitution, and after a lot of wrangling and arm-twisting, they ratified it. George Washington once again felt the cool breeze of freedom; but the folks who made up the Whiskey Rebellion sure didn’t.

Needless to say, I could continue. But I won't, for the sake of your sanity (even if there’s a part of me dying to find out whether Jefferson Davis was actually a freedom-fighter or actually not a real American). Suffice it to say instead that America, like any country, has been populated and run by lots of different people over multiple generations; and as tends to happen when you throw people together, they did not always agree. Some wanted to annex new territory in order to spread enlightened self-government, while others wanted it because they needed an excuse to buy more slaves. And some didn’t want to take it all. People — even Americans — disagree. Funny, that.

But the most obvious problem with this one remarkable little sentence is, of course, the way it pretends the millions of human beings who lived in North America before the states were united never existed. You remember these people; they’re the ones who were largely annihilated through disease and malice. They lived in what is now called the United States; and when they saw white Americans coming, they didn’t imagine themselves to be looking at purveyors of freedom. Their story alone obliterates any tenuous relationship Rubio’s narrative has with reality. His telling it all the same is what I find so revealing.

Because here’s the thing you need to understand about Rubio and, more generally, neoconservatives: They believe passionately in the redemptive, inspirational power of beautiful myths. It goes back to the worldview of Leo Strauss, the mid-20th-century academic who is widely seen as something of an intellectual godfather to the neoconservative movement. Strauss fancied himself to be a member of an intellectual elect, one that spanned eons and which he traced all the way back to Plato. And like Socrates’s protege, Strauss was a real believer that a “noble lie” was necessary to protect society from anarchy and nihilism.

Some of neoconservatism’s harshest critics described the idea of WMD in Iraq as a kind of “noble lie”; but I don’t think that’s quite right. A lie about a hidden nuke in the outskirts of Baghdad simply isn’t big enough. But the idea that the United States has always been engaged in a struggle to bring to the world a 21st century understanding of freedom? The idea that this inherent benevolence is what motivated people as different as George Washington and J. Edgar Hoover? The idea that the slaveholders who died at the Alamo did so in the name of liberating the oppressed? That’ll do the trick.

Whether Rubio is a buyer or a pusher of this noble lie and beautiful myth ultimately isn’t that important. What matters is that, whether by ignorance or choice, this is the world he lives in. It’s the world he’d wake up in every single day if he became president. And just like the millions of Native Americans he’s either airbrushed or forgotten, the human beings who’ll bear the weight of his fantasy — be they in Iran, Iraq, Syria or wherever he decides more freedom is needed — are disposable nuisances who serve no role in his glorious myth. For their sake above all others, let’s hope Rubio never becomes president.