Please reassure Rob Lowe that he is a desirable man: "Do I have a dadbod? I just need to know" 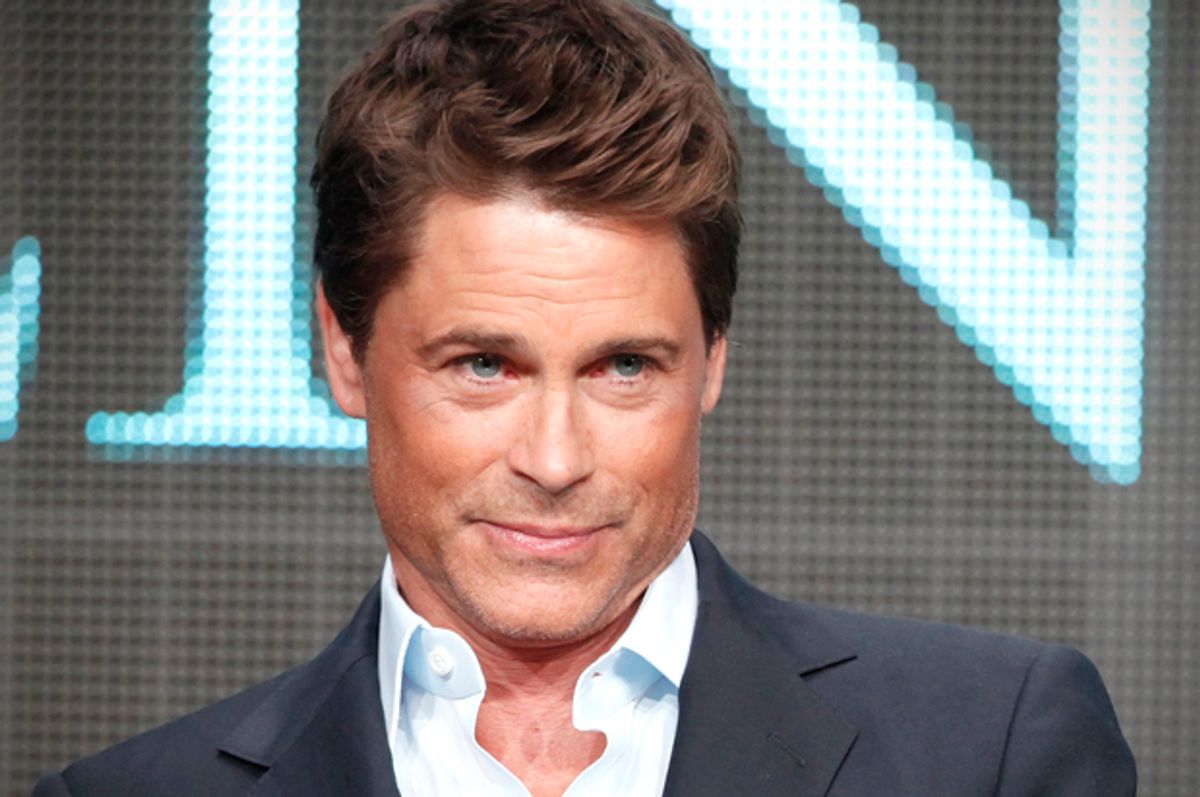 If you were going to take a bet on which of the actors of the ‘80s Brat Pack – the crew from “St. Elmo’s Fire,” say – were going to become the most fascinating figures in the 21st century, you might have picked Ally Sheedy, with her brooding black-Irish beauty. Emilio Estevez – star of the peerless punk film “Repo Man,” decent as a jock with a sensitive side in “Breakfast Club,” and son of an unimpeachably important American actor – also seemed like someone to watch. You could probably have placed a bet on just about any of them, even Demi Moore. But the one who seemed most marginal – hanging around mostly for his twinking blue eyes and well-cut jaw – has turned out to be the most protean of the bunch.

Rob Lowe broke through with “The Outsiders,” and wasn’t bad in “Hotel New Hampshire,” but his real emergence was with the 1988 sex tape scandal. This record of him with two women (okay, one was a 16-year-old girl) in Atlanta hotel room was one of the earliest of its kind – and a rarity in the pre-Internet era – opened the door to Paris Hilton, Kim Kardashian, Gene Simmons and countless other luminaries. It also – at least, starting around the time Lowe went on “Saturday Night Live” to joke about it – turned his whole career into a kind of postmodern stunt. All actors are by definition performers, but Lowe, who acted like a frat-boy idiot on film at a political convention and then went on to star in “The West Wing” and then "Parks and Recreation," was meta before the rest of us knew what meta was.

And now he’s become a spokesman for the “dadbod,” the latest cutesy neologism with about as much charm as terms like “man purse,” “guy date” and “mom jeans.” Check out the last part of this reliably shallow interview with The Cut about his new skin-care line.

On dadbod: I’m obsessed with this fucking thing. Did you know that I tweeted about it two weeks ago? I put it out there to my millions of followers:  Be honest with me: Do I have a dadbod? I just need to know. Because I’m not really sure what it means yet and I need to find out. They said absolutely not, although some wonderful internet sleuths found a photo of me when I was not at my finest and said, yeah, you have a dadbod. I am a dad and I have a bod. So by definition, I have a dadbod.

“I’m not pro or con [dadbod], but it's great that it is a real thing. My understanding of it is [that dadbod] guys are semi-jacked but have neglected this [points to decidedly anti-dadbod stomach], is that right? My new favorite term … are you ready for this? Skinny-fat. It’s a great one. Because it’s people who look skinny but aren’t, right?  I think it’s time to start objectifying men. I think it’s time.

Lowe’s previous Tweet, incidentally, went like this: “I am oftentimes purposefully behind the cultural curve, but this I need to know: What is a ‘dad body’, and do I have one?”

The responses ranged from predictable (“You are literally; a fine tuned machine,” tweeted one woman, who apparently thinks he’s a cyborg) to funny (“I feel like a dad body requires high-waisted jeans”), and apparently the actor’s ego was reassured.

But we’re excited to see what he gets started with his new term skinny-fat. (“Are you ready for this?” We’re not sure we are.)

A lot of the Lowe hijinks – the youthful affair with Nastassja Kinski, the hotel room romps, the alleged nanny-harrassing – made us think that he was a complex artist whose life and work were bound up in fascinating ways. And then he became a TV institution, first as the earnest Sam Seaborn and then as rigorously health-conscious Chris on "Parks and Rec." But we may have been wrong about his shape-shifting.

Lowe’s latest comments, and his excitement about distributing stuff at Nordstrom, makes us think we may have been right about him in the first place. Maybe he's just your basic shallow narcissist actor, after all. Whether he has a dadbod or not, we will have to defer to his Twitter following. The short answer is: On that one the jury is still out.