The movie is a bundle of contradictions, equally transgressive and traditional. Them's the breaks of feminist art 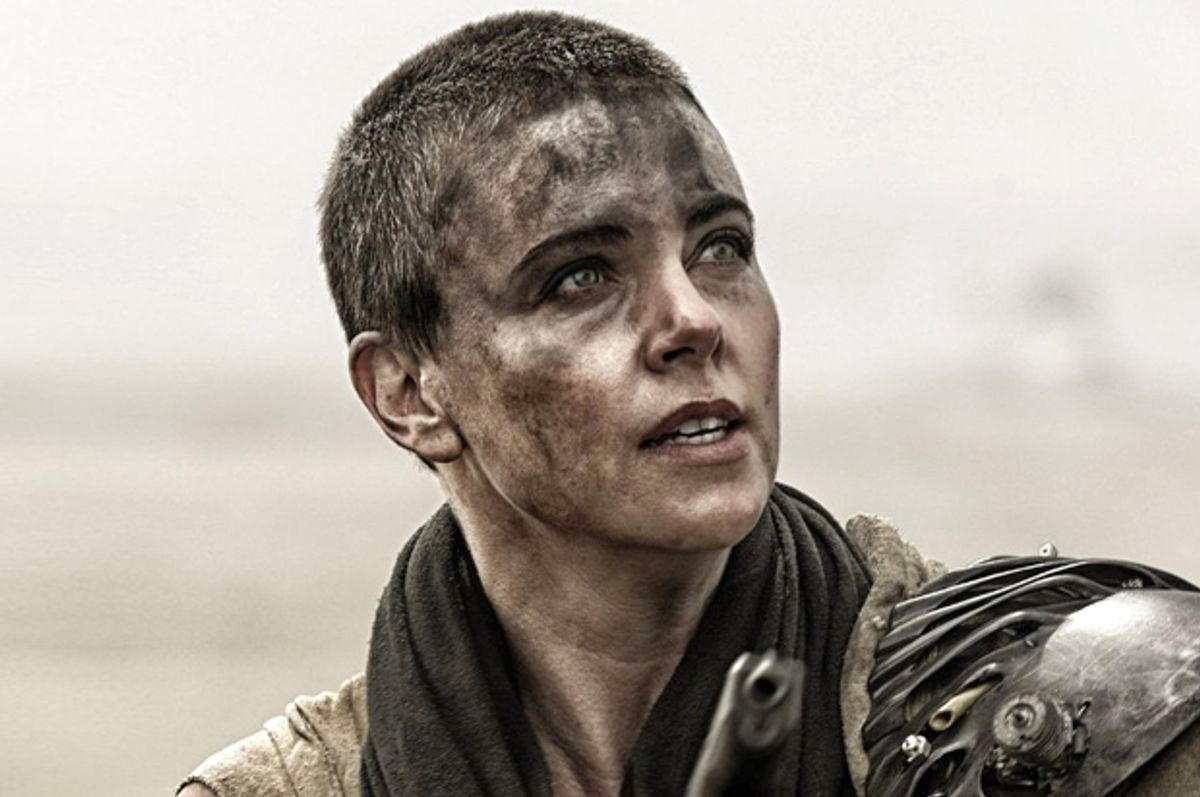 SOME MILD SPOILERS AHEAD. READ AT YOUR OWN RISK AND DO NOT YELL AT ME OK.

The reboot of George Miller’s apocalyptic road warrior franchise, “Mad Max: Fury Road,” is a feature-length car chase. The action sequences are visually stunning. The film’s tricked out tankers are grotesque works of art. The villains are cartoonishly dumb or vile or both. (Hello, fire-shooting double neck guitar guy who is strapped to the front of a mack truck!) Heroes are monosyllabic misanthropes. Everyone is wearing metal and dirt. Character development is paper thin. The dialogue… well, there really is no dialogue. It is 2015 and everything is as it should be in the “Mad Max” universe.

But there’s a question floating around the release that feels a little unexpected for a film that is mostly just explosions: Is it feminist? The answer happens to be knotty as hell, and that’s the real pleasure of it.

We have a cultural tendency to judge a film’s feminism by a narrow metric (see: the Bechdel test), but I’ve never found that to be particularly joyful or politically useful. There is feminism on Fury Road, but just how much and of what sort depends on if you're going by the Hollywood standard or one that already recognizes that female characters can think, feel, fight and bleed.

The plot, the raison d'etre for all of the driving and the blowing up and the maniacal laughter and the spray paint huffing, is straightforward enough. Evil guy Immortan Joe enslaves people, hordes water, wears a chest piece that gives him fake abs and breathes out of a lizard neck device. He also rapes the women he's enslaved and forces them to bear his children like breeding sows.

Imperator Furiosa, played by Charlize Theron with a really fucking cool shaved head and eye makeup thing happening, helps five of Joe’s “prized breeders” escape. (The "five brides" are played by Rosie Huntington-Whiteley, Zoë Kravitz, Riley Keough, Courtney Eaton and Abbey Lee.) The whole crew eventually runs into our other hero, Tom Hardy’s Max Rockatansky, who reluctantly signs on as co-pilot to the mission. The revenge and redemption plot finally comes together after Furiosa and co. link up with a gang of dirt bike riding matriarchs who want to take Joe down, too.

Feminist messages include, but not limited to: Do not enslave people. Water is a human right. Women are not objects. Being a motorbike-riding misandrist woman with a bag full of heirloom seeds is the very best thing you could possibly be.

And even though all of the characters are sparsely developed, Miller was clear from the start that he wanted to bring dimension to the women he was writing. “I was very interested in a female road warrior," he said in a recent interview with NPR. "And here she is, a character exactly equivalent to Max. They are protagonist/antagonist. They're the ones who go at it from the beginning. She is on this mission, and Max is a wild animal, trapped. And both of them are about their own survival.”

“Vagina Monologues” author and V-Day founder Eve Ensler also consulted with Miller, providing workshops on sexual violence to the cast and crew. (Ensler's involvement is not without controversy or complication.) Ensler called the movie a “feminist action film" featuring "such strong women."

But minimally fleshed out female characters and a nod to global violence against women were, it seems, too much for some people. Men’s rights activists lost their shit over the film, with one representatively vewy angwy guy calling it “feminist propaganda” and “a piece of American culture ruined and rewritten."

Quite the reaction when you consider the fact that, for all the talk about women protagonists and feminism, “Mad Max: Fury Road” is still just a movie about saving beautiful women from an abusive shithead. And while the female characters have agency, they also fit pretty neatly into how women are expected to behave, particularly in relation to men who have done them wrong.

Theron is the real leader of this road crew, but Huntington-Whiteley’s “Splendid” is the de facto head of the former brides. She wants peace, she tags feminist slogans on the walls of her dungeon palace and is active in driving the mission to get the hell out of desert dodge. But her compassion -- she has a rule of “no unnecessary killing" and refuses to load a gun during a major fight scene -- might be radical in a world so devoid of it, but it’s hardly breaking type in the genre. Hollywood is sick with movies about women who have spent their lives demeaned and brutalized by cruel men but who remain boundless in their capacity to forgive.

Splendid wants to end the cycle of inhumanity, but she’s in a chaotic world where people ride around on tanks and spear people through the skull. Her passivism, in the universe of the film, also feels like a kind of self-negation. And a reminder of the ways in which women are pushed to endure with love. To rise above, even if the price is death. (Spoiler alert: Splendid dies, saintly and pregnant.)

Keough’s character, “Capable,” is strong -- and endlessly forgiving. The abuse she’s experienced hasn’t hardened her. In one scene, she takes the face of one of Joe’s fallen war boys -- a semi-sensitive and injured minion of her tormenter, on her war rig on a mission to abduct her and her former captives and return them to the Citadel -- and assures him that he’s better than worst things he’s done. Through love, we see, he can be redeemed. Don’t all bad men think they are owed the love of a good woman? And don’t they usually get it?

Dying for your principles can be a feminist act. And forgiveness in the face of inhumanity is a radical thing. But is the unyielding compassion offered by these women feminist or just more of the same from a genre that tends to cast women as sex objects, victims or martyrs?

Kravitz’s “Toast” is the most clear-eyed of the bunch. She isn’t interested in redeeming anyone. She wants to get to the Green Place, forgiveness can come later -- or never. She loads guns, counts bullets. She is a kindred to the Many Mothers -- Furiosa’s people, the self-sufficient matriarchs who became nomads after their home was destroyed by men. (One of the mothers is also responsible for the film’s most misandrist line: “One man, one bullet.”)

“Mad Max: Fury Road” is a movie about cars and weapons and brutality that gives women, like men, cars and weapons and brutality. But as far as far as feminist revenge fantasies go, this isn’t SCUM Manifesto. I’m glad the women of Fury Road are fighting and holding space while things go boom around them, but the movie still deals in plenty of traditional tropes about gender, violence and power. It is a film made by a man, named for a man and featuring mostly men. It does fine, we can always do better. So let the genre get flooded with diverse and maddeningly complicated representations of women, power and the many ways to kill people with a chainsaw while also riding a motorcycle that is engulfed in flames.

In the meantime: I would go watch it again. And definitely in 3D.