Pope Francis makes Tea Party heads explode: Why Steve King & Louie Gohmert have it in for the pontiff

GOP members are worried about what Pope Francis will say in his speech to Congress, and it's great 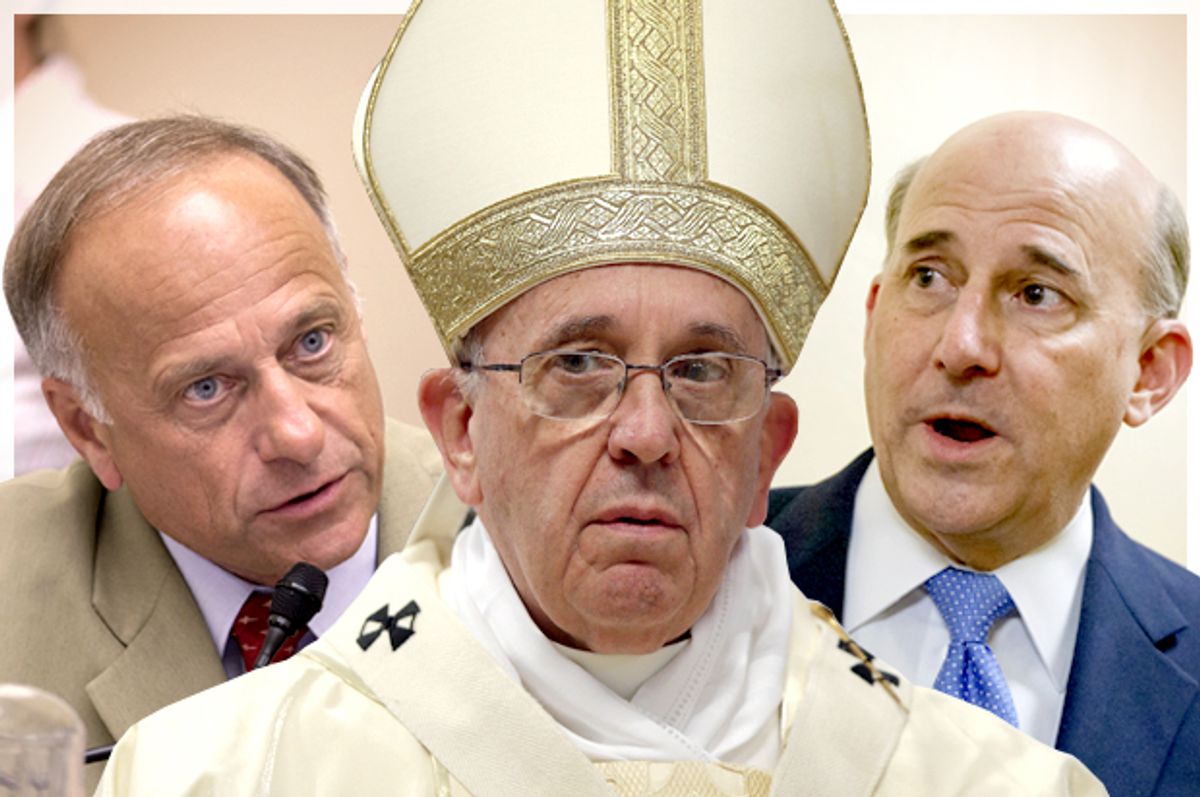 The Bishop of Rome is coming to Washington in September to address a joint session of Congress, and boy are things already getting frisky. Pope Francis is an extraordinarily popular Pope who's not afraid to wield that popularity for human rights and economic justice. In other words, he's well to the left of most members of Congress, and he may well get up in their faces about issues near and dear to him. Since you're sort of required to clap for the Pope, this is going to make for an interesting scene.

In late 2013, not long after his election, Francis wrote an extensive document making economic justice a centerpiece of his papacy. "Just as the commandment 'Thou shalt not kill' sets a clear limit in order to safeguard the value of human life," he wrote, "today we also have to say 'thou shalt not' to an economy of exclusion and inequality."

"Such an economy kills," wrote Pope Francis, denouncing the current economic system as "unjust at its roots" and one "which defend(s) the absolute autonomy of the marketplace and financial speculation." Such a system, he warned, is creating a "new tyranny," which "unilaterally and relentlessly imposes its own laws and rules."

On foreign affairs he's made his priorities known, too. Earlier this year, Francis helped broker the thawing of relations between the United States and Cuba, and just this week,the Vatican announced that it would sign a treaty recognizing a Palestinian state. As Patricia Miller writes in Salon, these sorts of moves aren't some radical break in policy for the Vatican. It's just that American conservatives were able to turn a blind eye to these actions before "rock star Francis" commanded their attention. "It’s more accurate," Miller writes, "to view this particular step in the Vatican’s relationship with Palestine both as a continuation of the Holy See’s long-standing support for Palestinian statehood and as an expression of Francis’ overriding interest in fostering international peace—and his unique ability and willingness to put his finger on the scales to do so."

The Vatican's recognition of a Palestinian state under Francis comes at a time when the Republican Party is more reflexively "pro-Israel" -- which is to say, pro-Netanyahu -- than ever. It's become routine, if not an outright litmus test, for Republican presidential candidates to reject the pursuit of a two-state solution to the Israel-Palestine conflict, a position that both Democratic and Republican standard-bearers have held for decades. The Obama administration has gone to great lengths to veto U.N. resolutions recognizing a Palestinian state as a favor to Netanyahu's Israel, and yet Republicans still assault Obama as working hand-in-hand with the Iranians to assure Israel's destruction. And now we've got an actual religious and political leader who has recognized a Palestinian state coming to address Congress.

The fine congressional reporters at Politico did that thing where they asked the usual funny, good-for-a-quote Republican suspects for their opinion on Francis' upcoming speech in light of his treaty recognizing Palestine and other heretical moves, like his criticism of unregulated capitalism. And the members were, indeed, good for various funny quotes.

Rep. Jeff Duncan of South Carolina is stunned to see the Pope getting so "political" and demands he rein in his activities to more traditional church-y stuff. "It’s interesting how the Vatican has gotten so political," Duncan said, "when ultimately the Vatican ought to be working to lead people to Jesus Christ and salvation." Iowa's Steve King echoed Duncan, saying he'snot sure that he’s as good of a politician as he is a Pope."

Rep. Tim Huelskamp holds the interesting position that Catholicism is agnostic on issues of poverty, and Francis should stick to what he describes as Catholicism's "non-negotiables," like its opposition to abortion and gay marriage and its support for school choice. "How do you deal with a poverty problem? There’s not a Catholic [fix], contrary to the arguments of certain economists that work at the Vatican... But there’s a Catholic view on life, on marriage, on the rights of parents and education. So I hope he sticks to this.” As for foreign policy, Huelskamp gives Francis his permission to speak to "faith and morals... but on foreign affairs, maybe not." Because morals certainly have no place in foreign affairs.

The quotiest of them all, Rep. Louie Gohmert, describes the Palestinians as "haters" and wants the Pope to know that they don't take too kindly to his style of Popin' down in East Texas. "The Pope is the head of his religion, and he makes those calls for himself," Gohmert generously concedes, "but I represent 700,000 people from East Texas and a vast majority agree with me."

It's fascinating to see these members trying to impose constraints on what's acceptable for the Holy See to say in his address to Congress. Just a few months ago, conservatives were apoplectic that anyone would dare criticize Benjamin Netanyahu's decision to trash the President's foreign policy before a joint session of Congress. The man has a right to speak his mind! It helped, of course, that Netanyahu's mind and the Republican mind were one and the same. Now the Pope might come and say "Palestinians have rights too" and everyone's all, Whoa whoa whoa, let's stick to the fetus here, guy.