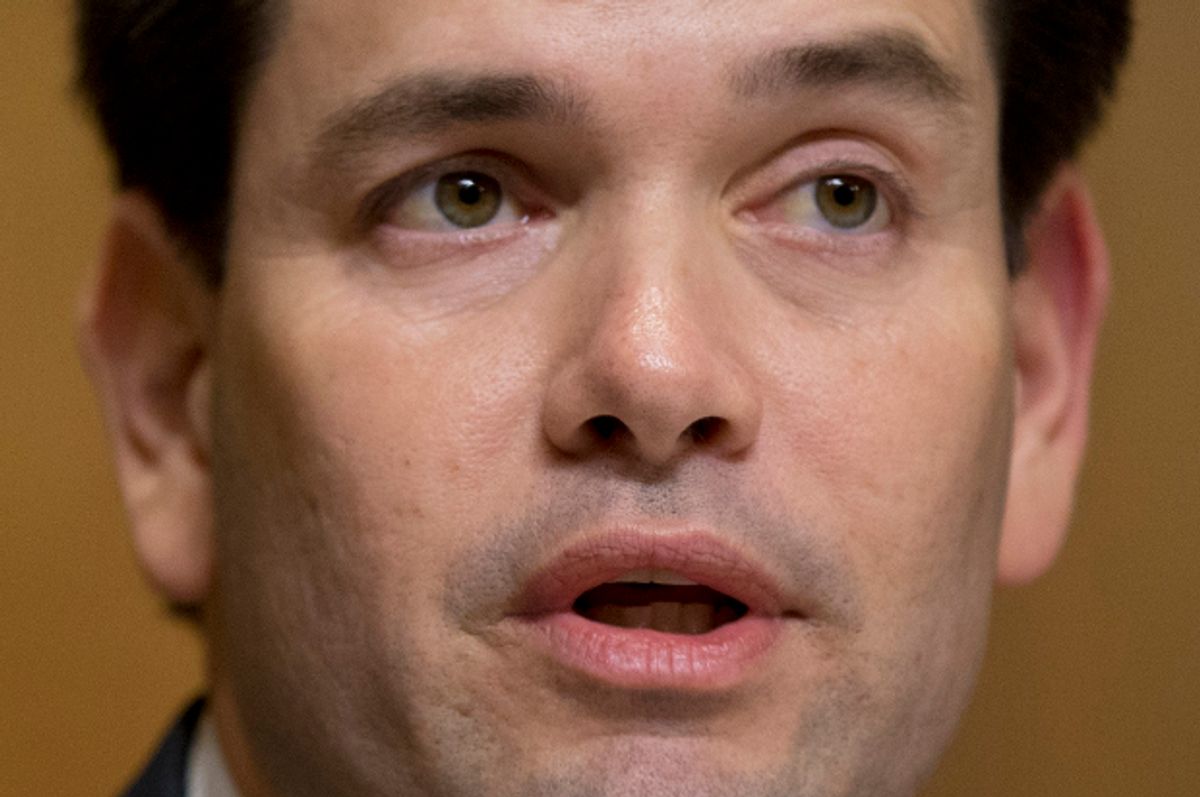 Once again I find myself amazed that one 2016 GOP hopeful is getting raked over the coals for inconsistency on the Iraq war, while another is being celebrated as a foreign policy maestro while demonstrating just as much confusion and dishonesty about the disastrous conflict.

I’m referring, respectively, to Jeb Bush and Marco Rubio. After three tries, Jeb finally came around to the position that he, knowing what we know now about the Iraq intelligence, would not have made the decision to invade. This new position puts him in line with much of the rest of the 2016 Republican field, including Rubio, who said after his big foreign policy speech earlier this week that “not only would I not have been in favor of it, but President George W. Bush would not have.” The notion that Bush would have stayed his hand in the face of dubious intelligence is a hot sack of nonsense, and Rubio has previously said many times before that the Iraq war was completely worth it.

So what does Rubio actually think? It’s tough to say, and he’s working hard to muddle his position even further. As Buzzfeed’s Andrew Kaczynski notes today, Rubio went on the radio in New Hampshire and tried to “elaborate” on his opinion that neither he nor George W. Bush would have invaded Iraq with the benefit of hindsight:

RUBIO: Well, there’s two separate questions involved in that. The first is if – what I was asked yesterday by Charlie Rose – was if you knew there weren’t weapons of mass destruction, would you have gone forward. And the answer is no one would have. We still would have had to deal with Saddam Hussein, but obviously would have done so differently.

Again, this is fiction. The Iraq invasion wasn’t just about WMD. It was about Saddam’s alleged links to Al Qaeda and toppling a repressive dictator and spreading freedom and democracy – all the neoconservative arguments that Rubio proudly endorsed in laying out his foreign policy doctrine.

But Rubio kept talking, and things just kept getting messier and less coherent:

RUBIO: The president has to act on what he is told at the time, and all the leading intelligence agencies – and foreign intelligence agencies – were telling President Bush at the time that Iraq had weapons of mass destruction. And they had a long history of producing them, of gassing their own people. And so it was not a mistake in the sense that the president made the right decision based on what he believed and had reason to believe at that time.

The act of going to war based on intelligence that was wrong is "not a mistake" if you earnestly believe it to be accurate? Well, that’s certainly an interesting statement for a would-be commander-in-chief to make. Okay, so Rubio argues that the Iraq invasion wasn’t a mistake, but he also says he would not have done it had the intelligence on WMDs been correct. Except…

RUBIO: The fact of the matter is that the world is a better place because Saddam Hussein is not around.

So with hindsight Rubio wouldn’t have invaded based on the WMD intelligence, but also with hindsight the invasion was still worthwhile irrespective of the WMD issue because Saddam Hussein was a bad man. But let’s get to the nub of the matter: had Rubio been in Bush’s place and had he been confronted with the same bad intelligence without the benefit of hindsight, would he have ordered the invasion?

RUBIO: Absolutely. If you believed that Iraq had weapons of mass destruction that they could have passed on to terrorists, that they could have used to massacre their people and used to start a regional arms race, you absolutely have to do that and you have to – the president’s not an intelligence officer, they have to rely on the information provided to them.

So, to sum up: Rubio absolutely would have invaded Iraq, only he wouldn’t have if the WMD intelligence had been right, only he probably would have because doing so made the word a better place. And even though the intelligence was mistaken, acting on mistaken intelligence isn’t a mistake if you believe it’s true, so… The Aristocrats!

Also, Rubio just stated outright that if a country possesses weapons of mass destruction and there’s a concern they could pass them on to terrorists or start an arms race, then you’re obligated to launch an invasion or some other attack to stop it. Funnily enough, those are the exact same concerns Rubio hammers away on when talking about Iran and its nuclear ambitions. So it sure seems like President Rubio is ready for another military adventure in the Middle East. The good news for him is that by his own ridiculous and tortured logic about war and the presidency, there’s zero chance he’ll have made a “mistake.”