"Sheriff Joe" has terrorized the citizens of Maricopa County, AZ, for years — but maybe not for much longer.... 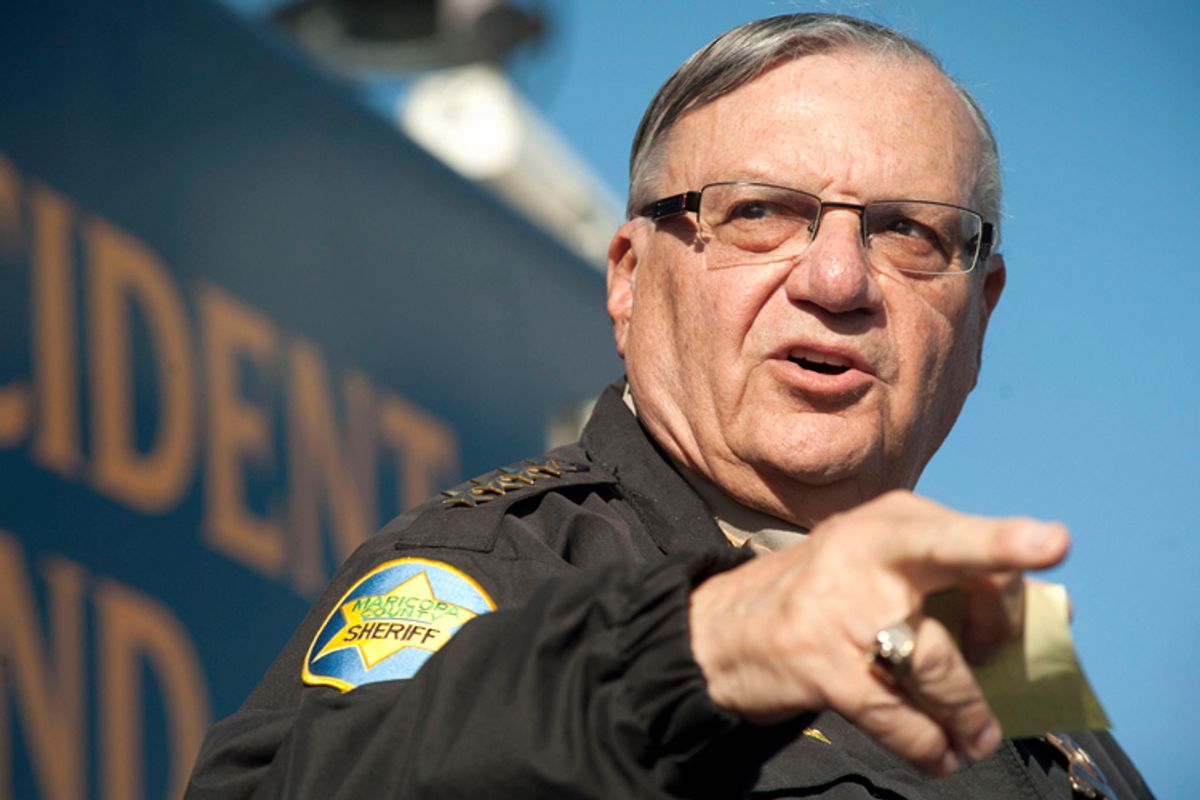 Sheriff Joe Arpaio is in trouble.

Arpaio has reigned as Maricopa County’s highest law enforcement officer for more than 20 years. During that time, his policies -- housing prisoners in tents, serving rotten food in jail, making inmates wear pink underwear, etc. -- have gained international notoriety. He also attracted attention for conducting sweeps of undocumented immigrants, which drew charges of racial profiling from the Department of Justice. Arpaio’s actions have been criticized by Amnesty International, the ACLU and the New York Times editorial board, which billed him as “America’s Worst Sheriff.”

In recent years, Arpaio used his connections in Arizona to go after political enemies. Investigations targeted political opponents, mayors, journalists, judges, and even members of the Maricopa County Board of Supervisors. In one particularly disturbing case, Arpaio had Michael Lacey and Jim Larkin, founders of The Phoenix New Times, arrested for publishing a column that revealed Arpaio’s address. They were hauled out of their homes in the middle of the night by MCSO officers and briefly jailed; the charges against them were dropped the next day and the county eventually settled a lawsuit, brought by Lacey and Larkin, for $3.75 million, according The Arizona Republic.

A 2010 report from the county’s Office of Budget and Management, also revealed the MCSO had misspent as much as $80 million in funds meant for jail operations over a five-year period.

It gets weirder: In 2011, Arpaio dispatched investigators to Hawaii to investigate President Barack Obama’s allegedly fraudulent birth certificate. Even though Arpaio held a press conference to declare the document a forgery, Arizona Gov. Jan Brewer, Arizona Sec. of State Ken Bennett and several Hawaiian officials all dismissed the allegations. However, in spite of Arpaio’s abuses, witch hunts and financial mismanagement, he has been elected six times and survived two recalls.

Each time controversy has embroiled Arpaio, he has still managed to maintain a stranglehold on the Sheriff's Office. But his problems now seem to be coming to a head. In 2013, a federal judge ruled against Arpaio in a civil-rights complaint filed by Latinos in the county who alleged that they had been disproportionately targeted by the Sheriff's Office. The federal judge who oversaw the case, G. Murray Snow, has been holding hearings this month to determine if Arpaio has instituted reforms mandated by the court. Things have not gone especially well for Arpaio in these hearings, as evinced by thefollowing summary of testimony taken yesterday in court:

Montgomery made a name for himself as an alleged con artist after he convinced the CIA that he was able to decode secret al-Qaida messages shortly after the 9/11 attacks.

Arpaio confirmed his office's transactions with Montgomery in a bombshell contempt of court hearing last month, but provided few and vague details about the scope of Montgomery's work.

Even more damning, however, was the revelation several weeks ago that Arpaio had launched an effort to discredit Judge Snow himself. According to Fox News Latino:

Snow said documents handed over by Arpaio's office showed the police agency had aimed to track any calls between the court and Justice Department officials. Snow also said the documents suggest Arpaio's office believed someone had undermined the process for selecting a judge for the profiling case, even though judges are randomly selected.

"The very existence of these documents in MCSO's files causes me concerns," Snow said, calling the theory being pursued by the sheriff's office "bogus."

While hearings are ongoing, it is not too soon to wonder what happens to Arpaio once they conclude. "Sheriff Joe" once enjoyed towering popularity in Maricopa County: Back in 2000, Arpaio received a commanding 66 percent of the vote. But in his last election, in 2012, he received a little over 50 percent of the vote. Arpaio is running for reelection in 2016, and there are signs that voters may have tired of his antics. A PPP poll released earlier this month showed that only 38 percent of Maricopa County residents had a favorable impression of Arpaio, compared to 53 percent of residents who had a negative impression.

So is the tide finally turning? Amongst in-county experts, opinions differ.

Mary Westheimer, who has lived in Phoenix, Ariz. for more than 30 years, said Arpaio has used sharp fundraising, charm and fear to stay in power. He is media savvy and has turned some of his stunts into money-making ventures, such as selling branded pink underwear and pink handcuffs. He has already amassed more than $5 million in his campaign war chest.

“Voters keep reelecting him,” said Westheimer, who campaigned for Arpaio’s opponent Paul Penzone in the last election, “because he is very wily, and a master of public relations."While Westheimer has never personally met Arpaio, his reputation, for charming voters and ruthlessly targeting his opponents, spans far and wide.

“Arpaio has gone after judges, supervisors and reporters who he felt crossed him," Westheimer said. "Even many of those who came out on top legally fought for years and spent lots of money to clear their names. We, the taxpayers, ended up paying many of them huge sums, of course."

"If I start having problems after this article is published, we will all know why."

Arpaio has been in office since 1992, but Westheimer thinks next year’s election might be a chance for voters to finally get rid of him.

“The chances of him being voted out of office in 2016 are better than they have ever been,” Westheimer said. “Last election, he won by the thinnest margin yet, and now that his abuses are being aired. At this point, I believe he is vulnerable.”

However Bert Martinez, a Mesa, Ariz.-based political marketing expert, disagrees says the 82-year-old Arpaio is viewed as a hero by many local residents.

“Maricopa County has a large aging population,” Martinez said. “Sheriff Joe is seen as energetic and healthy, an example that senior citizens can lead active and productive lives.”

“[Arpaio] is perceived to be tough on crime; he publicly punishes and humiliates inmates. He's also perceived as an everyday working class stiff, fighting bureaucratic red tape. The us vs. them mentality works in his favor,” he said.

Martinez doubts if Arpaio will be ousted next year.

“The only way that Joe Arpaio will be voted out is if there’s a new sheriff that's more charismatic and can bring something new to the table,” he said.

“I have called for Sheriff Joe Arpaio to resign for the last five years,” Gallardo said. “I think he has done more harm to the state of Arizona than any other elected official in recent history.”

According to Gallardo, Arpaio has used his power to falsely arrest his political enemies, including elected officials. However, the taxpayer ends up paying for Arpaio's crimes.

“Unfortunately the taxpayer has to pay the bill,” said Gallardo, who pointed out money for settlements comes out of the general fund, not the MCSO budget.

He also cited a case where the MCSO had failed to investigate 400 sex crimes against children. Gallardo said the county recently settled a case with one of the victims for $3.5 million.

“[Arpaio] has made a mockery out of this law enforcement agency,” Gallardo said.  “He has become an enemy of the public. I believe it’s time for Sheriff Joe to resign.”