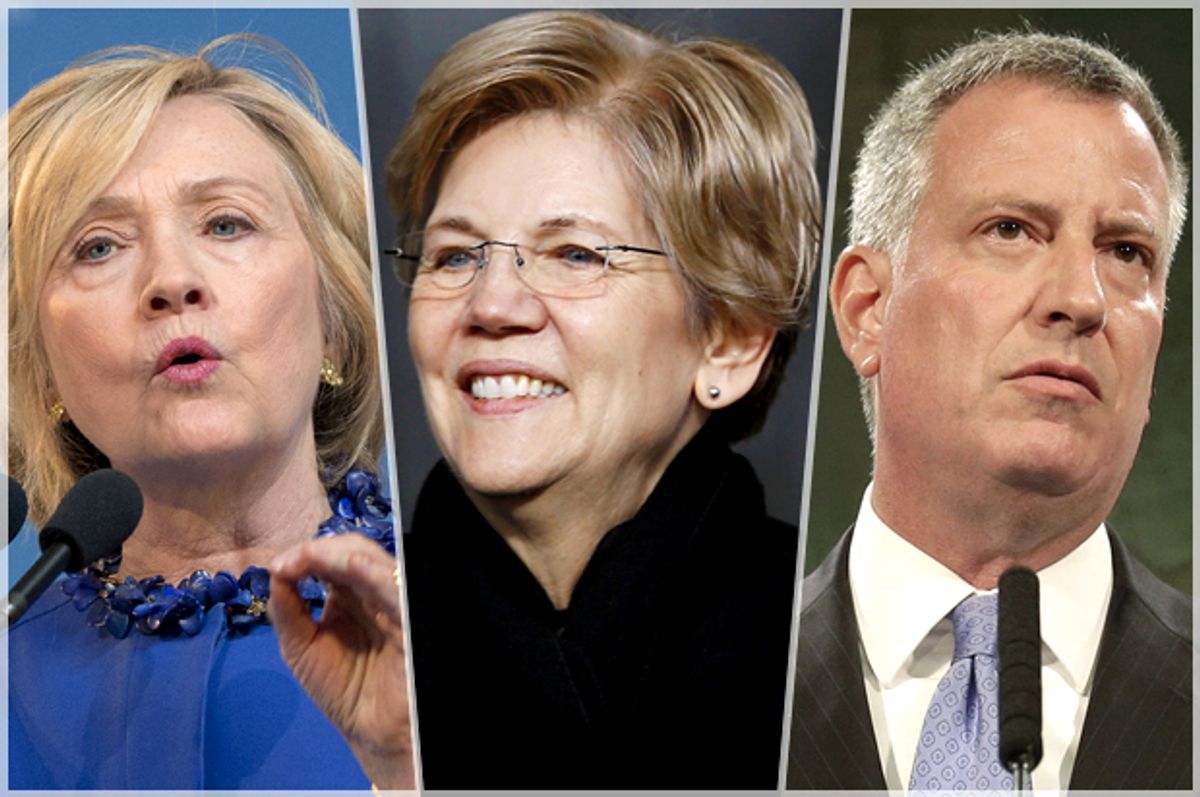 Earlier this week, New York City Mayor Bill de Blasio, along with a gaggle of bored reporters and some boldfaced names in the progressive movement, unveiled a “Progressive Agenda to Combat Income Inequality.” Much like the media event that accompanied its unveiling, the agenda is supposed to be understood as a kind of 21st-century, liberal version of the storied “Contract with America,” the PR stunt that, as legend (erroneously) has it, rocketed Newt Gingrich and the Republican Party to power after the 1994 midterm elections. As my colleague Joan Walsh reported on Thursday, this backward-looking attempt to lay out a forward-looking platform for the Democratic Party did not go entirely according to plan.

Which is not to say it was a failure. In fact, for a photo-op held during a non-election year in May and headlined by a relatively unknown local politician, the unveiling of the agenda probably got more attention than it deserved. Even so, as Joan relayed from the scene, there was some tension at the event — and not only because President Obama’s hard sell of the Trans-Pacific Partnership (TPP) is driving some liberals to distraction while making others defensive. Sure, the agenda does call on lawmakers to “[o]ppose trade deals that hand more power to corporations at the expense of American jobs, workers’ rights, and the environment,” which is basically how the TPP is described by its foes. But that discord was for the most part kept under the surface.

The real reason de Blasio’s stab at playing the role of Progressive Moses was a bit awkward (despite going much better for him than it did for Ed Miliband) is knottier and harder to ignore. And it didn’t only trip up Hizzoner, but also marred a same-day Roosevelt Institute event on “rewriting the rules” of the economy, which was keynoted by no less a figure than Sen. Elizabeth Warren. It’s an issue that’s long dogged the American left, and the United States more generally, and it’s one that will not go away, no matter how fervently everyone may wish. It is, of course, the issue of race; and as these D.C. left-wing confabs showed, it will dash any hope of a liberal future unless the “professional left” gets deathly serious about it — and quick.

If you haven’t read Joan’s piece (which you really should), here’s a quick summary of how race wound up exposing the fault lines of the left at two events that were supposed to be about unity of purpose. Despite American politics becoming increasingly concentrated over the past two years on issues of mass incarceration and police brutality — which both have much to do with the legacy of white supremacy and the politics of race — neither de Blasio’s agenda nor the Roosevelt Institute’s report spend much time on reforming criminal justice. To their credit, folks from both camps have agreed that this was a mistake and have promised to redress it in the future. Still, it was quite an oversight — and a shame, too, because it justifiably distracted from an agenda and a report that were both chock-full of good ideas.

I wasn’t in the room when de Blasio’s agenda or the Roosevelt Institute’s report were created, but I feel quite confident in saying that the mistake here was not a result of prejudice or thoughtlessness or even conscious timidity. I suspect instead that ingrained habits and knee-jerk reflexes — born from coming of age, at least politically, in the Reagan era — are more likely to blame. Because while the radical left has been talking about and organizing around racial injustices for decades, mainstream American liberalism, the kind of liberalism that is comfortably within the Democratic Party mainstream, is much less familiar with explicitly integrating race into its broader vision.

Let me try to put some meat on those bones with a concrete example also taken from earlier in the week. On Tuesday, President Obama joined the Washington Post’s E. J. Dionne, the American Enterprise Institute’s Arthur Brooks, and Harvard’s Robert Putnam at Georgetown University for a public conversation about poverty. And while you’d expect race to come up — what with the African-American poverty rate being nearly three times that of whites, the African-American unemployment rate being more than two times that of whites, and the African-American median household income being barely more than half that of whites — you would be incorrect. As the Atlantic’s Ta-Nehisi Coates noted in response to this strange conversation, “the word ‘racism’ does not appear in the transcript once.”

Again, it strikes me as unlikely that simple bigotry is the reason. A more probable explanation is that mainstream American liberals like Obama and Dionne (Brooks is a conservative and Putnam is not explicitly political) have become so used to tiptoeing around white Americans’ racial anxieties that they cannot stop without a conscious effort. For the past 30-plus years, mainstream liberalism has tried to address racial injustice by focusing on the related but distinct phenomenon of economic injustice. The strategy, as Coates puts it, has been to “talk about class and hope no one notices” the elephant in the room, which is race. And for much of that time, one could at least make a case that the strategy worked.

But as I’ve been hammering on lately in pieces about Hillary Clinton, the ’90s are over. What made political sense in 1996 doesn’t make nearly as much sense today. Like the Democratic Party coalition, the country is not as white as it used to be. And the young Americans whose backing liberals will need to push the Democrats and the country to the left are the primary reason. If it was always true that the progressive movement could not afford to take the support of non-white Americans for granted, it’s exponentially more true now, when the energy and vitality of the progressive movement is so overwhelmingly the product of social movements — like the Fight for $15 or #BlackLivesMatter — driven by people of color.

As Hillary Clinton seems to understand, a key component of smart politics is to meet your voters and your activists where they are, rather than where history or the conventional wisdom tells you they should be. For the broader progressive movement, that means shaking off the learned habits of the recent past — and, more specifically, overcoming the fear that talking forthrightly about unavoidably racial problems, like mass incarceration, will scare away too many white voters to win. Economic and racial injustice have always been seamlessly interconnected in America; but as leading progressives learned this week, the time when liberals could talk about class but whisper about race is coming to an end.