A mother is suing after she and her daughter are kicked off their flight home. It could have just as easily been me 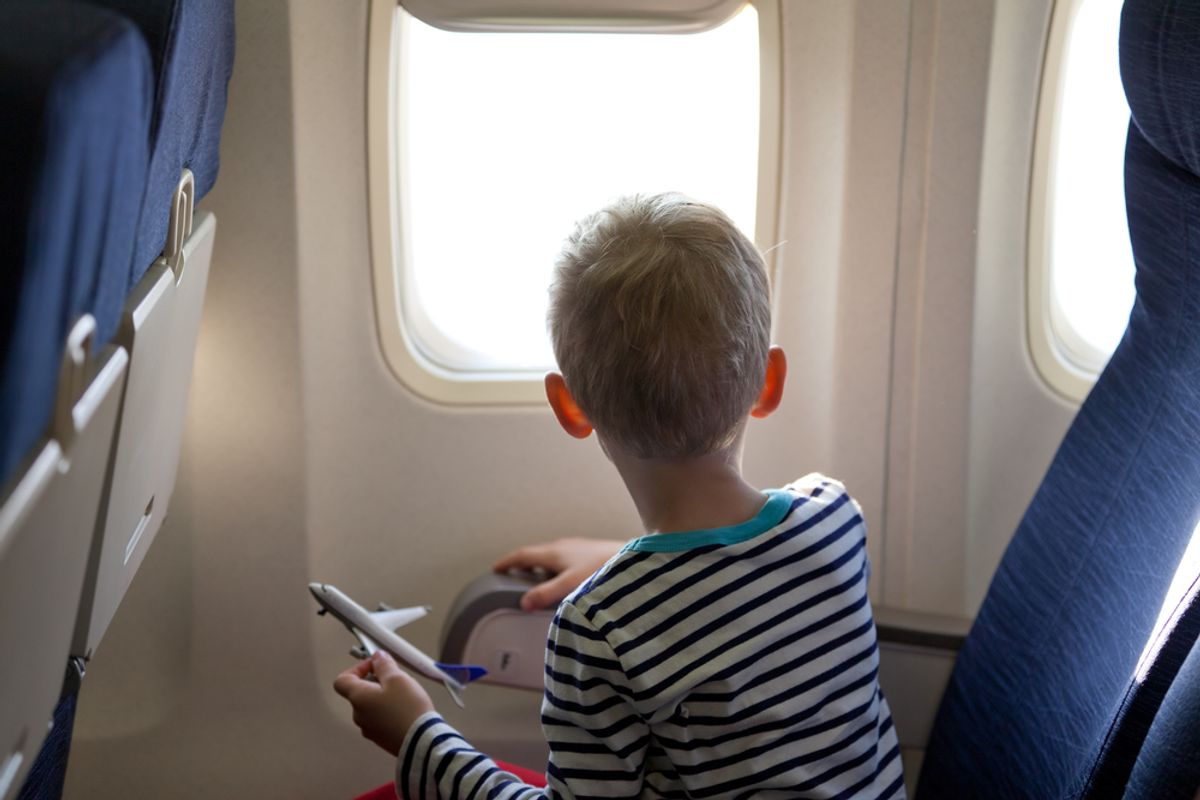 In many ways my son Finn is like any other mischievous and energetic 7-year-old boy. He loves to run and jump, and to roughhouse with his dad. He enjoys games on his iPad and is always up for a deep cuddle in the morning. But sometimes when Finn runs, he runs into traffic. He also can’t talk, has limited abilities to understand and follow directions (like don’t run into traffic). Furthermore, and most crucially for this conversation, he has a hard time managing frustration. A very hard time. If you try to move him out of one of his “preferred activities”—say you suddenly take away that iPad, or insist he get out of the bath before he’s ready—he might transform into a whirling tangle of kicking limbs, of pinching and scratching fingers, of jaws eager to bite. Finn is not a bad kid. Finn is on the autism spectrum and he is simply unable to regulate his moods. Such storms, regular but often brief, are part of our daily life as Finn’s parents. And while we luxuriate in his soft skin and tight embraces these storms must be anticipated and avoided.

Which is why the story of the Beegle family was such an upsetting read for me. In case you missed it, Donna Beegle was flying home to Oregon from Disney World with her husband and her 15-year-old autistic daughter, when her family was forced off a United Airlines plane because of her daughter’s behavior. According to press reports, and the mother’s Facebook post, the trouble started with a request for hot food. The daughter hadn’t eaten before boarding the plane and wouldn’t eat any of the cold snacks her mother had packed. The mother knew her daughter would need to eat or she’d become unruly, so she requested hot food from a flight attendant. She was repeatedly told that none was available to her in Economy. She knew hot food was being served in First Class so Beegle asked if she could buy a hot meal and was again told no. Finally Beegle said, with her daughter now crying, “after she has a meltdown and tries to scratch in frustration, will you help her then?” The First Class attendant reappeared with hot jambalaya. Her daughter ate and quietly settled into a screening of Pocahontas on her iPad. A short while later the plane made an emergency landing in Salt Lake City and the family was kicked off the plane. Donna Beegle has vowed to sue United Airlines and the airline has released a statement saying its "crew made the best decision for the safety and comfort of all of our customers and elected to divert to Salt Lake City after the situation became disruptive."

More from DAME: "Why Is Michael Eric Dyson Whining While Baltimore Is Burning?"

Was the safety and comfort of United passengers truly being threatened? Their safety wasn't. But their comfort may have been momentarily compromised when the daughter became upset. Consider for a moment: Was her behavior any worse than that of the child who won’t stop kicking the seat? Or the baby that screams throughout a four-hour flight? Or the rowdy footballers who sing loudly after a few too many mini bottles of Jim Beam? When Beegle warned flight attendants that her daughter couldstart to scratch if she didn’t eat, she wasn’t making a threat. She was asking for compassion and help. Instead she was given the boot.

Such a story is every special-needs parent’s worst nightmare. Even today, when one in 88 kids are diagnosed with autism, very little is understood about the disability, which is often “hidden” to the casual observer. See a kid in a wheelchair and you understand that person’s limitations and act accordingly. See a kid freaking out while standing in line at the market and you think that kid is out of control—what’s wrong with his mom?

More from DAME: "When Will We Stop Exploiting Home-Care Workers?"

Even parents of high-functioning autistic children face ordeals when traveling. Meredith, an entrepreneur based in Massachusetts, recalls a short flight with her 7-year-old autistic son some years ago. “The flight attendants did a little ‘teaser’ about the snacks that would be offered later in the flight, displaying the shiny cookie packets and then stowing them away,” she told me. When Meredith had exhausted her bag of snacks, her son asked when the snacks the flight attendants showed would be available. Then they walked by, and started handing out the snacks at the rear of the plane. “By then, Raleigh was getting pretty frustrated and disregulated. He reached for the flight attendant as she walked by and raised his voice, "Where is my snack? Why can't I have my snack?” Meredith kept him occupied until he got his snack 15 minutes later. While he was busy eating it and watching a DVD, Meredith took the opportunity to go to the bathroom. As she waited in line near the galley, she overheard two flight attendants talking. “One said to the other, 'Can you believe that kid? What a spoiled brat! He should be taught some manners!!'"

The sense of isolation known by parents raising kids with autism is keen. Few relate with your day-to-day experience—the months-long wait for the dental appointment where your son can be sedated so his cavities can be treated, the need to watch him like a hawk at the playground so he doesn’t stuff his nose with sand. And you don’t want to disrupt other people’s “good time,” nor deal with others' judging and sometimes lashing out, so you have limited options for where you can go and relax. Outings to the museum on a rainy day may simply not be a possibility unless it’s on designated “autism days” when screeching and running around is tolerated. To really enjoy a friend’s invitation to a BBQ requires that either you or your partner stays home with your autistic child. Nights out at a restaurant are a gamble. There’s only one restaurant where my family can reliably go out with ease because the staff knows our son and lets him walk around while we wait for our food. If we want to enjoy a vacation with our neurotypical daughter, my family usually has to split up. Last Thanksgiving, I took my daughter to see her cousins in Wisconsin while my husband hosted friends at home with our son. Either that or we pay large sums of money (and units of guilt) so our sitter can watch our son while we experience travel without him, like any “normal family” does.

More from DAME: "The "Fetal Pain" Bill Is Back, and It's Worse Than Ever"

My in-laws live outside Portland, Oregon. They used to visit us in Boston but they are getting on in age and suffering health issues. We were planning to fly the family—the whole family—west this summer, crossing our fingers that it would work out. But now that I’ve read about what happened to the Beegle family—and I have this thing about being treated like a pariah (I hate it)—I’m less inclined to try, which will again mean another vacation spent apart.

United Airlines has an area on their website devoted to preparing for passengers with disabilities but nothing there specifically addresses passengers who are on the spectrum. A number of airports, through Wings for Autism, offer “mock boarding” for kids who may be anxious about walking through security lines. This could help with some kids, but not all. The defining characteristic of kids on the spectrum is the inability to predict their behavior. Autism is unique among disabilities in that the presentation of the disability is so completely variable. Some people diagnosed with autism spectrum disorder (ASD) are highly functioning but obsessive and/or socially awkward. Others react badly to sudden loud noises and touch. Others, like my son, love to be touched but can’t abide long lines and frustration. The only way to accommodate and anticipate the needs of such passengers is with patience and compassion.

Beegle has threatened to sue United Airlines, not, she says, for the money but to insure that staff is trained so that no other family has to endure the humiliation and inconvenience that hers endured. “We simply don’t want people treated that way. Treat people with dignity. Treat people with respect. Help if you can. That’s all I want,” Beegle told reporters. For United Airlines to create such a hostile family environment in what we were once known as the “friendly skies” is to discriminate against those very families that are most desperate to know the sorts of diversions enjoyed by other families: a trip to see the grandparents, a trip to Disney World.

Perhaps most shocking to me following Beegle’s story was reading the many hostile comments on her Facebook post. “Seriously? Do you read the terms and agreements for the airlines? Yes, it sucks that your special little snowflake couldn't be treated different than every other person on the plane but if she's liable to have an episode you shouldn't be taking her on a flight in the first place. Flying is a luxury not a god given right.” My hope is that the media attention spurred by Beegle’s story will open people’s eyes and also their hearts to the reality of raising kids with autism.