The crew of the Arctic Sunrise were determined to prevent oil drilling in the Arctic. Their story begins 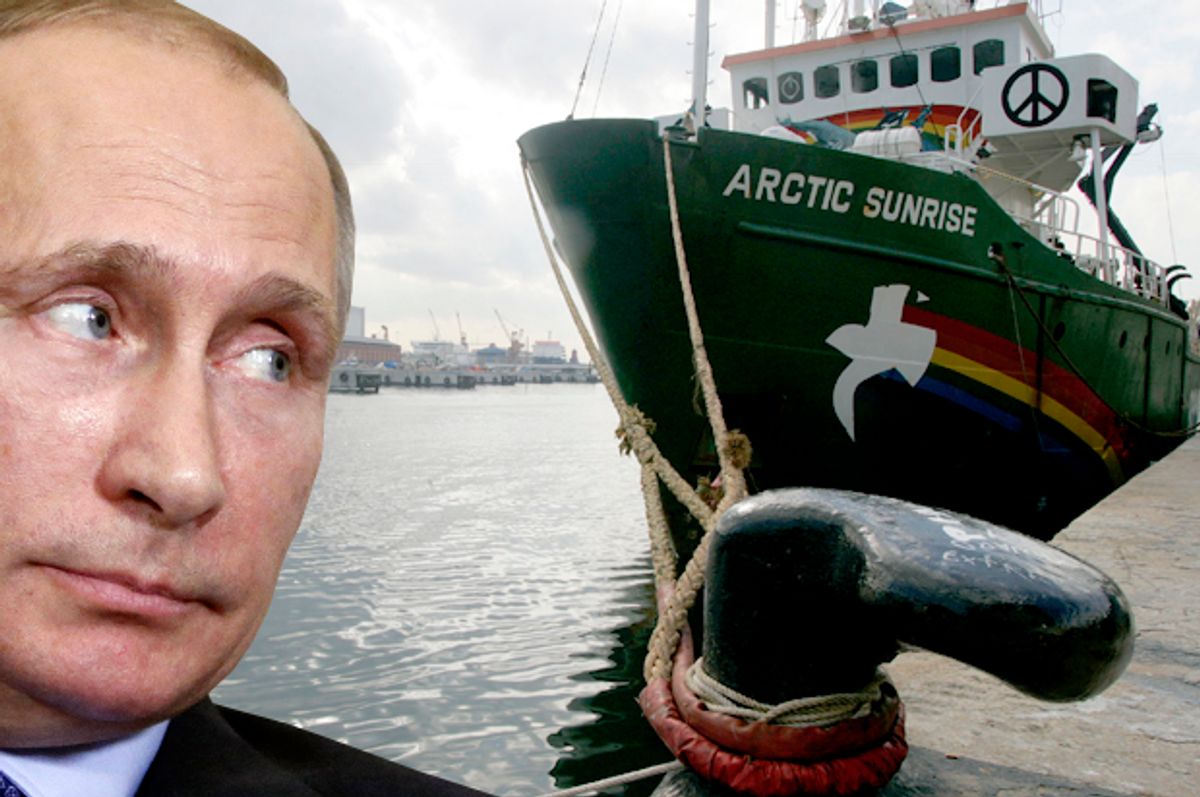 He lifts the binoculars, narrows his eyes and twists the dial to focus. His vision is flooded with blurry scarlet red. Frank turns the dial again and the view sharpens. He can see large white Russian letters, a helicopter deck protruding far over the water, the drilling tower standing out crisply against a blue sky.

He must have stared at that oil platform fifty times in the last twelve hours. It looks like a football stadium floating defiantly in the ocean, 180 miles north of the Arctic Circle. A half-million-tonne square block of metal and concrete with sheer red sides.  It’s called the Prirazlomnaya.

Frank is standing at the bow of the Greenpeace ship Arctic Sunrise. Three miles of ocean separate him from the platform. He turns his head and the view through the binoculars fills with sweeping open water then the dark blue hull of another ship. It’s a Russian coastguard  vessel – the Ladoga – and it’s slowly circling the platform, protecting it from protesters. Specifically from Frank Hewetson and his friends.

He sucks his teeth and lowers the binoculars. It won’t be long now. Soon he’ll know if his plan is good enough. Earlier today he launched a flotilla of RHIBs – inflatable speedboats – from the Arctic Sunrise. It was a dummy run to test the Russians’  reaction time. The coastguard took five minutes, maybe six, to launch their own boats. Frank watched them from the deck of the Sunrise. They were slower than his team. Slower than the Greenpeace crew.

There are two RHIBs on the Russian ship. Tomorrow morning he’ll  launch five from the Sunrise. He’s  got them beaten for numbers, but he’ll need to surprise them too.

He  lifts the  binoculars and surveys the  steel skeleton beneath the helicopter deck. That’s  where he needs to get the lines up. The team practised for days in a Norwegian fjord before they set sail. They constructed a fake helideck and attached it to the crow’s nest of the Arctic Sunrise then bobbed in boats for hour after hour, firing ropes over it with catapults. After four days they were looping lines over the target nearly every time. But tomorrow morning they’ll have to hit piping forty metres above their heads, with the Russian coastguard barrelling down on them in speedboats.

He turns the binoculars back to the Ladoga and blinks at a glint of brilliant reflected sunlight. He squints. Nearly three miles away a man in a blue blazer and peaked cap is standing at an open door, holding his own binoculars, watching him.

Frank Hewetson has been sailing with Greenpeace for two decades. He’s been banned from the United States for crimes of moral turpitude, he’s broken into seven polluting power stations in four countries, and he once blocked the take-off of a British Airways jetliner at Heathrow airport in a protest against climate change. Three years ago he was skewered by a grappling hook thrown by a French sailor while he was protesting against illegal bluefin tuna fishing. The hook passed cleanly through his left leg, then the Frenchman pulled on the rope, dragging Frank along the floor of a boat. Frank had to cut the rope with a knife to stop himself becoming the fisherman’s latest illegal catch.

After twenty years leading direct action teams across the globe, he is the go-to guy if you want to scale an enormous piece of machinery being operated by a powerful company with a multi-million-dollar security operation. His colleagues call him ‘The Colonel’ – a nod to the confident cut-glass way he delivers orders, and because he chairs meetings wearing a World War Two tank driver’s uniform.

He turns around and leans back against the railing. The bow of the Arctic Sunrise is dipping and rising gently. Frank lifts his baseball cap and rubs a hand over his scalp then he looks up at the bridge and sees three faces behind a broad wall of glass. One of them – a middle-aged man in a cream and blue sweater – has a pair of binoculars pressed against circular steel-rimmed spectacles. He has short black hair and a beard that’s greying at the chin. His name is Dima Litvinov. His lips are moving but Frank can’t hear what he’s saying. If he could, he would hear an accent that sounds American but with a trace of something else. Dima is fifty-one years old, he was born in Russia and grew up in Siberia, where his family was exiled after his father challenged the Soviet regime. When he was twelve years old the Litvinovs were expelled from Russia and moved to New York.

Dima passes the binoculars to a young woman who lifts them to her face. She is Sini Saarela, an activist from Finland, thirty-one years old with a climber’s lean physique, a bob of blonde hair with a centre parting and sharp blue eyes. Last summer she climbed the side of that oil platform – the one she’s looking at now. She spent hours hanging from the Prirazlomnaya as she was blasted with freezing seawater fired from a cannon. The cold eventually forced her down, but a year has passed and now she’s back for more.

Tomorrow morning her job will be to scale the platform again. She’ll rig a pulley system, then the Greenpeace crew will lift a one-tonne, barrel-shaped survival  pod equipped with state-of-the-art communications systems thirty metres above the water. There it will house three activists for as long as possible – days, maybe weeks – stopping the Prirazlomnaya from operating. That’s the plan. But it will only work if Sini and her friends can reach the platform before the Russian authorities deploy their own RHIBs from the coastguard ship. They’re in international waters, technically the Russians can’t arrest them; last year they did nothing more than watch as Sini was drenched with Arctic water. But this time it feels different. The  coastguard started tailing the  Greenpeace crew a few hours after they sailed from Norway towards the platform. The Russians’ radio messages were aggressive and uncompromising.

Sini passes the binoculars to a man dressed in a white T-shirt and shorts. He’s thickset with a handsome face and tanned skin. Pete Willcox is the 61-year-old American captain of the Arctic Sunrise. In three decades on Greenpeace ships he’s tangled with commandos and coastguard  officers more times than he cares to remember. He’s sailed into nuclear test zones, swum in front of a US Navy destroyer and confronted Japanese whalers.

Frank  first met  him  in  1991  when they  plugged an outflow pipe at an Australian port where a mining company was pumping toxic effluent into the harbour. By then Pete Willcox was already a Greenpeace legend. Six years earlier he’d been the captain of the Rainbow Warrior when she was moored up in Auckland harbour, New Zealand. Pete was about to lead an expedition to protest against the French government’s plan to  detonate a nuclear weapon on  the Pacific island of Moruroa. Just before midnight a limpet mine attached to the hull of his ship exploded. It had been laid by agents of the French secret service.

The blast shook Pete awake. He thought his ship had been hit by another boat and he started racing through the Warrior checking on the crew, getting everyone out on deck. His friend, the Portuguese-born photographer Fernando Pereira, initially came outside but returned to his cabin to save his cameras. Minutes after the first blast, a second mine detonated. Fernando, a father of two young children, was drowned.

Twenty-eight years later Pete Willcox is leading another expedition, and another nation’s security forces are deter- mined to stop him. Before leaving Norway three days ago he sent his new wife a postcard. ‘If the Russians keep their sense of humour,’ he wrote, ‘I think this is going to be a fun action.’

Frank has known Pete Willcox and Dima Litvinov for most of his quarter century as a Greenpeace activist. But he met most of the Sunrise crew for the first time when they arrived in  Norway last week. He  watched them  walking along the dockside with their bags slung over their shoulders – climbers, sailors and campaigners from eighteen different countries. The  oldest was the  captain, the  youngest was Camila Speziale, a 21-year-old Argentine climber who quit her job as a receptionist to occupy a pod hanging from the helicopter deck of a Russian Arctic oil platform.

The Sunrise is fifty metres long, an icebreaker painted green with a riot of rainbow colours at the bow. When she sailed into that Norwegian fjord for four days of training, this was a ship of strangers. Now they’re a tight crew. They spent the days firing catapults, climbing ropes, rigging the pulley system, lifting the pod. In the evenings they shared stories in the lounge. One night the ship’s intercom exploded with two words.

The crew ran out on deck and craned their necks. They draped their arms around each other’s shoulders as a flag of transparent green fabric flapped slowly in the sky above their heads from one horizon to the other. The next morning they docked in the Norwegian port of Kirkenes. Then they sailed for the Prirazlomnaya.

Frank turns around and grips the railing. Across the water is the most controversial oil rig in the world. It’s owned and operated by Gazprom, Russia’s  state-owned energy giant. Sometime in the next few weeks Gazprom will try to become the first company in history to pump oil from the icy waters of the Arctic. Until now the thick sea ice has made drilling here almost impossible, but as temperatures rise the oil companies are moving north, and if the Prirazlomnaya succeeds it will spark a new Arctic oil rush. That’s why the Sunrise is here. That’s why, right now, across this ship, thirty men and women are making final preparations to scale that platform and shut it down.

Frank leans over the bow and sees his reflection in the water. He breathes deeply and looks up. The last of the sun is sinking below the horizon. When it next appears, he’ll give the order to go.

Excerpted from "Don’t Trust Don’t Fear Don’t Beg: The Extraordinary Story of the Arctic 30" by Ben Stewart. Published by The New Press. Copyright © 2015 by Ben Stewart.  Reprinted here with permission.