The Shakers -- the ones who made furniture and hated sex -- were not only ahead of their time on women's rights, they were ahead of ours, too

The Shakers believed in one unassailable truth: That equality of the sexes is a human right 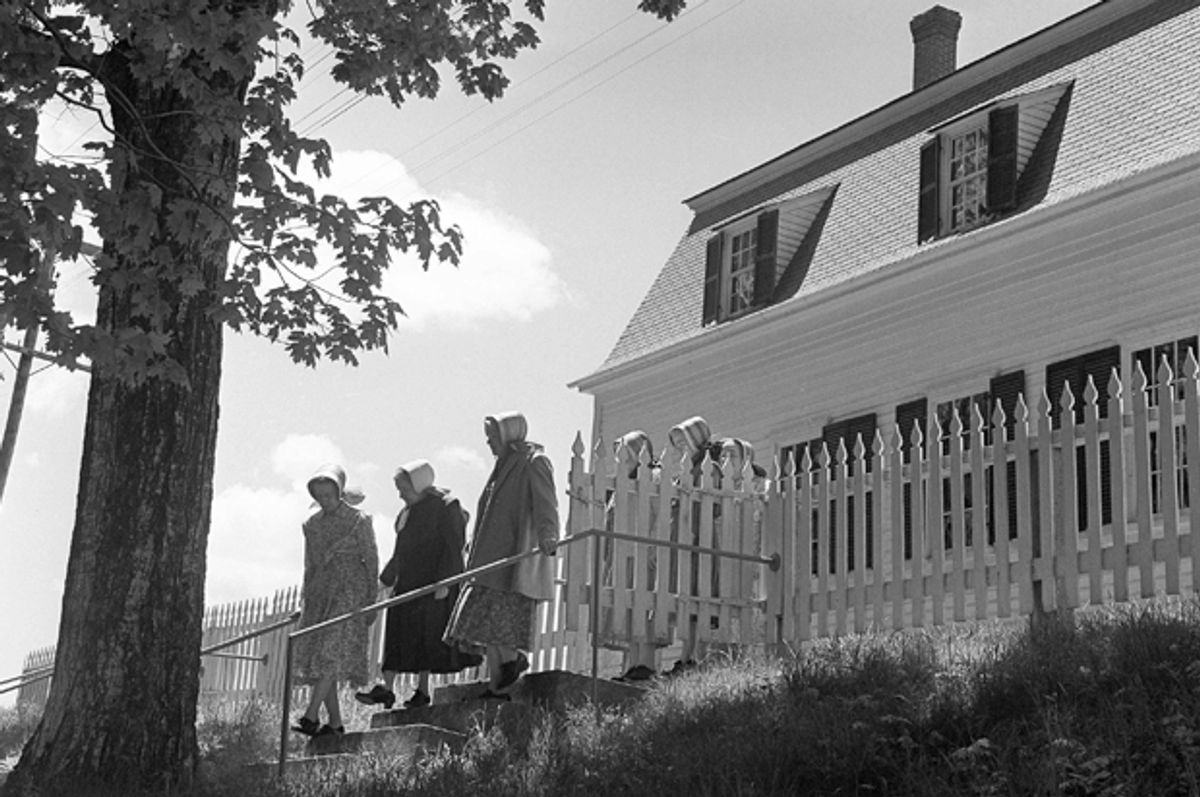 Most of us have read the stats—that 25 percent of women on American college campuses report surviving rape or attempted rape; that it will take 75 years for all American women to receive equal pay for equal work; that the U.S. ranks 98th worldwide in the percentage of national legislative seats held by women. Very few of us have done so, however, and thought of the Shakers. Yes, those Shakers — the ones who made furniture and hated sex.

On the practical side, in late 18th and early 19th century New England, Shaker settlements were well known for sheltering victims of abuse. Then as now, alcoholism, poverty and isolation were powerful abettors of domestic crime -- except that it wasn’t considered crime in those days, thanks to common-law “rule of thumb,” which allowed a husband to beat his wife as long as he employed a rod no thicker than his thumb. “Legal” or not, many women were pummeled, whipped, stoned and raped. Joining a Shaker community promised safety.

The Shakers did not simply protect women from violence at home. They institutionalized women’s equality and, in doing so, not only were they ahead of their time; they were ahead of ours. They began at the top: In the Shaker firmament, the spiritual incarnation of the religion’s founder and leader, Mother Ann Lee, sat side by side with Jesus Christ. This bold proclamation of a dual godhead, composed of male and female equals — coupled with the notion of Ann Lee at the helm of Shakerism — incensed men of the era, many of whom railed against Lee’s teachings in the East Coast towns she visited while preaching The Word. According to numerous accounts taken both from the Shakers who accompanied Lee as well as from observers outside the faith, mobs often abused her, stripping away her skirts and undergarments to check if she was a woman, a man or a witch. Weakened by the assaults, she died not long after completing her evangelical journey.

A few years after the death of Mother Ann (as she was known to her flock), Mother Lucy Wright took over as head of the Shaker Ministry, thus becoming “the Lead” over all existing Shaker villages. Wright presided over the Society from 1796 to 1821, but the 16 settlements she oversaw were each managed on site by two Elders and two Eldresses. The “believers'” lives could be confining—sisters and brethren working hard at narrowly defined jobs with little crossover. Still, no one gender’s work was valued over the other’s, and there was an understanding that the community would fail if the sisters did not respect and support the brethren in their labors, and vice versa. Equality was a practical matter.

As early as 1794, Eldresses’ and deaconesses’ names appeared alongside those of Elders and deacons when the names of the Society’s officials were recorded in the rolls. Yes, a male scribe wrote the men’s names first, at the left-hand side of the page, with the women’s on the right. However, that did not mean that women were secondary or subordinate in those partnerships. Sister Rhoda Hammond was the “Principal” trustee, rather than the two men whose names appeared in the other column. In other words, Shaker women could hold leadership positions—but both genders had to be represented.

Sex did not enter the equation, as it was forbidden. And, because all family bonds were dissolved once you signed the Shaker covenant, there was no marital hierarchy with which to contend. This was significant because elsewhere in 18th and 19th century America, wives were literally — legally — a husband’s property. Enforced chastity, freedom from having to birth and raise children, and exemption from betrothal — these tenets were central to the emancipation of Shaker sisters. Was there a cost? Absolutely. They lived in a society governed by strict rules, but then, so did the brethren. What's important is that neither gender received preferential treatment under those rules.

No sex. No family. This isn’t how most people would choose to live -- not then, and not now. Indeed, the Shakers sowed the seeds of their own oblivion by mandating separation by gender. But their failings — and ultimate failure — had nothing to do with what they came to accept as an unassailable truth: that equality of the sexes is a human right.

What are sexual harassment, rape and domestic violence if not abuses of that right? What if the United States had a gender-balanced government? What if our (proportionally chosen) officials, educators, corporate and religious leaders all had management teams composed of men and women in equal numbers? And what if our deities included females as well as males?

Today, these are radical notions. Not so in certain corners of this country some two centuries ago. In her book "Sisters in the Faith," noted Shaker scholar Glendyne Wergland writes, “The Shakers proved that change is possible despite patriarchal tradition. They owned their belief in equality, structured their society to reflect that belief, wrote about it in their publications, and tried to practice it in their daily life.” She further observes that as early as the mid-1800s, the world outside Shaker communities had begun to sit up and take notice. Activist Harriot Kezia Hunt cited the Shakers as among the earliest proponents of equal rights when she spoke at the 1852 National Women’s Rights Convention in Syracuse, New York. And, in 1879, a female visitor to one Shaker community wrote that, as the “best writers on political economy” were approaching Shaker views on the advancement of women, Shaker beliefs had influenced U.S. political culture. With such prominent 19th century authors and editors as Ralph Waldo Emerson, Nathaniel Hawthorne and Horace Greeley talking, writing and publishing articles about the sect, she may have been right.

But where’s it gotten us? If my math is correct, my great-granddaughter will have to wait until she’s middle-aged before she and the rest of her gender can be assured of earning as much as their male counterparts. My great-granddaughter. One has to wonder how it's possible that Ann Lee and a handful of believers dispensed with that issue more than 300 years ago.