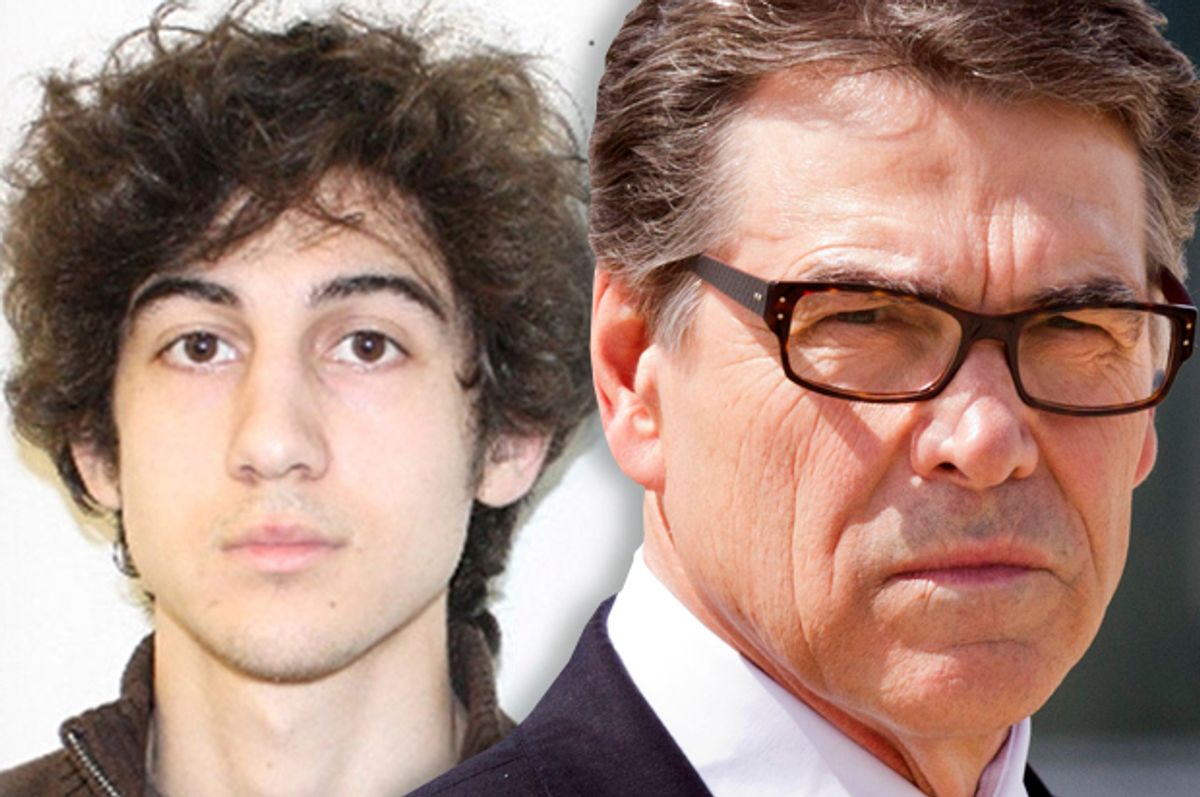 Dzhokhar Tsarnaev, the 21-year-old American convicted for setting of bombs in Boston two years ago, is to be murdered by his government. One can almost imagine the scene: On a sunny day in the near future, Tsarnaev being hauled out on to a platform in central Boston, his crimes repeated aloud by a masked executioner so the gathered crowd can hear it, before multiple poisons are injected into his veins; after writhing and shuddering, a white-coated doctor checks his pulse, before declaring the terrorist dead. The crowd dissipates, onlookers returning to their daily lives, while the media returns to the latest campaign-trail blunder.

Of course, in reality, only the murder is to happen. It will happen in secret, far from the public view.

Since 1976, 1,408 Americans have been put to death by the state. Of these, 1,233 people have been given lethal injections, 158 electrocuted, 11 put in gas chambers, 3 people hanged, and 3 killed by firing squad. Only since 2002 has the execution of mentally impaired inmates been considered cruel and unusual punishment. (Forty-four mentally impaired inmates were executed between 1984 and 2002, including Ricky Ray Rector, put to death by then-Governor Bill Clinton in Arkansas in 1992.) And only in 2005 did the Supreme Court rule that executing minors was unconstitutional. In the words of Justice Henry Blackmun, the ship of state moves slowly when it comes to tinkering with “the machinery of death.”

Advocates of state murder and human sacrifice -- much more accurate terms than the euphemistic "capital punishment" -- point to science’s pacification of the entire ordeal. With advanced chemicals capable of numbing and disabling the body in seconds, the prisoner may die “with dignity” (as the papers so often say). Last year, former Texas Governor Rick Perry, one of the most prolific executioners in American history, justified the killings administered in his state as "appropriate and humane."

However, while there may be such a thing as humane death, lethal injection is the very opposite of it. Last year, a man named Clayton Lockett writhed for minutes after the poisons has been injected into his groin. He raised his head and groaned, “Oh man.” When Michael Lee Wilson was executed last year, he was reported to have cried out: “I feel my whole body burning.” Charles Warren’s final words were: “My body is on fire.” In some cases, more than 30 minutes passed between the injection of poisons and the pronouncement of death, a harrowing length of time filled with convulsions and tremors.

Four years ago, the sole U.S. manufacturer of sodium thiopental -- the executioners’ preferred drug -- stopped producing it, and the European Union banned the export of chemicals that could end up in execution chambers. Several states then began creating secret cocktails of drugs and did not disclose the names of the pharmacies supplying them. Missouri went so far as paying cash for the drugs lest their makers be held accountable. The FDA, in a gutless capitulation, facilitated the importation of these untested cocktails for the killing industry, which the D.C. District Court overturned, berating the FDA for its “callous indifference to the health consequences of those imminently facing the executioner’s needle.”

There are plenty of other reasons, apart from its inherent immorality, why state murder has no place in modern societies. It costs hundreds of millions of dollars more than life imprisonment. It does not deter crime. It targets the poor and singles out African-Americans. These are all sufficient reasons for dispensing with the death penalty, but an even more fundamental reason for banning it is that the death penalty is a totalitarian institution that gives the state the power to decide who will live and who will die by the officers and doctors of the state. This is why, when France did away with the guillotine in 1981— the only constitutionally valid method of execution since the French Revolution — its Justice Minister Robert Badinter said that state murder “expresses a totalitarian relationship between citizens and the state.”

If there is anything that should be considered the very antithesis of American values, it is this dystopic nightmare of organized government killing, done in cramped rooms, using mysterious drugs supplied by unregulated companies. Orwell and Kafka would recognize this killing machine in an instant.

But did Dzhokhar Tsarnaev not intentionally try to kill as many people as possible in Boston two years ago? Did he not target his fellow citizens and blow some of them to pieces without even a hint of remorse? The answer is yes. Dzhokhar Tsarnaev is an adult, he made a horrible decision, and he should be punished by society for his crimes. But to reduce the law to a simplistic eye-for-an-eye logic -- Tsarnaev killed and so he must be killed -- is to reduce civilization and society to a barbarous state, one that the rule of law is meant to overcome. Murder is wrong whether done by the individual or the collective (with caveats around self-defense and just wars). And since the question is coming, I will pre-empt it: If my (Muslim) mother had been killed in Boston on that tragic day two years ago, I would lose my sanity. But I would hope an impartial legal system would not mete out justice the way a vengeful and vindictive individual would. This is the purpose of criminal law: To punish, and to rehabilitate, not to torture and murder -- and torture cannot be extricated from lethal injection.

The death penalty transforms the democratic republic into a vigilante state, with supposedly enlightened governments clinging to a relic from our lesser-evolved days. Indeed, the death penalty, as Albert Camus wrote, is actually “the most premeditated of murders.” Imagine for a moment that the state putting its citizens to death were an individual, detailing the exact date and time of his impending killing, the method that would be employed, the room in which the deed was to be done, the options of the final meal that would be allowed. Horror films are made about such people.

The fate that awaits Tsarnaev is the same fate that awaits Western hostages in the captivity of terrorists. The difference is that the American justice system is suppose to aspire to higher ends, and should be judged by higher standards than that of warlords. The United States understandably wishes to keep this state murder hidden behind walls. If it was revealed to the public just what Tsarnaev was about to face, if Americans could read with their morning coffee the details and images of Tsarnaev’s coming murder, they may rethink support for this peculiar institution.