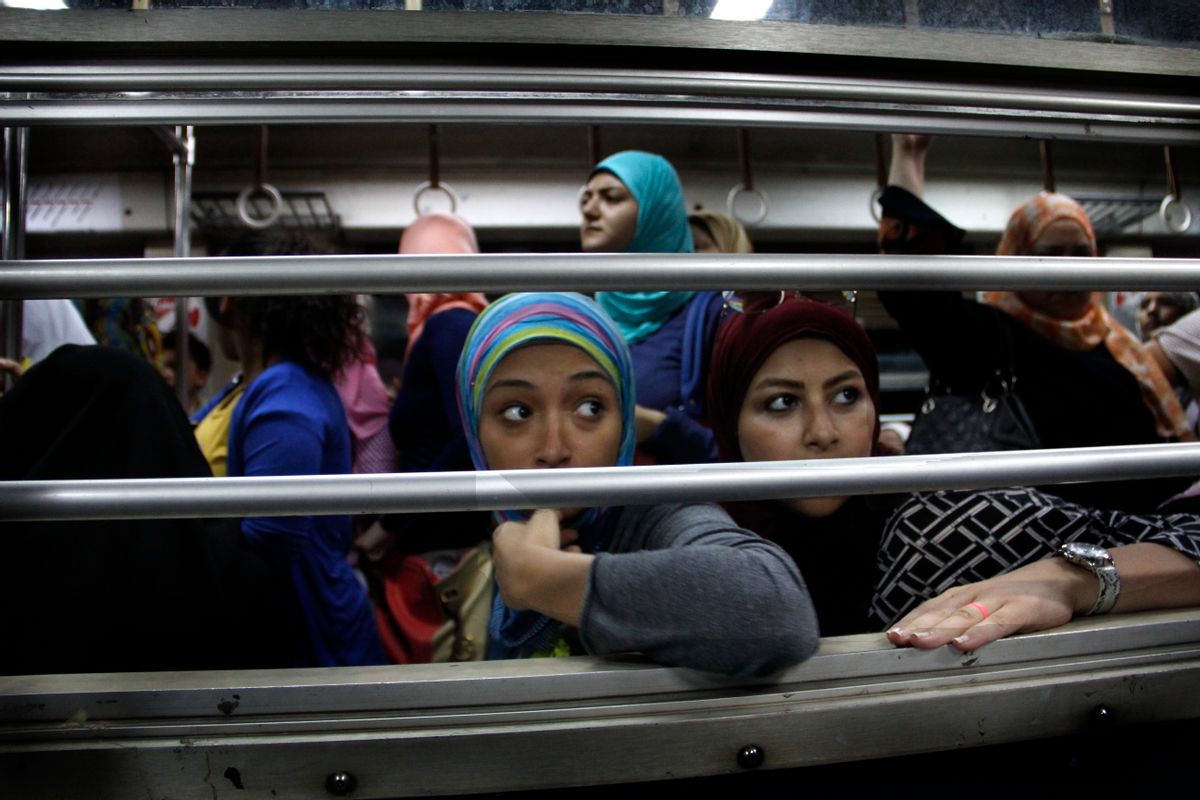 In this Sept. 13, 2014 photo, Egyptian women look from an all-female car at the Shohadaa (Martyrs) metro station in Cairo, Egypt. Before the 2011 Egyptian revolution the station was named for former President Hosni Mubarak. In a city known, as much as anything, for its dysfunction, the Cairo Metro stands as a singular achievement. It's reliable, well-maintained and relatively clean. (AP Photo/Heba Elkholy) (AP)
--

Across the Middle East this week, many watched as an Egyptian court sentenced ousted President Mohammed Morsi and over 100 others to death over a mass prison break during the 2011 popular uprising that eventually brought him to power.

And in Iraq, Islamic State militants seized Ramadi, the provincial capital of Anbar, raising their black flag over the city, killing hundreds and sending thousands fleeing from their homes.

Yemen' fighting continued despite a declared five-day ceasefire in a conflict that has killed more than 1,400 people — many of them civilians — since March 19, according to the U.N.

In Afghanistan, a deadly attack on a bus and an attack by Taliban militants on the Park Palace Hotel left many dead and wounded. In the Pakistani city of Karachi, gunmen stormed a bus with Shiite passengers, ordering them to bow their heads and then shot and killed 45 in the latest attack targeting the religious minority.

Palestinians around the region commemorated the dispersal of Palestinians over Israel's creation during the 1948 Israeli-Arab war.

Former Swiss pilot Yves Rossy, known as 'Jetman' — the first man in the world to fly a jet-fitted wing — made a flight with his new protege Vince Reffet, landing by parachute on Dubai's Palm Island.

The Associated Press highlighted Cairo's sprawling Metro system, which delivers an estimated 3.6 million passengers per day over three different lines and approximately 78 kilometers (49 miles) of train track, both above ground and below the city center.

In Baghdad, tens of thousands of Shiites pilgrims gathered to commemorate the anniversary of the death of the 8th century Shiite Imam Moussa al- Kazim.

Tehran municipality officials adorned the city's 1,500 billboards with copies of paintings by world masters and Iranian artists — including a painting by late Iranian painter Sohrab Sepehri and "The Son of Man" by the Belgian painter René Magritte — that transformed the Iranian capital into a gigantic, open-air exhibition.