Despite not giving us Harris Olson Prods., the "Mad Men" finale leaves our two complex female leads in good places 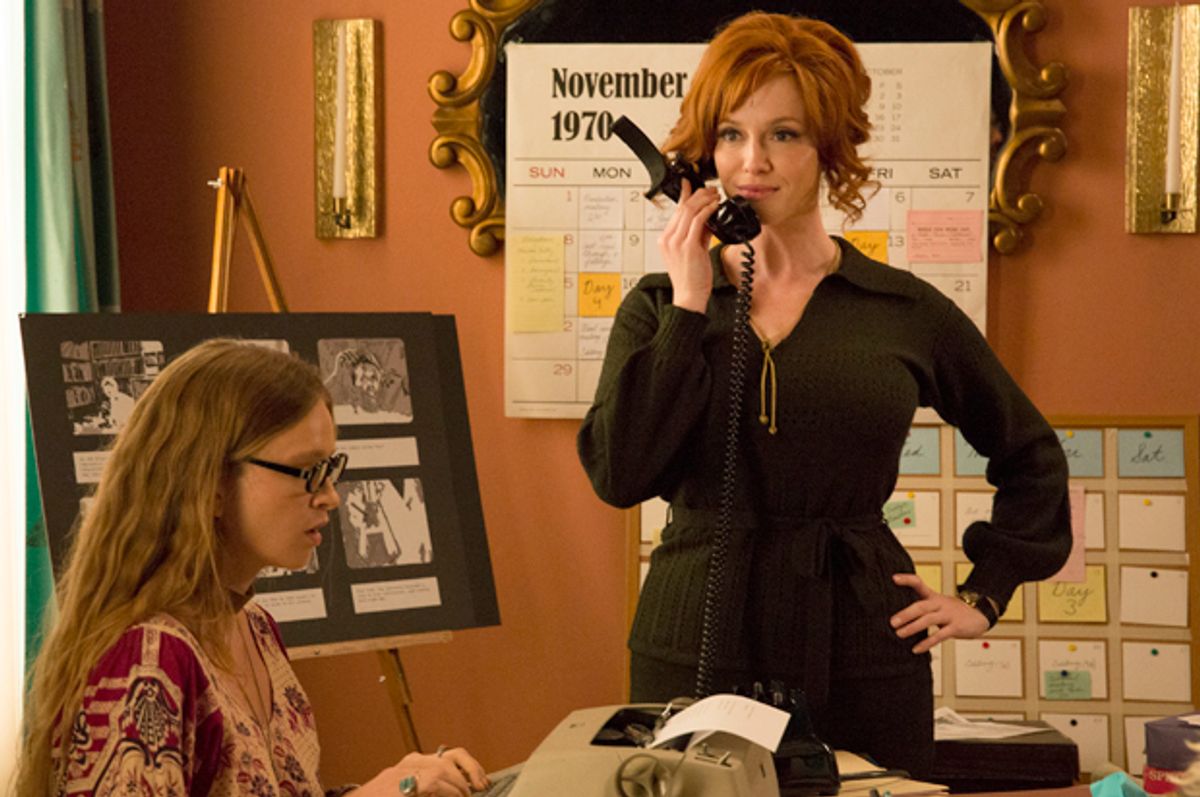 “Stop saying that. He’s not dead.”

“There are a lot of better places than here.”

Preach, Meredith. She is out of a job because Don went MIA to find himself (again), but she at least gets to leave with her perspective intact. Like Shirley before her, who triumphantly quit mid-merger because “advertising is not a very comfortable place for everyone,” these women know that there is a world outside the walls of Sterling Cooper & Partners.

The exchange with Roger is about Don’s latest disappearance act, but I found myself thinking about Joan and Peggy while bubbly Meredith wished her boss well, even as he screwed her over. Joan and Peggy, our two main Mad Women, have endured small indignities and abject abuse, but we leave them, in the “Mad Men” series finale, in a good place. (Not quite grinning on a hilltop in Big Sur, still.) They have always known there were better places than here, and it's a lesson they will learn again -- even as they embark on their bright futures.

Peggy is on stellar professional footing, newly in love with Stan -- the best, chillest dude (with the hottest dad bod) in all of New York City. And if Pete Campbell was right, she is in all likelihood on her way to becoming a pioneering female creative director within the decade.

At the close of the series, Joan is embarking on a new production business and is dinged up but not broken by the shithead who wanted her to choose between her career ambition and a lifetime of coked-up couch boning. Roger Sterling is leaving a chunk of change to support Kevin, meaning Joan is a bit freer to take risks with her severance. So she's plugging away, still sharing that too-small apartment with her mother and son, but working toward something for herself.

Things are looking up for Peggy and Joan, but it's fair to say that there are still a lot of better places than here. It is 1970 and the sexist caveman antics that drove Joan out after the merger with McCann Erickson and continue to put the squeeze on Peggy aren’t going anywhere. (For like, four more decades and counting.) Their struggle is still very real.

It may have been tempting to give viewers the Feminist Dream Team that they’ve long hoped for. When Joan pitches the business to Peggy -- offering a partnership right out the gate, something that could take decades to achieve on her own -- I found myself rooting for her to just say yes and sign on. Imagine it! Joan and Peggy take on the world! We've all found ourselves rooting for these two to sign some kind of sisterhood blood oath, but the show never fully delivers on it. These two women, straining for so long under the weight of being the Only Ones, have had to make choices that take them backward even as they move forward. Theirs has always been a fraught alliance.

Joan's offer sounds tempting, but Peggy turns her down. Maybe because it’s a career change, and Peggy really does love her work. Or maybe because if Peggy has learned anything in her rise from secretary to copy chief, it’s that navigating the workplace is a minefield. And while she may have to slug it out for a decade to get to creative director in her current gig, the risk involved in the new undertaking would require, once again, working 400 percent harder than any man with very little guarantee that the venture will work out.

You can see Peggy’s exhaustion -- the anxiety of always having to be better just to be recognized as good -- in her exchange with Stan, before they get all gooey and he rubs her shoulders while she types. Stan is telling Peggy that there is more to life than work, and she spits back: “Spoken like a failure.”

More accurately: Spoken like a man. Stan’s success, while maybe never a given, was always more assured. His chill demeanor is in part due to that fact. He knows that being good is enough for him. Peggy, with rare and delightful exceptions, is the opposite of chill because chill means career death for women like her.

Stan’s ease is charming and a perfect compliment to Peggy’s high-strung ambition, but it’s also a reminder that things are different when you’re a girl.

But the move to strike out on her own is an obvious one for Joan. Not just because she’s currently unemployed, so why the hell not, but because she has always excelled at networking and management, and, despite coming into some money after the merger (even though she left with 50 cents on the dollar of what she was promised), she would never be one to drop out of the work force to flit around with some sinewy tan man she met in California. (I do not know his name, and I refuse to look it up because misandry.)

If the show’s last seven seasons are any indication, the path forward for Peggy and Joan is going to be just as knotty. They will be dealt shit hands, and they will deal some shit hands to others. But this has always been the beauty of “Mad Men.” Like in life, things are okay, until they aren’t. People are good until they’re bad. (And then good again.) They’re treacherous until they’re loyal. They’re moving forward until they find themselves somewhere else -- usually a few paces off from where they thought they’d be.