"Game of Thrones" recap: Another brutal wedding, another vicious rape

Welcome to cable drama, where a woman's rape is an opportunity for a man's character development 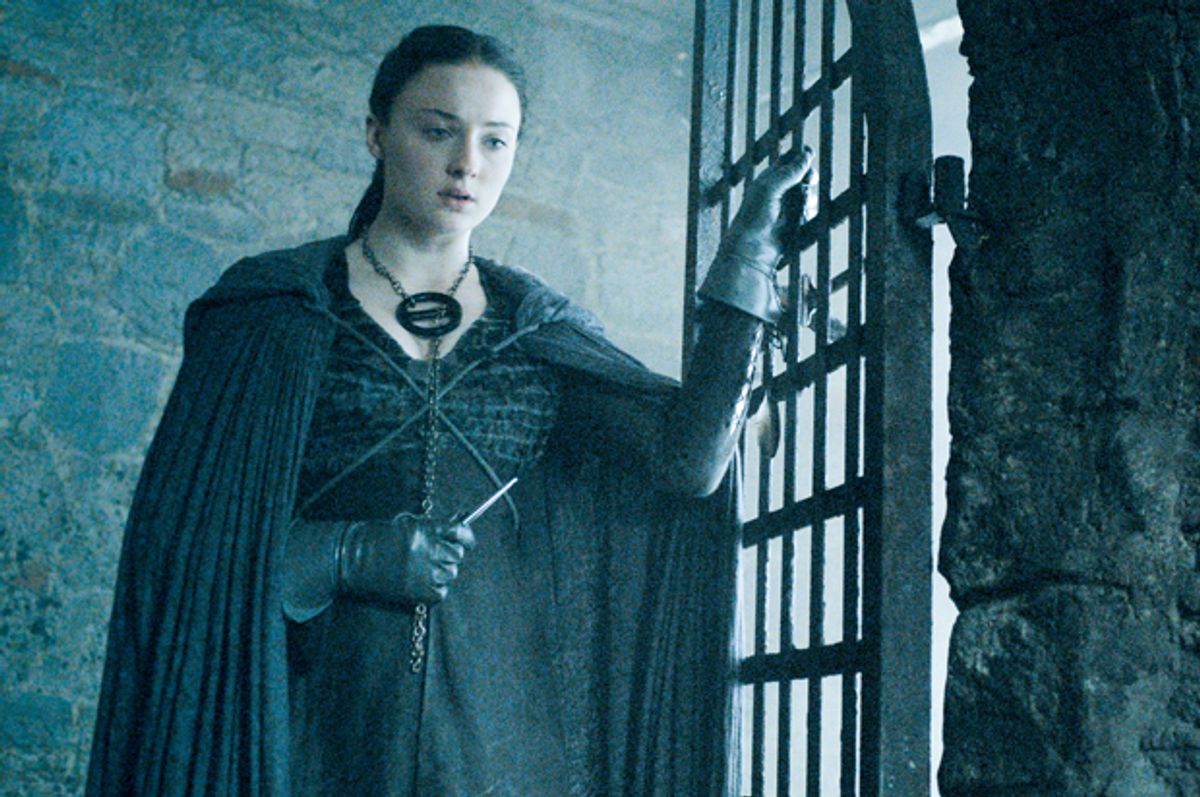 If you watch enough prestige television, you come to realize that the most traumatic thing that could possibly happen to a man is having to suffer the pain of a woman he knows getting raped. It’s not, actually, the most traumatic thing to happen to a woman, likely because it happens all the fucking time, but for a man there’s really no greater indignity. To exist as a woman on a cable drama is to understand that at some point you’re probably going to be raped by someone you know or in the presence of someone you know or as a punishment to someone you know, but it’s okay because in the end, it just gives you something to overcome and everyone knows that having something to overcome is the only way to prove that you are a strong woman.

In fairness to “Game of Thrones,” it’s not the only show on television that falls into the “how do men feel about rape” trap. Throughout its first season, the freshman Starz drama “Outlander” has repeatedly pulled focus from the actual victims of sexual assault to instead dig into how their male loved ones feel about the matter. Similarly, before ending its run on HBO, “The Newsroom” featured a storyline that worried much more about what might happen to a man accused of rape than it did about the woman victimized in the act.

The most maddening aspect of this shift in perspective is that it eliminates the idea that TV creatives don’t understand how damaging and horrifying the act of rape is, as might have been suggested by how frequently they resort to it as a plot device. Now we know that they absolutely understand the gravity of the situation, they’re just more interested in how men traverse those horrors.

It’s a particularly upsetting development on “Game of Thrones,” in light of how much of season five has been given over to the agency and empowerment of its female characters, meaning that — as is often the case with this show — it’s two steps forward, one step back. And while these reviews are intended to view the show in complete relief from the books its based on, it’s still worth noting that Sansa’s fate isn’t something that’s been ported over wholesale from the books. While the plots may follow roughly the same trajectory as another, completely unrelated character’s arc, this was not something that had to be implemented by David Benioff and D.B. Weiss in order to protect the sanctity of the novels. This was a choice and the choice was to marry off a teenage girl, rape her, and not even have the dignity to care primarily about her feelings about her fate.

As it stands, there’s really not a lot of positive happening for any women in the “Game of Thrones” universe this episode. The Sand Snakes, renowned fighters, take on two swordsman, one of whom only has one hand, and can’t manage to defeat them before they’re all taken into Dornish custody for trying to abscond with Princess Myrcella. Margaery gets imprisoned because Cersei tricked her into lying under oath to protect her brother and now they’re both awaiting trial. Olenna Tyrell is back in King’s Landing to try to get things under control and only seems to make matters worse. You’d think things were going pretty well for Cersei, but for the fact that it’s really only a matter of time before the Sparrows get wind of her brood born of incest. Even Arya’s busy getting whipped for telling lies to herself, while tricking sick little girls into suicide, and busying herself at the corpsewash, none of which sound like great situations, but since she apparently wins herself a trip to the “Futurama” Head Museum at the end, maybe things are looking up.

But still, nothing the episode introduced was as damaging as what happens to Sansa. The character who had shown the most growth and potential for becoming her own woman, even earlier in this episode standing up to Myranda as she tried to intimidate her about Ramsay’s sinister sexual habits, is broken down in a matter of minutes, then not even given enough agency to suffer her own assault. It will take a lot for “Game of Thrones” to come back from this grave miscalculation but, knowing them, they’ll have to wait to see how Theon reacts to the episode’s reception before knowing how they really feel about it.

The Jorah and Tyrion Best Friends Tour continues to march through the countryside and their conversational topics range from “People We Love Who Have Died” to “Dany As Queen: Yes or No” before they are set upon by the crew of a nearby slaver ship who’d come to land for water. Tyrion’s quick thinking manages to spare the lives of them both, as well as the livelihood of his penis, as apparently dwarf penis is a hot commodity on the black market. This development is most notable for spawning perhaps the greatest line of dialogue in television, if not human, history: “The dwarf lives until we find a cock merchant.”

Littlefinger is in King’s Landing and informing Cersei that Sansa is at Winterfell getting married off to young master Bolton as they speak, in an attempt to win Cersei’s trust and her assurance that she will name him warden of the North if he’s able to shore up Winterfell for her. It’s impossible to tell who’s getting played whenever Littlefinger is doing his dirty business, but it does make me think that he missed his calling as a Faceless Man.

It’s sad that in this universe merely suffering a post-wedding rape means that your nuptials went pretty well, all things considered.