Ukrainian robots, Latvian pirates, so many wacky hats: The American's guide to the Eurovision Song Contest 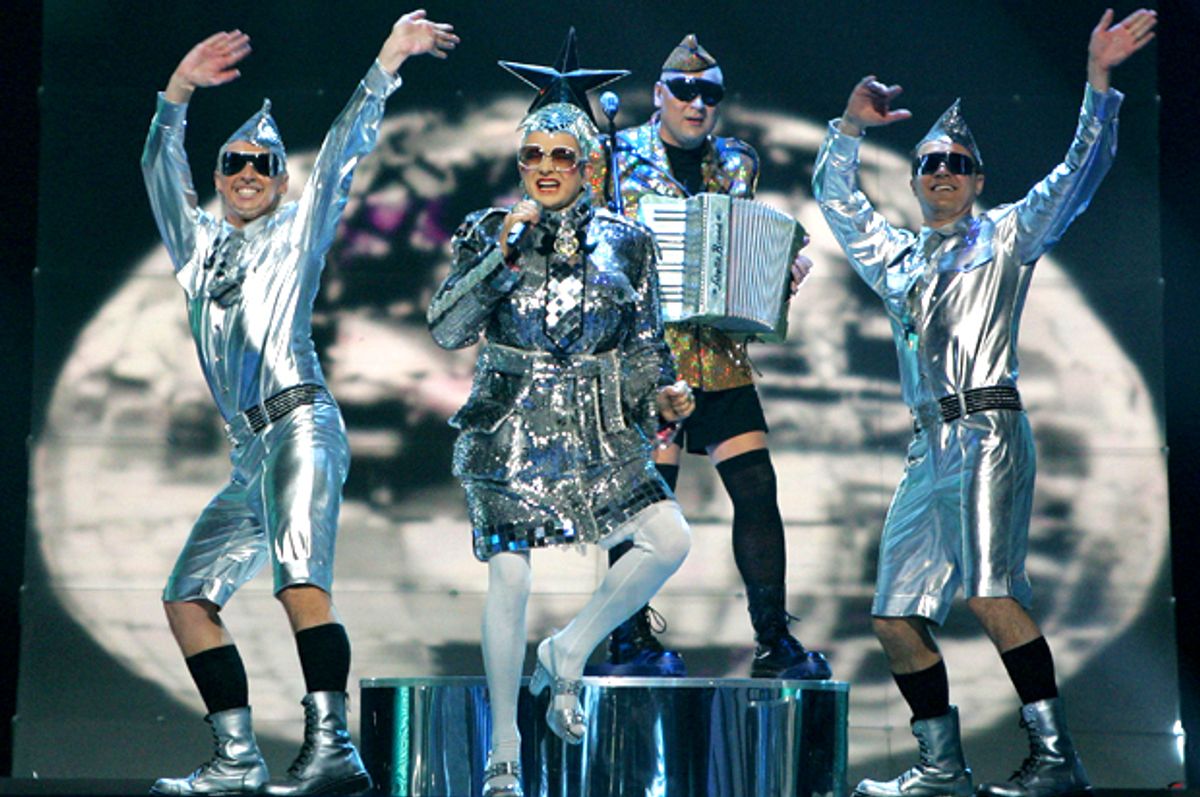 Verka Serduchka from the Ukraine performs during the final of the 2007 Eurovision Song Contest. (AP/Alastair Grant)
--

Pop quiz: What annual European-based televised event, the longest-running in world history, is viewed by nearly twice as many people as the Super Bowl? Need a clue? It may feature Moldovans with giant black cones on their heads, Latvians dressed as pirates, yodeling, Amazonian Scandinavians in breastplates, and is casually referred to by some as “the gay Olympics.” The answer is the Eurovision Song Contest, which last year drew 195 million viewers (and that statistic is just from 41 countries monitored—several hundred million more may have watched from elsewhere in the world), blowing the Super Bowl, with its measly 114.4 million viewers, out of the water.

Never heard of it? I can’t say I blame you. I’d never heard of Eurovision either, before I married a Slovene and settled in as a European expat. Now I’m hooked, but not so much for the quality of the contest (more on that later), but because of the truly bizarre spectacle.

The Eurovision Song Contest began in 1956, founded by the Swiss European Broadcasting Union, with the goal of providing “light entertainment” that would bring together the nations of Europe for a friendly competition. It features 52 countries (for some reason Israel and Azerbaijan and newly Australia are considered sufficiently “European” to be included), each of which send an act to perform an original three-minute song. For logistical reasons, the music is on playback, so the only thing live is the singing and dancing, which makes it more like an extremely high-end karaoke event than a proper concert.

What immediately strikes the American viewer is the excruciatingly high level of camp and kitsch in a lot of the acts. Oh sure, there are serious, self-conscious songs, often sung by statuesque women with wind-blown hair. There is bubblegum techno-pop, often sung by Bieberite gyrating boys with rubicund lips. And there are Moldovans with giant black cones on their heads. Some of the acts (often the most entertaining ones, for the sheer weirdness of the spectacle), are so obviously not taking themselves seriously that they embrace the freak show vibe that seems welcome at Eurovision. For Americans, used to thinking that the chance to be viewed by several hundred million people means that you should try to appear cool, or at least not completely batshit insane, this may come as a surprise. I imagine that many a Twitter account mid-contest sparkles with “WTF” on repeat. The Russians once sent a crack team of babushka grandmothers in traditional dress, and I will always remember the distressingly catchy show tune of the Latvian pirate act, with the priceless lyrics “With a hi-ho-ho and a hi-hi-hee/We’re bound to be close to the sea/The captain will stand on the bridge and sing/Pirates are all we can be.”  There’s the Finnish Gwar lookalikes dressed as Middle Earthlings, a hyper-caffeinated pair of Irish twins decked out as medieval robots, and an aging Spanish Elvis impersonator alternately dancing like Michael Jackson and Robocop. There was a Polish hip-hop blondie flanked by cleavage-wielding Slavic beauties, conspicuously stooped over washing boards and suggestively churning butter, flashing the audience into submission. The list goes on, more memorable than good, though some of the songs stick with you, like well-chewed bubblegum in your hair.

Then there are acts that just have one foot in the weird bucket, which we might call surreal acts—seemingly normal but for a single, what’s-wrong-with-this-picture element. Like the nice Dutch woman singing a perfectly normal pop song in a normal way, but for some inexplicable reason wearing a Native American headdress. A Monty Pythonian Turkish band whose act largely consisted of repeating the word “opera” for three minutes. Or last year’s winner, Conchita Wurst, an Austrian drag queen singing a straightforward, if melodramatic, diva song (that’s not the surprising part, as drag queens have appeared not infrequently), but wearing a pronounced beard to offset the elegant feminine glamour of her manner and outfit. Europe voted her the winner by a landslide, and hats off for such overt liberal open-mindedness. But the effect of watching Ms. Wurst was undeniably surreal.

Very good performers and very good songs are mixed in among what most would agree is a marginal propensity toward mediocre pop acts spiced with a dash of weird. A not-the-least-bit-weird French chanteuse, Patricia Kaas, did not win, but translated those hundreds of millions of viewers into selling 17 million albums. Eurovision is the sort of stage that can make careers: Its most famous alumni are ABBA, who won in 1974 with “Waterloo,” and the young Celine Dion, who performed for Switzerland in 1988. And you’ve surely heard “Nel Blu Dipinto di Blu,” popularly known as “Volare,” the Italian act from 1958.

It’s also the proto-reality show, pioneering the idea that viewers call in to vote on the winner (and pay for the privilege). Individual viewers can phone in and vote, but never for their own country. There’s a moderately dramatic roundup of each participant country’s results, where a local TV presenter comes on live and announces which three acts got the most votes from their constituents, and the totals are tallied up until we have a winner, who performs their act once more, in triumphant encore. Ah, the voting. Political science courses could be dedicated to it. Watch a Eurovision a few years running and it becomes oddly apparent that the voting is not so much rigged as voluntarily skewed in favor of nations voting for allies and former aggressor countries. It’s as if each country is apologizing for having invaded, or optimistically requesting not to be invaded in the future, in exchange for the goodwill of having offered a conciliatory Eurovision vote.

Few vote for the French who, in a very French way, only send acts that sing in French (most other countries perform in English or a mixture of verses in English and their native language) and their TV presenters are the only ones, out of 52 countries, who refuse to speak English when announcing the voting results. The voting is so consistent that you’d think something funny was going on. You could make an effective drinking game out of betting on whom countries will vote for. For example, former Soviet satellites always seem to vote for Russia. Greece and Turkey are inevitably voting for each other, as if in apology for former grievances. I’ll bet my last rigatoni that San Marino will vote for Italy. Former Yugoslav countries tend to vote for Serbia and Serbia votes for Bosnia (and I dare you not to get hooked by this super-catchy Yugoslav number, circa 1990). Germany tends to vote for Israel. And so on. As the votes clock in, you can almost hear sociology professors sharpening their pencils.

Which brings me to my main objection, which is that no one seems to vote for Slovenia. This, despite the fact that we’ve had outstanding and normal, non-kitschy acts for most of the past few years. We rock out and, in the preliminary polls, the public loves our acts. But when it comes to voting, not so much. I guess we need more allies or former nemeses. This year we’ve got another good song that could easily be mistaken for Adele’s latest single, performed by the talented, but unpronounceably-named, Maraaya, who will wreak havoc with spellcheckers the world over. In a recent official poll, we were the favorite. But how will the voting go? It can’t possibly be as bad as the mayhem of last year’s French act, which got no votes at all, coming in dead last with two points (Austria won with 290), despite their lyrical insistence that they would really like a mustache.

When confronted with such a spectacle, so very foreign to what Americans expect to see on popular television, I recommend embracing the weird, casting aside the body armor of irony, and drinking heavily. I’ve devised several drinking games to accompany the initiate into the rainbow-glitter train wreck of Eurovision. During the contest, divide your friends into teams: one drinks when the act currently on is a sexy female solo diva, another when it’s a Bieberian bouncing pretty boy, another when it’s a surrealist act featuring some, and another when it’s just so weird it makes your head melt. Then begin again with the voting: guess how each country will vote, or take a shot.

For me, there’s an element of examining possible life paths to watching. From age 16, when I lived in Paris on an abroad program through my boarding school, I knew that I wanted to live in Europe. I’ve always felt more at home here than in the States. But I was never particularly bothered where in Europe. I’ve lived in France, England, Spain, the Netherlands, Italy and, now, Slovenia. I loved them all. It was mostly a question of where the future Mrs. Charney was to be from (as I knew I wanted to marry a European). When I ended up with a Slovenian goddess (who is currently rolling her eyes beside me, as I write this), the decision was made for me. But when I see the various Eurovision performances, the brief artist-bio videos that are like tourist promos, the 30-second cameos of local TV personalities announcing their national votes, I see an array of potential nations to which I might have expatriated. Fate might have sent me a Norwegian, an Armenian, an Austrian, and I imagine how things would have panned out differently. As it worked out, I’m on the sunny side of the Alps, up to my elbows in smoked sausage and my grandmother-in-law’s award-winning homemade schnapps, and will be cheering this year for Maraaya. But I’ll be keeping my fingers crossed for the batshit spectacle.

Five Past Acts You’re in Danger of Liking

Five Acts to Watch This Year

Eduard Romanyuta “I Want Your Love”

The Makemakes “I Am Yours”