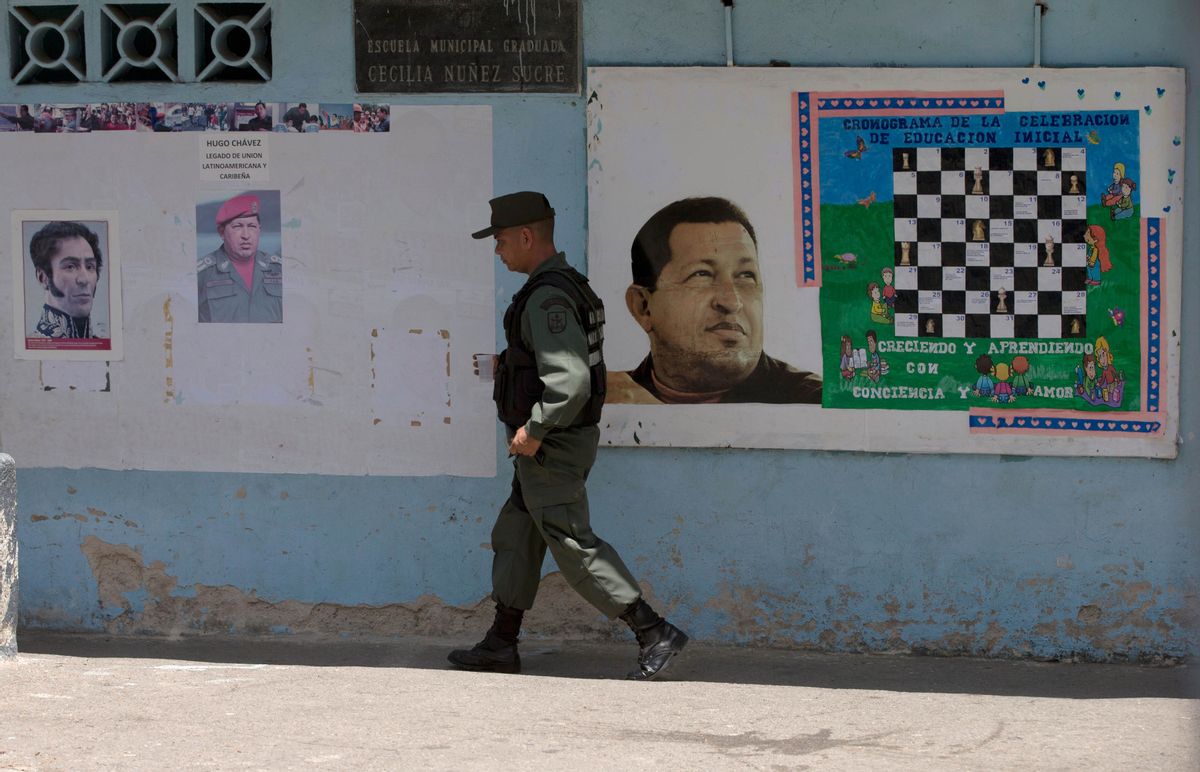 A Bolivarian National Guards officer walks near images of the late Venezuelan President Hugo Chavez and Independence hero Simon Bolivar, left, at a poll station in Caracas, Venezuela, Sunday, May 17, 2015. Venezuelans are voting to select the opposition leaders who will run against the ruling socialist partys candidates in upcoming legislative elections thought to be government critics first chance at an electoral victory in years. (AP Photo/Fernando Llano) (AP)
--

CARACAS, Venezuela (AP) — Venezuelan opposition candidates, campaigning on a shoestring and sometimes from behind bars, sought a chance Sunday to take part in what may be their best chance in years to defeat the country's socialist government.

Turnout was less than 7 percent, two points lower than in the last legislative primaries, held in 2010. Few voters had been expected to come out for the contest in which just 42 of the country's 167 legislative seats were in play. The other spots have already been reserved by opposition coalition leaders.

Further hampering interest was the fact that date of the general election has not yet been set, though the administration of President Nicolas Maduro has pledged to hold the contest in late November or early December.

The primary also has received little coverage in much of the pro-government press and the coalition said it's so short of funds that it asked candidates to put up 150,000 bolivars, about $500 at the black market rate, to finance their campaigns. No major incidents were reported Sunday, though some voters complained that television news had all but blacked out the event.

The coalition made up of 29 often squabbling parties holds about a third of the South American country's legislature. Opposition parties have not captured a legislative majority since Maduro's mentor, the late Hugo Chavez, won the presidency 16 years ago. They have lost every recent national election.

But the coalition now benefits from widespread discontent with Maduro, driven by mounting shortages, the world's highest inflation and rampant crime. If the election were held today, polls indicate that the opposition would win by a landslide.

Maduro's presidency isn't up for a vote, though. His term ends in 2019.

Coalition leaders say they are capitalizing on a new wave of discontented Venezuelans by catering to younger voters who took to the streets last year for weeks of sometimes violent protests against the administration. A third of primary candidates are younger than 40.

One high-profile candidate victorious in Sunday's primaries is still jailed on charges related to last year's protests: Daniel Ceballos, the former mayor of the restive city of San Cristobal. In a quirk of Venezuelan law, a win in the general election could spring the 31-year-old politician from jail because legislators receive immunity from prosecution during their terms.

Other winners include an outspoken student leader who led street demonstrations last year, a well-known economist, a former mayor who was recently released from prison after serving time for failing to crack down on protesters.

Maduro, whose popularity has hovered in the 20 percent range for months, has repeatedly boasted that his United Socialist Party of Venezuela will clobber the opposition at the polls.

Speaking at an official event, the current head of Venezuela's legislature, Diosdado Cabello, called the primaries a scam.

"You go to the voting centers and they're bare," he told a crowd of Chavistas. "Loneliness is all you find there."

The governing party will hold its primary elections next month, with twice as many seats up for grabs.