What was missing from the "Mad Men" finale (Hint: It's not a Coke commercial)

For a while, it looked like Matt Weiner's celebrated show wanted to tell us something about consumer capitalism 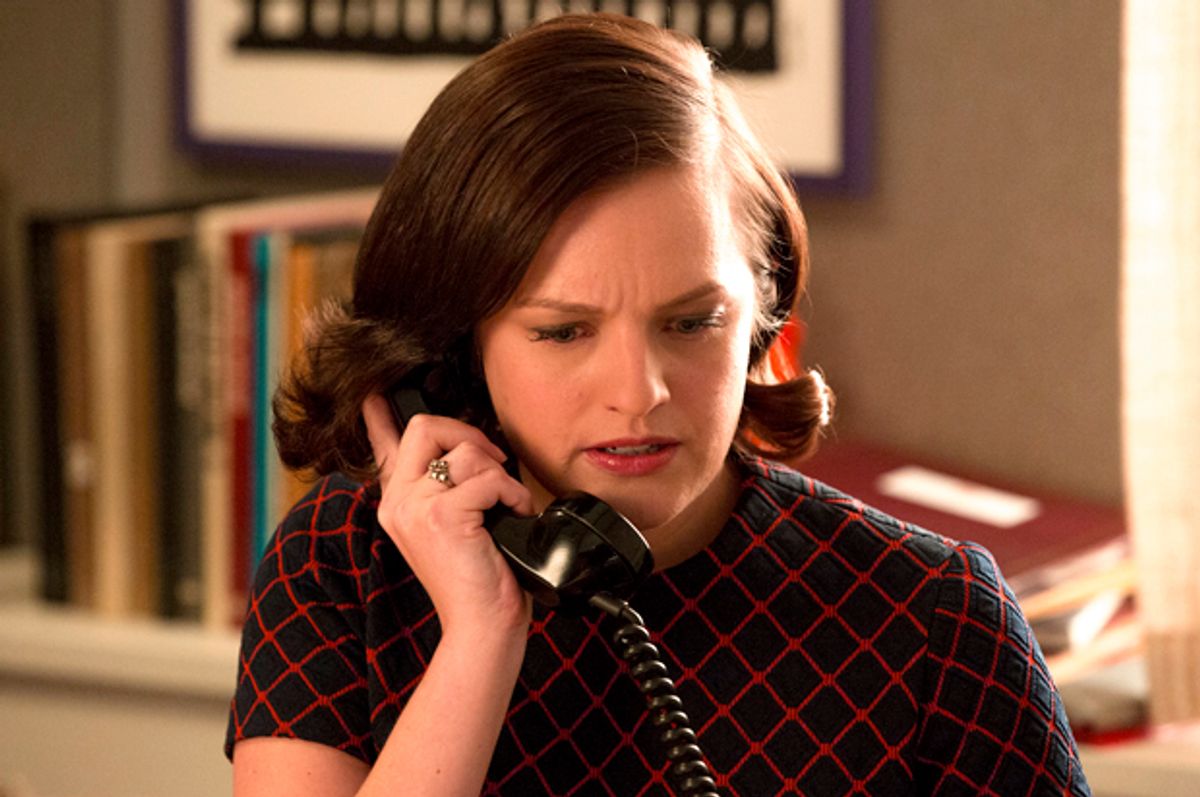 Over the years of “Mad Men”’s run, there’s been a sense that this is not just another show – even another sharp-looking, prestige show – but a serious look at an era, a critique of racial and gender attitudes, a kind of running social history of the postwar years. Or that it was in complicated ways “about us” – a zeitgeisty show about our own zeit. With all the talk about post-“Sopranos” cable television as the new novel, the new foreign film, “Mad Men” has borne a lot of weight.

There’s also been a contrarian side that says the show is just a mid-century modern soap opera, as sharp-eyed critic Daniel Mendelsohn wrote in a 2011 New York Review of Books essay. Mark Greif of N+1 called the series, in the London Review of Books, a blend of Now We Know Better with Doesn’t That Look Good. “The drinking, the cigarettes, the opportunity to slap your children!”

Each episode has leaned a little one way or the other, but it’s hard not to concede, now that the celebrated show has met its maker, that the doubters were right. It’s great to look at, and there were some powerful performances, among them John Hamm as Don Draper and Elizabeth Moss as Peggy. But the supposed social critique – fun while it lasted – resolves in about as glib and shallow a way as we could have imagined. In first season or two, “Mad Men” seemed to be working hard to go beyond the obvious; the conclusion was obviousness itself.

The conclusion to a seven- (or is it eight?) season show, especially one with a wide range of characters and spanning such tumultuous years, was bound to leave a lot of people disappointed and a lot of strands unstrung. And each audience was looking for something different: If you liked the creative tension in the ad office, you probably dropped out a few seasons ago. If you were into the show for its sleek ‘60s cool, you probably turned it off when Sterling grew that awful mustache. If you wanted to see Joan play out her destiny, you were probably gratified. And so on.

So the show did not do a bad job resolving its characters lives. It’s just the social-critique part that ends up being pretty inert. Why did we ever think this was more than just a TV show?

There’s good reason why the “Mad Men”-is-serious-stuff notion took hold. Showrunner Matt Weiner is a smart dude who wrote for “The Sopranos,” still considered either the greatest television series ever or the show that opened to the door to whatever you think the greatest-series-ever happened to be. Before that, he attended feminist-progressive Wesleyan, and clearly inhaled a lot of substantial ideas there.

Throughout the show there have been nods in the direction of real arguments or debates in a way we rarely see even in prestige TV. There are at least several conversations that illuminate pages from Betty Friedan’ “Feminine Mystique”; there is at least one scene that could come from an essay by socially conscious economist John Kenneth Galbraith. Almost every episode seems aware of what sociologist Thorstein Veblen diagnosed of conspicuous consumption. At its best the show seems to say, “Sure, consumer capitalism and status obsession look like fun from the outside, don’t they, but here’s what they’re really about.” It’s hard to think of a mainstream American television program that even got started on the notion of what postwar affluence and consumerism would do to our souls. Some of the feminist ideas were played out over time, even through last night’s final episode.

And all of this makes the yoga-induced I-want-to-buy-the-world-a-Coke closing scene so disappointing. The notion that Madison Avenue would harness countercultural impulses that Draper eavesdrops on (in early seasons in Greenwich Village and in the final one in Big Sur) is a fascinating one. But since the idea was worked out almost two decades ago, in a book that has served as blueprint for the show, it seems, since its 2007 debut – “The Conquest of Cool,” by my Salon colleague Thomas Frank – is a little, uh, lame. (The book even gets into "Hip versus Square in the Cola Wars.") At the very least, it doesn’t push the show’s ideas or critique or look at history forward in any kind of way. To go seven heavy, debated-over seasons to end up with the premise of Frank’s first book…? (Though the departure by private plane of Rockefeller Republican Pete Campbell and his wife to Wichita make us wonder about a Weiner-helmed miniseries of what’s-the-matter-with-Kansas.)

Let’s call it a really good TV show, full of lovely interiors and an often-gripping (if sometimes outlandish) storyline that seemed to fragment by the end. “People – liberal minded young people in particular, in my experience – keep talking admiringly about the show’s ‘critique’ of the hypocrisies of advertising and the shallowness of consumerism,” Mendelsohn wrote in The Mad Men Account.” “But simply to show a lot of repellent advertising men acting repellently does not constitute a meaningful critique; it’s a lazy one liner.”

My guess is that Weiner and the rest thought they were up to something early on, and could have filled in these early outlines. By the end, though, the show clearly had something else on its mind.