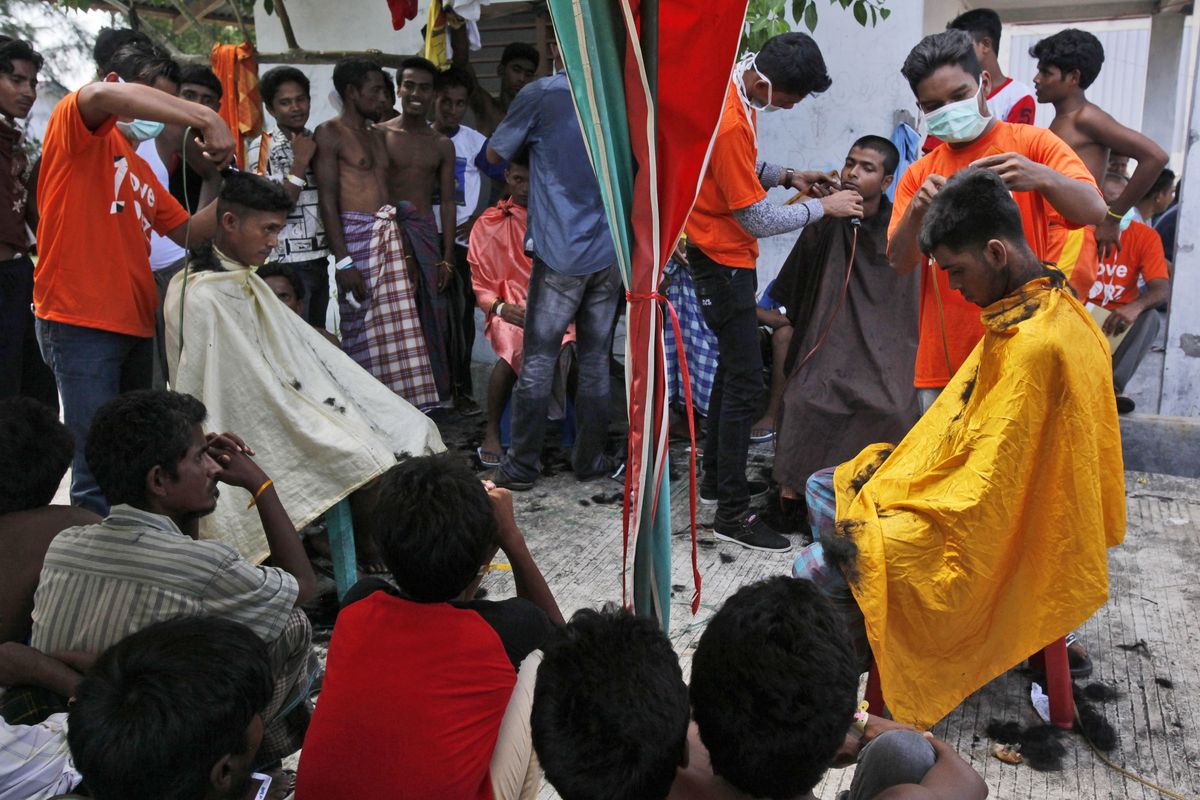 Ethnic Rohingya men take free haircut service provided by a local NGO at a temporary shelter in Langsa, Aceh province, Indonesia, Tuesday, May 19, 2015. Indonesia has "given more than it should" to help hundreds of Rohingya and Bangladeshi migrants stranded on boats by human traffickers, its foreign minister said Tuesday, a day before she was to meet with her counterparts from the other countries feeling the brunt of the humanitarian crisis. (AP Photo/Binsar Bakkara) (Binsar Bakkara)
--

The Islamic State group's capture of the provincial capital calls into question the Obama administration's approach to rebuilding the Iraqi army as Shiite militias are poised to launch the counter-offensive.

2. WHOSE STRUGGLE FOR SURVIVAL IS GETTING TOUGHER

With the Syria conflict in its fifth year, many of the close to 4 million Syrians who fled to neighboring countries are unable to work legally, while funding gaps force aid agencies to slash vital support.

The Texas Department of Public Safety's Joint Information Center issued a bulletin May 1 that cautioned authorities about increasing violence between the Bandidos and the Cossacks.

The National Transportation Safety Board says it could be a year before it determines the probable cause of the derailment.

A tug-of-war between Chechen leader Ramzan Kadyrov and Russian federal law enforcement reflects an apparent effort by the Kremlin to cut the 38-year-old strongman down to size and make him obey the rules.

6. WHEN CLINTON EMAILS WILL BE RELEASED

The State Department proposes posting portions of 55,000 pages of messages from the former secretary of state by next January.

The Southeast Asian grouping known as ASEAN has long been toothless in handling members' internal issues and may achieve little now as three countries struggle with thousands of Myanmar's persecuted minority stranded off their shores.

As the value of the U.S. currency steadily strengthens, the consequences are being felt throughout the world.

9. WINGSUIT FLIER THOUGHT HE COULD MANAGE THE RISK

Dean Potter risked flying off the vertical rock walls he was famous for scaling with little more than a parachute on his back and thin fabric wings.

Boxing fans and their lawyers are calling the match between Manny Pacquiao and Floyd Mayweather Jr. a fraud and want their money back.