David Letterman staffer: Madonna was so high the night she dropped 14 F-bombs

The very funny behind-the-scenes story: "She started giggling again. 'We smoked a little endo before we came here…' 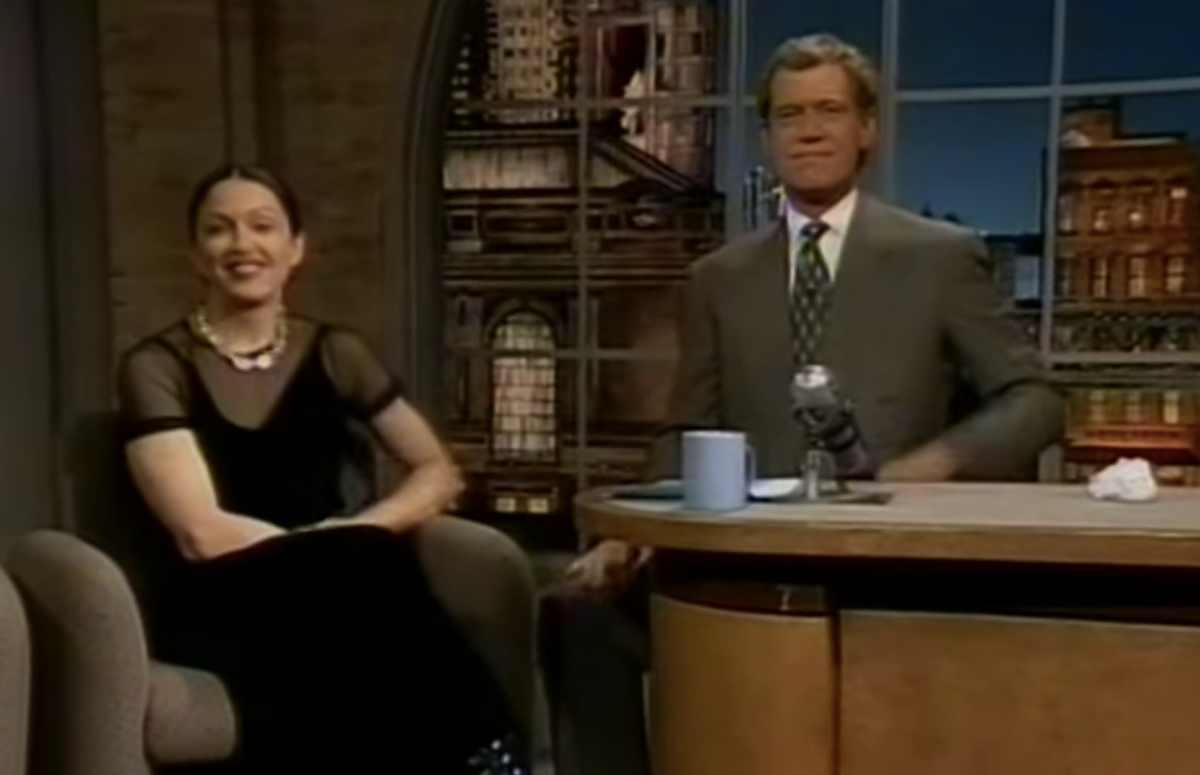 Daniel Kellison is a big-time producer now, running Jackhole with Jimmy Kimmel and Adam Carolla. But in the 1990s, he landed his first job on the David Letterman show, doing a little of everything -- researching, producing, booking guests.

In an amazing new Grantland piece, he spills the behind the scenes secrets from some of the biggest names he worked with. (Funniest detail: there was a $500 bounty for booking a Beatle on the show. The executive producer booked Ringo Starr, went to collect from Dave, who replied, "Ringo doesn't count.")

But the best story by far is of that night in 1994 when Madonna went crazy on the show, dropping 14 F-bombs -- then believed to be some sort of a record for network TV, or at least late night -- taking off her underpants and asking Letterman to smell them, and so much more.

In a subsequent appearance in 2009, Madonna admitted to Letterman that she'd smoked a joint before coming on. But Kallison tells an even wilder story. He says it was endo -- slang for the highly intoxicating bud tips of the Cannabis indica strain of marijuana -- that she was smoking. That explains it!

As Kellison tells the story, there was a plan for the appearance. Letterman had been making fun of Madonna every night. She would play back several of the jokes to Dave, and after he's confronted with the videotape, ask him to explain what he meant. Everyone thought it would be great.

The day of the show, she arrived to much fanfare and press anticipation, but with no entourage. Her only accompaniment was her makeup person, Kevyn Aucoin. I walked up to her dressing room, knocked on the door, put out my hand, and said, “Hi, I’m Daniel.” She didn’t get up or offer her hand. Instead she said, “Suckmadick.” I took a beat. “Sorry?” She looked at Kevyn, smiled, and said it again, slower, like a petulant 8-year-old child challenging a parent: “Suck–ma–dick.” She and Kevyn began laughing hysterically. Immediately, I thought: We’re screwed. I smiled wanly and powered on: “Ha … OK, so this will pretty much go as we discussed. We’ve loaded up three pieces of video, each one worse than the other, and after each one …” She stopped me. “That’s too much to remember.”

Hmmm. I paused, now more annoyed than anything. “Uh, not really. It’s actually pretty simple — you show a tape. Get his reaction. Show another. Get his reaction. There are three …” “Yeah, I’m not going to remember all that.” Me, trying not to let my voice break and betray my now very urgent concerns: “Why not?” She started giggling again. “We smoked a little endo before we came here …”

In the rest of the story -- one of the great Letterman recollections published this week -- Kallison tells the story of how he finally got Madonna off the stage, so Counting Crows could make their network debut that night.

The whole piece is here.

And watch the Madonna appearance below.