John Kerry admits defeat: The Ukraine story the media won't tell, and why U.S. retreat is a good thing

The U.S. seems to admit it overplayed its hand over Ukraine. Caving to reality is actually the best possible policy 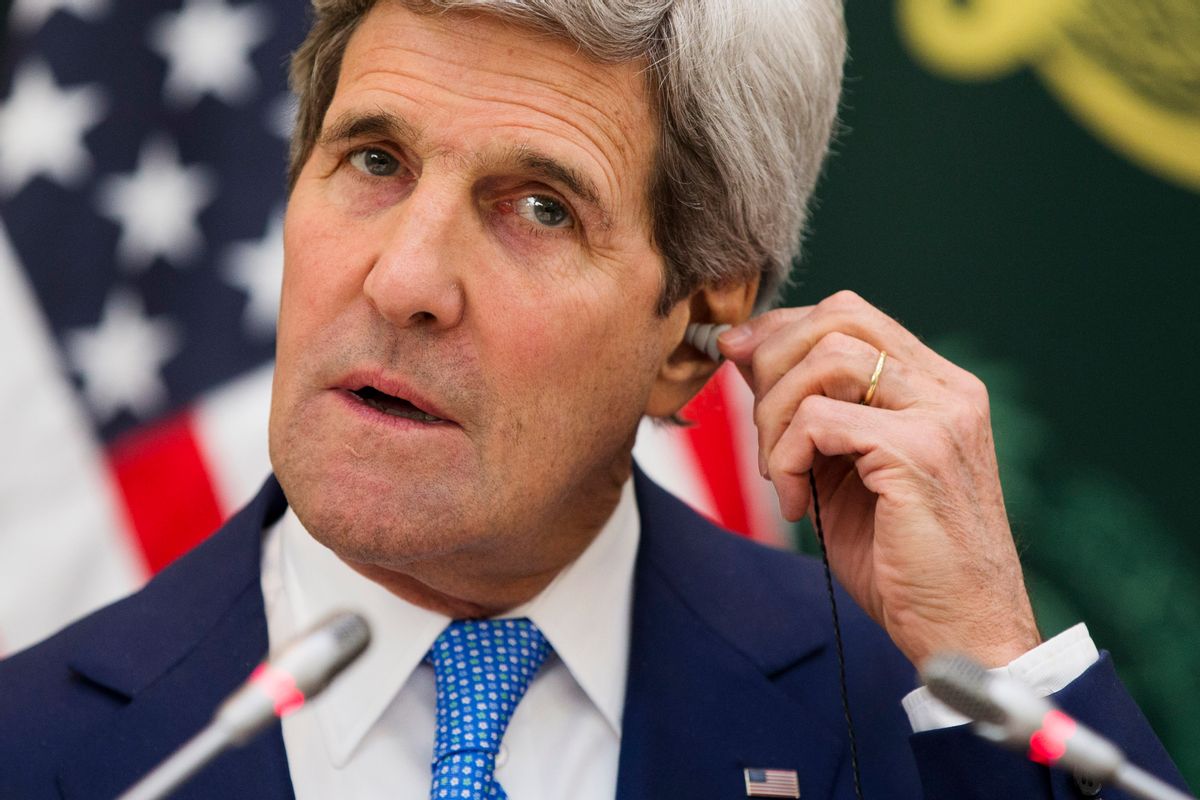 It is just as well Secretary of State John Kerry’s momentous meetings with Russian leaders last week took place in Sochi, the Black Sea resort where President Putin keeps a holiday home. When you have to acknowledge that two years’ worth of pointless hostility in the bilateral relationship has proven none other than pointless, it is best to do so in a far-away place.

Arriving in the morning and leaving in the afternoon, Kerry spent three hours with Sergei Lavrov, Russia’s very competent foreign minister, and then four with Putin. After struggling with the math, these look to me like the most significant seven hours the former senator will spend as this nation’s face abroad.

Who cannot be surprised that the Obama administration, having turned the Ukraine question into the most dangerous showdown since the Cold War’s worst, now declares cordiality, cooperation and common goals the heart of the matter?

The question is not quite as simple as one may think.

On the one hand, the policy cliques’ long swoon into demonization has been scandalously juvenile, and there has been no sign until now of sense to come. Grown men and women advancing the Putin-is-Hitler bit with straight faces. Getting the Poles, paranoids for understandable reasons on all questions to with Russia, to stage ostentatious displays of teenagers in after-school military exercises. American soldiers in those silly berets they affect drilling Ukrainian Beetle Baileys in “war-making functions,” as the officer in charge put it.

When the last of these theatrics got under way in mid-April, it was time for paying-attention people to sit up. As noted in this space, it seemed to indicate that we Americans were prepared to go to war with another nuclear power to rip Ukraine from its past and replant it in the neoliberals’ hothouse of client states—doomed to weakness precisely because corrupt leaders were enticed with baubles to sever their people from history.

On the other hand, it took no genius to see what would eventually come. This column predicted long back—within weeks of the American-cultivated coup that deposed President Yanukovych in February of last year—that the Obama administration would one day be forced to retreat before it all came to resolution.

It was hard then to see how anyone could anticipate any other outcome, and so it has remained. You cannot turn basic miscalculation, indifference to history and diplomatic insensitivity into a winning hand. You turn it into an overplayed hand. And that is what sent Kerry to Sochi last week.

Surprise and no surprise, then.

What does the Sochi visit make Kerry? Is he Neville Chamberlain just back from Munich? The appeasement paranoids are not in evidence yet, which is curious. But the question is interesting nonetheless.

“Now if this sounds familiar, it’s what Hitler did back in the ’30s,” Hillary Clinton said of Putin’s Ukraine policy a month after the Yanukovych coup. Given the corner Clinton has painted herself into, can you wait to hear how she fields questions about Kerry’s new démarche? To hear her explain how she would, if elected, address Putin? I have trouble keeping my seat.

Emphatically, let us forget Clinton’s problems and dismiss any argument that Kerry is an appeaser before one is even made. There is no question of appeasement—a loaded word implying a false equivalence. Kerry is caving to realities, a very different thing.

As I have argued, the best thing American diplomats can do now is admit the failure of our long-expired strategies abroad. Implicitly, at least, Kerry has just done so in one of the most important theaters of American foreign policy. This is a sensible, productive thing to do. When you hit a wall, you can either sit there indefinitely or turn around.

What are these realities Kerry has caved to? I count five, two more than the State Department listed when it outlined Kerry’s agenda in Sochi:

* My sources in Moscow tell me that 80 percent of the exchange concerned the pending deal governing Iran’s nuclear program. Look back: Kerry and Obama have one significant foreign policy success to their credit—the opening to Cuba the exception—and a string of messy failures and successes (the restored dictatorship in Egypt, for instance) that would have been better had they failed.

Look forward: Kerry and Obama, both ambitiously aware of “legacy,” have 18 months to land a big one. It does not get much bigger than rapprochement with Tehran.

Kerry should have come to his senses on Iran long before this. Lavrov has been instrumental in bridging an imposing divide between Iran and the P5 + 1 negotiating group—the U.S., Britain, France, Russia, China and Germany. Most immediately, it was the Russian foreign minister who persuaded Tehran to consider (for a second time) shipping its uranium stockpiles to Russia and re-importing what it needs for peaceful applications. This provision is on the table now and could prove make-or-break as the June 30 deadline for a deal approaches.

More broadly, relations between Russia and (what is now) Iran are 250 years older than the United States and make a complex, on-again-off-again tale. They are very “on” now, and of all P5 + 1 members, Russia holds more keys to the kingdom than any other.

* Same in Syria: A nearby neighbor, longtime relations. Moscow has supported Damascus since the 1940s and signed a non-aggression pact in 1950. Given how evident American impotence in the Syria crisis has become since the bombing campaigns began last September—and how obvious the common cause between Washington and Damascus—Kerry has been saying the unsayable since March: It is time to talk to Assad. And there is no point talking to Assad without talking to Moscow.

Let us not forget that it was Lavrov, once again, who got Obama and Kerry out of a serious political jam in September 2013, a month after the gas attacks in Damascus the administration instantly and implausibly (and wrongly, it soon turned out) assigned to Assad. The “red line” Obama drew brought the U.S. to the eve of airstrikes, Lavrov then persuading Assad to give up his chemical-weapons inventories.

* Ukraine, like Syria, got 10 percent of Kerry’s time in Sochi. I would have thought more, but this is what I am advised by sound Moscow sources. Of all the questions Kerry raised in Sochi, indeed, the new stance on Ukraine amounts to capitulation as well as a request for cooperation.

Readers will recall a rapid-fire sequence of events earlier this year. As the week of February 1 opened, the administration let it be known via a Times story—a straight feed, newspaper as bulletin board—that it was considering arming the Kiev regime. Next day came an announcement that Kerry was traveling to Ukraine, due for meetings Thursday. The topic seemed obvious.

That Wednesday things got interesting. Chancellor Merkel called François Hollande, the French president, and told him to fly to Kiev immediately. Why interesting: These three—Kerry, Merkel and Hollande—were there the same day, talking to the same government, and did not meet. All three then went to Moscow, again separately.

So far as I can make out, all that has occurred since flowed from that week. Merkel, Hollande and Putin convened another round of ceasefire talks with the Ukrainians in Minsk, where the Minsk II agreement was signed on February 11. Short work, which tells us something. Minsk II is fragile but still in effect and remains the basis for a negotiated settlement.

The Americans were excluded from Minsk—point blank, so far as one can make out. And I love the Times sentence on this in Monday’s paper: “Russia, Germany and France previously made it clear that they did not necessarily welcome the Americans at the negotiating table...” It reminds me of Hirohito announcing the surrender on Japanese radio: “The war has not necessarily proceeded to our advantage.”

At the moment described a long-simmering confrontation between the Europeans and Americans was about to boil over. It was the suggestion that American arms might begin to flow into the Ukrainian conflict that prompted Merkel, with Hollande behind her, to tell Washington, “Enough. Cut it out. We are not with you. We settle this at the table, not with missile systems.”

What we saw in Sochi was Kerry’s acceptance that Washington has been trumped in Ukraine: No one else will any longer stand by as Washington agitates for a military solution, no one is on board for ever-heightened confrontation with Moscow and—miss this not—no one else will any longer pretend that the Poroshenko government is other than a new crop of corrupt incompetents.

Where else does an American diplomat go at such a moment but to a Black Sea beach?

* Fourth reality. European Union leaders are due to meet next month to consider whether to renew or drop sanctions against Russia that expire in July. What I get from sources in Europe is that six E.U. members are likely to oppose renewal and that Germany may make seven by the time of the E.U. talks. Since renewal requires a unanimous vote, the outcome seems to be clear.

As noted at the start of this year, Washington’s overly assertive strategy toward Russia risked a breach in one of two relationships: Europe’s with Russia or America’s with Europe. In my view, the increasing risk of trans-Atlantic damage was another factor in Kerry’s travels last week.

* Last but maybe first, in the best outcome the Obama administration has learned the most important lesson available to it in its foreign relations. No need to do any other than quote Stephen F. Cohen, the Russianist interviewed here a few weeks ago.

My reservation about the best outcome is that it is unlikely. To draw lessons from errors you have to acknowledge them, and our policy cliques rarely do, so missing all opportunity to learn from them. Kerry’s démarche has failure written all over it, but, per usual, it is advanced as merely the successful outcome of a successful strategy. This is how you will read of it, I assure you.

More interesting choreography comes our way already. Kerry was in Sochi last Tuesday. The frightening Victoria Nuland, his assistant secretary for European affairs, was in Kiev by Friday. There, and then in Moscow, Nuland was a misleading claim a minute, suggesting, among much else, that she and Kerry were “fully committed to Minsk implementation.”

What a charade. No one other Americans bamboozled by bad media can take this stuff seriously. Not only were Americans kept away from Minsk—not necessarily invited, I should say—but Nuland and her boss vigorously sought to undermine it as soon as it was signed.

Remember Al Haig at the White House after Reagan was shot in 1981? “I’m in charge here!” This is Victoria Nuland bouncing between Kiev and Moscow as we speak. She runs to catch up while claiming to lead, having been left behind by ministers and diplomats with better things to do than provoke confrontation.

We will have to see where this latest turn leads. I credit Kerry. I do not assign him any transcendently imaginative new take on American strategy in the Middle East, in Ukraine, or in Washington’s ties to Moscow. He has acknowledged failure without admitting it. It is force of circumstance, not more. It is not everything, but it could be a lot more than nothing.