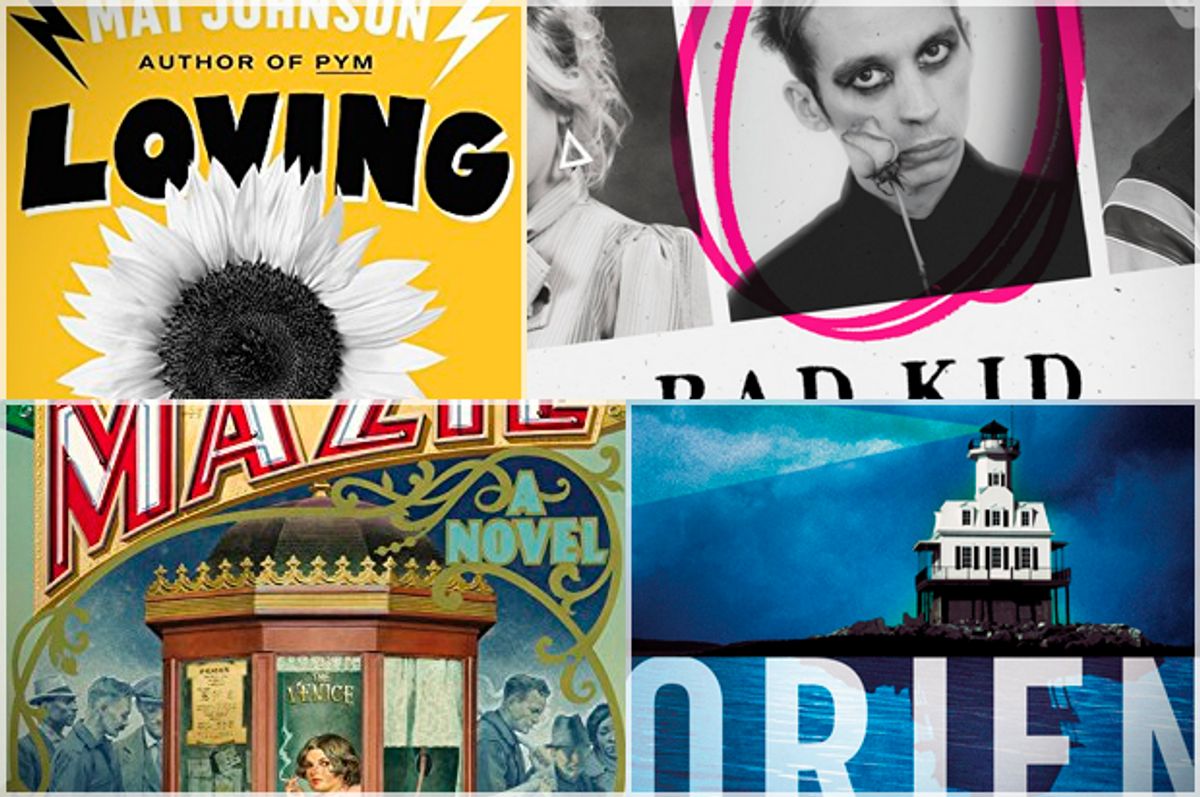 BOLLEN: Strangers versus those you think you know, the art world, a quiet fishing village on the North Fork of Long Island, wanting things, murder, the restlessness of the country at night, ways out.

CRABB: The importance of finding your flock while you're young. The joy of a fog-filled dance floor at midnight. The rejection of shame as a cultural construct. Delinquency. The gift of having parents that love you in spite of not understanding you. Ouija boards, blacklights, clove cigarettes and every Smiths song ever.

JOHNSON: Turning around and charging what you’ve been running from.

MAKKAI: They're stories that ask what the role of art, and the artist, is in a brutal and war-torn world. But that makes it sound deadly serious. One of them's about reality TV, and one's about a woman who coughs up J. S. Bach in her apartment.

POPPER: My wife (not as an author but as a dinner partner), my parents, my work neighbor Peter Eavis.

JOHNSON: Fear. I start with fear. It comes in so many forms. When I write, some of the fear goes away. So I write into the fear, and even more dissipates. I want to be scared while writing. I want to bring it to the surface so I can banish it. Not for long, I realize, but for long enough that even if the experience is not always pleasurable, it’s not miserable. Sometimes, that’s enough.

BOLLEN: Classic murder mysteries, every horror movie I loved and that frightened me as a kid, the New York art world, ideas of east and west, homosexuality, getting older in the city.

MAKKAI: A lot of the stories are informed by my family's history in 1940s Hungary, some more tangentially than others. I wrote one on the floor of an airport while CNN was running nonstop coverage of the Boston Marathon bombing. The story about Bach grew from something a woman told me when I was a teenager, a story about seeing a troll run across the room at a party. I write a lot about artists and intellectuals because my parents were professors, and their friends were musicians and artists and writers, and those are still my people. I worried for years that this would make me sound elitist, but I'm not about to go write some gritty story about life on the streets. I'd be awful at it.

CRABB: Malls of the early ‘90s, the smell of brand-new Doc Marten boots, the dewy morning sprawl of a tract house subdivision at sunrise, Morrissey's hair, bongs made of apples, MTV's “120 Minutes” recorded on a VHS cassette, and every Pet Shop Boys song ever.

ATTENBERG: Diaries, oral histories, my friends, the Tenement Museum, Coney Island, the Lower East Side, the Brooklyn Bridge, the Catholic nursing home I worked in during the late ‘90s, and the last remaining cobblestone streets of New York City.

CRABB: Turning 40, rediscovering vinyl records, struggling through physical therapy after shoulder surgery, getting engaged, becoming a total geek over high-end pour-over coffee, establishing a decent hashtag and online identity for my Jack Russell/Chihuahua Charlie, and re-obsessing over every Erasure song ever.

JOHNSON: I figured out I wasn’t who I thought I was, or who I feared I was. I continued to grow into my role as parent, and as an adult. I gave up some long-held notions about myself and felt the lighter for it.

BOLLEN: An intense fear of failure, my day job at Interview, a cigarette addiction, enough time to work, a good idea, a view of a fire escape partially hidden by metal blinds.

ATTENBERG: An extended book tour, falling in love with New Orleans, paying off my credit card debt, adopting a dog.

POPPER: Freedom, sunshine, traveling, feeling guilty about being absent, believing it was almost done and then finding out it was not, trying to figure out a way to deal with anxiety, working to focus more on kindness.

JOHNSON: Confusing. “WTF.” Etc. I mean, yo, this stuff is hard to write. And the goal is to entertain, but also a chance to do more than that. This takes not just me, the writer, reaching, but you, the reader. So you can work with me. You can risk being unsettled.

BOLLEN: “Could have been 100 pages shorter” or “this expansive novel falls a bit flat when all’s said and done.”

POPPER: I wish I had enough reviews and readers to know.

MAKKAI: Someone on Amazon is already going off about how these are "MFA stories," which is funny because I don't have an MFA. People want my novel characters to be better people, to make better choices. I get "unpleasant" and "selfish" and "mean" a lot. Sometimes I think I should write about nuns and fluffy bunnies, but then I never do.

CRABB: "Cringe." It's a negative word, but so far it's been used repeatedly in the most complimentary way to describe that awkward teenage place of naiveté and desperation. It was important to me that the book didn't comment on being a teenager, but felt instead like a story told by a teenager. So that word—"cringe"—makes me very happy, happier than listening nonstop to every Cure song ever.

BOLLEN: I have always wanted to be either a cinematographer or a veterinarian. Recently (and never before recently) the idea of law school vaguely appeals to me.

MAKKAI: Part of me has always been a little sad that I didn't throw myself into acting the same way I threw myself into writing. But then I'd have had to get a nose job, and I'm really not up for that.

CRABB: Probably a performer, but I already do that. So maybe run an animal rescue and rehab center. Or at least work in a field in which I get to regularly pet and fawn over dogs. I enjoy assigning them character voices and figuring out which bands they like and loathe. My dog likes every Violent Femmes song ever.

ATTENBERG: Social media for an animal shelter. So, you know, taking pictures of puppies and finding them homes.

JOHNSON: Long-haul trucking. Just roaming the country, alone, with audiobooks and podcasts, sleeping in the back of the cab, showering at gas stations at 4 a.m., minimal human contact. That’s living the dream.

CRABB: I think I excel at dialogue and place. Years of live storytelling and character acting have helped me with building vivid locations and scenes. I love creating individual short stories within chapters, but I want to get better at building consistent narratives from start to finish. I'd also like to find a creative way to write a book that incorporates every Depeche Mode song ever.

POPPER: I think I know how to get to the nubs of problems rather quickly and I can figure out different ways of writing up the same scene. I wish I understood and remembered the cadences and unique variations of human speech.

BOLLEN: My strength is character. I’m pretty good at building walking-talking humans with brains like beehives. I also feel that I’m solid at description. What I need to learn is how to move at a faster clip—and just get on with things.

MAKKAI: I'm confident with dialogue, and with humor. I always have to stop and force myself to describe people and places, though. I forget that you can't already see what I see.

JOHNSON: I’ve been writing forever, 20 years. At this point I’m so far down the rabbit hole that most of the things I suck at don’t even have a name. My strong suit is that I’ve been willing to risk on the page to get somewhere interesting. My weak suit is whatever each reader hates about each book.

MAKKAI: It's funny—in real life I talk very fast, and I think the reason is that I'm subconsciously worried that no one wants to listen to me, that I'm eating up someone else's airtime, and I need to finish as soon as possible. (And yet this doesn't stop me from talking, a lot. It used to. I don't think I spoke more than five sentences my first year of high school.) But writing ... I don't know, it's different. I've had an unusual life, and I have strange thoughts. I like to think that's worth something.

POPPER: I read my writing through my own eyes, those of someone who finds way too little of life interesting and I see if I get bored. If that gets too discouraging I just tell myself to do my job and leave the existential questions for once it is done.

BOLLEN: It’s never hubris to write. But it is a little out of touch to presume that someone wants to follow your every observation and insight over the course of hundreds of pages without any sort of payoff. That’s why writing isn’t a one-way street. You have to give something back: an interesting plot, a surprise, a laugh, a moment of tenderness, a mystery for the reader to piece together. Is it so awful to design a sleek, comfortable car for your passengers while pointing out the way the light dances across the scenery? It can be any kind of vehicle you want, as long as it runs.

CRABB: I think making any art requires a certain degree of high anxiety and total abandon. You have to feel wildly insecure while also thinking, as my Texan elders say, that "your sh*t don't stank." That simultaneous hubris/doubt has kept me making art for a couple decades now. I hope keeps me going for a few more.

JOHNSON: Oh, in lit fiction, it’s really a minuscule amount of people compared to the other major storytelling forms, television and film. So it doesn’t feel like hubris. More stubbornness.

ATTENBERG: Listen, I don’t pretend for a second that I’m that great of a person on a day-to-day basis. I’m a deeply flawed human. But the very best parts of me go into my writing, it is the best version of myself, and I don’t think it’s hubristic to believe that that’s worth something, worth someone else’s time. It’s the most I have to offer the world.