Rape in Westeros: What "Game of Thrones" could learn from "Mad Max: Fury Road" 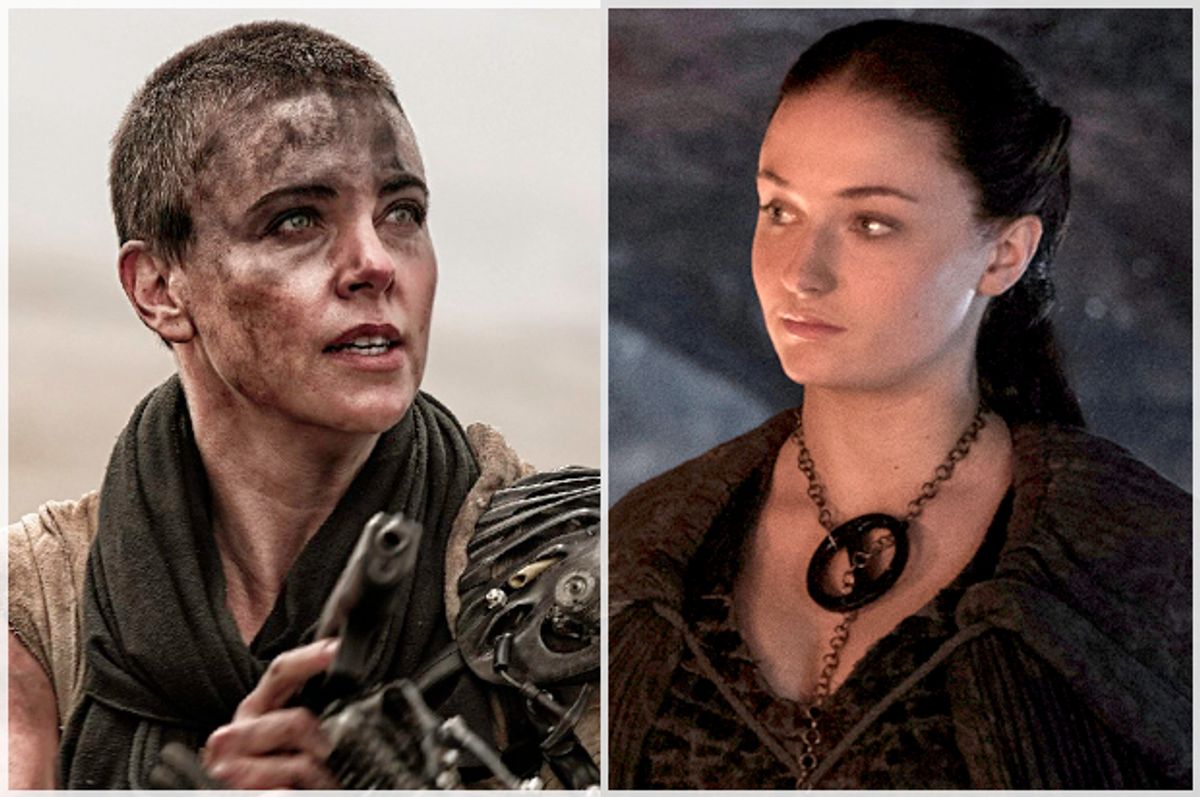 I am experiencing some déjà vu.

Just over a year ago I wrote a piece on HBO’s “Game Of Thrones” questioning why the show’s creators had written a rape scene into the show’s season-four episode “Breaker Of Chains.” That episode was notable for re-telling a scene from the book with a lot more brutality, meaning critics like myself could compare the source material and the scene in question, side-by-side. It led me to return to the pilot of “Game Of Thrones,” to examine another scene that played out very differently in the book than it did in the show. Neither sex scene, in the books, is wholly consensual, but on-screen, they are significantly less so. In the pilot, Daenerys (Emilia Clarke) is forcibly penetrated by Khal Drogo (Jason Momoa) on their wedding night; in “Breaker Of Chains,” Jamie (Nikolaj Walder-Costeau) pushes his sister/lover to the ground and rapes her. In the show, both Dany and Cersei (Lena Headey) sob through their ordeals.

Now these two sobbing women are joined by a third. Last night, Sansa Stark (Sophie Turner) was similarly assaulted by her new husband, Ramsay Bolton (Iwan Rheon), while her former foster brother Theon (Alfie Allen) was forced to watch. Unlike the first two scenes, Sansa’s storyline can’t really be compared to what happens in the books: She’s been combined with another minor character from “A Dance With Dragons” named Jeyne Poole. Jeyne is pushed to impersonate Arya Stark and marry Ramsay by none other than Tywin Lannister, who is now dead. Ramsay forces Theon to perform sex acts on Jeyne, regularly abuses her, and threatens to have her fornicate with a dog, including, presumably, many more mundane acts of sexual assault on a regular basis. Crucially, perhaps, for this topic, “A Dance With Dragons” stops short of narrating Ramsay’s rape of Jeyne.

“Unbowed, Unbent, Unbroken” offers no such restraint. The essential nature of the story remains the same—Ramsay is a sadist, Theon is trapped in Ramsay’s thrall, and both Jeyne and Sansa are at Ramsay’s mercy. But the depiction is very different. Rather than depicting both Theon and Jeyne being victimized, together, “Game Of Thrones” depicts Ramsay raping Sansa, while Theon watches. The camera stays on his face. All we hear of her is sobbing, as his face contorts in horror.

As I wrote in April, this is not a turn of events that is totally unexpected.

On the eve of her engagement to Ramsay Bolton—even if, as her serving woman tells her, “the North remembers,” even if the man that was once Theon is waiting in the wings, even if Littlefinger is watching her back—Sansa is now facing a life where she will be raped, daily. It’s a choice, of sorts, made between one bleak prospect and another. We, the audience, do not know exactly what she is thinking. But I would not be surprised to hear her echo Elizabeth Smart, as she rejects the notion of Stockholm syndrome. “Everything I did I did to survive.”

But. I wrote that as a way of articulating what I believe to be true about Sansa (and Jeyne Poole, for that matter): These women are not merely victims: They are survivors in a world that is built to be inhospitable to them. The idea that they are victims makes them passive in their own lives, and what we see from both Sansa and Jeyne are their struggles to make themselves heard, even while under the worst kind of torture.

The problem with the graphic brutality of last night’s scene is not, necessarily, that it is rape. One only needs to glance at the news to find stories of unconscionable sexual abuse directed towards young women; in the world of TV, Jane Campion’s “Top Of The Lake” is a haunting, beautiful miniseries about a spate of rapes in a small town that focuses with unrelenting empathy on the shape and aftermath of trauma. At its best, Westeros is a way to comment on the cheaply held respect for women’s bodies in our own world.

But the scene in “Unbowed, Unbent, Unbroken,” undercuts Sansa’s agency in what is happening to her. She is a player in this game of thrones, as evidenced by her icy grace as she walks to the godswood, accompanied by no one except the foster-brother who betrayed her family; to her regal put-down of the besotted servant girl who tries to scare her out of marrying Ramsay. She’s had a devil’s choice, between one kind of hell and another, but she did choose. When Ramsay orders her to undress, she begins to do so. Her fear gets the best of her for a minute. But then when Ramsay rips open her dress, though she’s terrified, she doesn’t resist. She is maintaining her own composure; she is owning her own dreadful choice, insofar as anything she can do in this terrible situation is a choice. But then the scene stops depicting her. Her sobs become the score for someone else’s story. The episode loses sight, literally, of who she is; furthermore, and more damning, it seems to take from her, in this most vulnerable moment, the only thing that she truly has.

My guess is that the show’s creators were attempting to salvage some of Sansa’s dignity—or, more cynically, their own; they’ve heard a lot from viewers about gratuitous female nudity and/or torture porn. (I noticed the actors involved were already prepared, Monday morning, to make the publicity rounds defending the scene.) But they mis-stepped again; focusing on Theon in that crucial moment stripped Sansa of even more of her dignity. Perhaps I seem like an unfair critic, arguing that this scene didn’t do it right, and that scene didn’t either. But rape isn’t a simple or easy topic; it should be really goddamn hard to get right on screen.

And while the scene itself is important to discuss, one of the most damning things about “Game Of Thrones,” up until now, is how little it has acknowledged or processed the many rapes that have occurred in its world. The scene between Jaime and Cersei was never discussed again, and Dany goes on to fall in love with Khal Drogo. Partly, as I’ve discussed before, this comes from the show’s vested interest in shocking and titillating its largely first-world audience with a level of body horror and violence that is presently experienced almost entirely by the neediest populations on the planet—populations that can’t afford HBO. Partly, it also seems to be a real miscomprehension of sexual assault suffered by women in a patriarchal world. Myles McNutt put it well:

The issue with the show returning to rape as a trope is not simply because there have been thinkpieces speaking out against it, and is not solely driven by the rational concerns lying at the heart of those thinkpieces. It’s also that the show has lost my faith as a viewer that the writers know how to articulate the aftermath of this rape effectively within the limited time offered to each storyline in a given episode and given season. Three of the show’s main female characters have now been raped, and yet the show has struggled to make this a part of their character history—their rapes may function as narrative climaxes, but the rising action has never been particularly well-drawn, and the denouement has been non-existent.

Whether it is Stockholm Syndrome or “Game Of Thrones,” it appears that our culture will go out of its way—well, well out of its way—to ignore or sideline the story of women dealing with rape on their own terms. It remains to be seen how “Game Of Thrones” is going to handle this in the episodes remaining this season. Fortunately for Weiss and Benioff, though, they can look to the undeniably testosterone-fueled “Mad Max: Fury Road,” which just premiered on Friday, for some pointers on how to write about women as agents of their own fate in a man’s world.

The film—brainchild of writer/director George Miller—is about a group of women struggling to escape from a male slaver and his many (male) followers. Most are “breeders,” his sex slaves that he is using to beget children. Other women slaves are chained to milking machines, supplying breast milk for the starving soldiers. And one is a maimed driver and fighter, who is the one attempting to lead the other women to freedom, with untold horrors in her past. And yet, as novelist Saladin Ahmed observed, despite the film’s R-rating, sex slavery, visibly pregnant “breeder,” and any amount of blood and gore, “Mad Max: Fury Road” does not feature a rape scene. The film is a vision of fighting oppression, a battle epic of overcoming the odds. Rape happened in this world, yes. But there is no reason to depict it in the film.

The problem, as ever, with “Game Of Thrones”’ rape is not that it exists but that it fails to adequately justify why it exists. Miller's film has incredible vision and purpose and energy. Every moment is considered and vital. "Game Of Thrones" doesn't feel that way. A world of violence is not a narrative, it’s just a theater of horror. There is a real disconnect in this show between the character arcs and the brutality of each moment; between the subtle storytelling and the entirely unsubtle treatment of its women. It creates a dissonance of attempting to identify with characters before seeing them suffer almost cartoonish horror in the arena of the show; the violence is titillation.

But rape isn’t mere violence; it’s not a punch to the head or a knife through the ribs. It’s an act that attempts to divorce a person’s soul from their body; to imitate the language of intimacy in what is purely cruelty. It is a kind of murder, except afterwards, the victim can still walk and talk and breathe. I question any depiction of rape that seeks to add to a woman’s violation in the text by further robbing her of her dignity in how that story is told. And at this point, with HBO's "Game Of Thrones," I'm questioning three.