The most sexist and degrading "Bachelorette" to date: This season is definitely not here for the right reasons

Who's going to win? Misogyny! 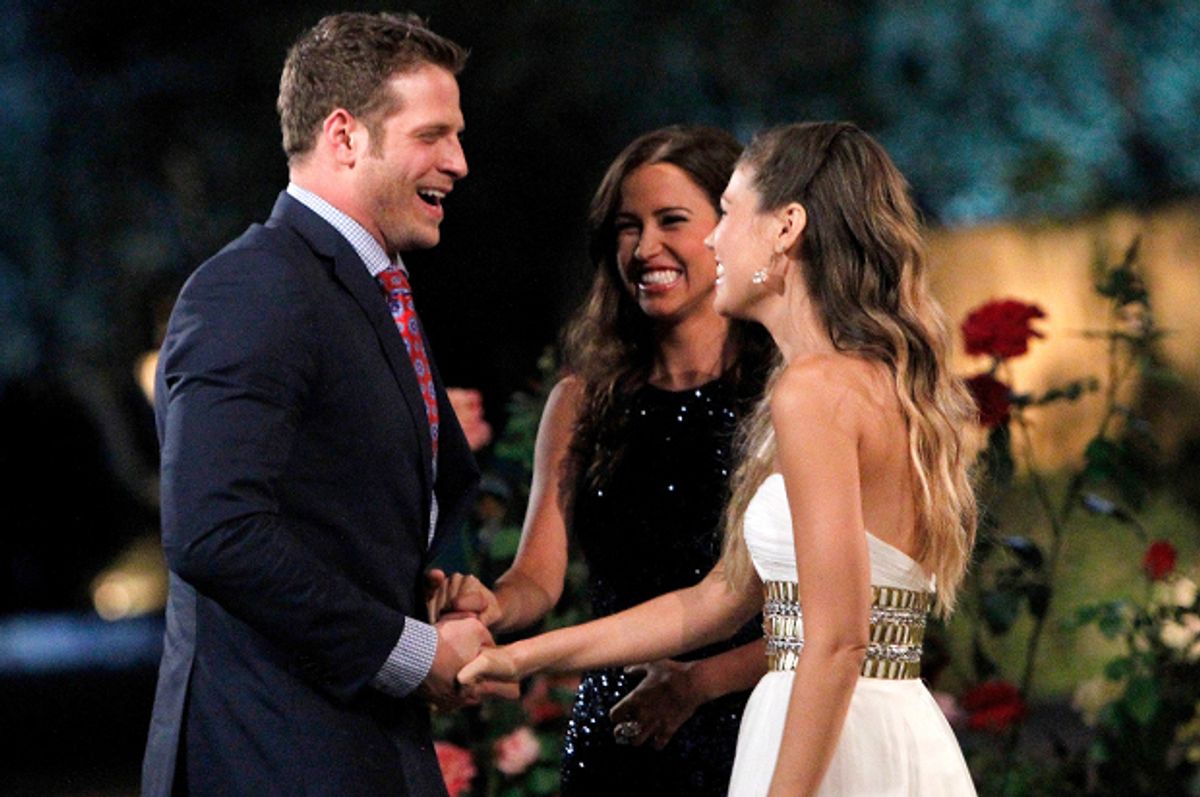 When the big twist for season 11 of "The Bachelorette" was revealed -- that the male contestants would have to choose between two potential Bachelorettes, Kaitlyn Bristowe and Britt Nilsson -- people were not exactly thrilled with the decision.

Female viewers endure “The Bachelor’s” latent misogyny with the heartening knowledge that a season of “The Bachelorette” is on its way: That there will be a time for the woman to hold the cards while the men vie for her approval. Yet, as Bachelor Nation’s benevolent dictator Chris Harrison explained, this season would be different — on the first night, the men would have the power to decide which of the two women would proceed as Bachelorette. As our own Tracy Clark-Flory wrote at the time, summing up the mood: “What viewers saw was an enraging power imbalance in the wake of a season that, even more so than average, revolved around women fighting over a man …That power imbalance [in which the men have all the power] has always been there, right under the surface, but with this move 'The Bachelor' made it un-ignorable, even to the most blissfully ignorant or in denial."

But since I clearly have a taste for masochism, I decided to tune in for the big showdown, and hoo boy am I glad that I did. Last night's premiere managed to be more degrading, misogynistic and downright cruel than even its most fervent critics had predicted. Congratulations, Chris Harrison! A bucket of roses to you and the whole “Bachelorette” team for managing to turn an already-sexist franchise into something somehow even more disheartening than the 11 seasons that came before it (Outkast was right: Roses really smell like poo-oo).

From the moment the show began, the newly debasing nature of the contest was apparent. If we had any doubt who the "twist" served to benefit, Harrison summed things up for us pretty nicely, explaining that "Since the feelings [about who should be Bachelorette] were so strongly split, it seemed unfair to make that decision for the men." Yeah, that would be unfair! You know what else is unfair? Everything else about this arrangement.

For example: Usually, the Bachelor and Bachelorette get long, detailed introductions where we get to know our protagonist for the season (remember how many shots of rolling Iowa cornfields we had to endure last season?). Britt and Kaitlyn, meanwhile, were pictured purely in the context of how they behaved on the show — no shots of them in their hometowns, no opportunities to express themselves in their own words — but with reductive descriptors designed to play up an an artificial divide between them. There is the Canadian dancer Kaitlyn, who is “funny, sexy and sometimes completely inappropriate” (cut to a shot of her stripping off her bikini bottoms) verses the California model Britt, who is “sincere, emotional, and very loving” (cut to a shot of her crying).

This show has long favored the White Swan and Black Swan dichotomy, as New York Magazine’s Jada Yuan wrote back during "Bachelor" season 11. And this false dichotomy between the two women was extra pronounced here, down to the outfit choices: Kaitlyn was put in something tight, black and sparkly, while Britt was essentially in a wedding gown. There are only two kinds of women in Bachelor/ette Nation -- or so the show implies -- and its up to the men to choose which they’d rather bed and wed. As one contestant put it, “Britt is more of your trophy wife. Kaitlyn is more of your wife, your natural wife.” Oh, got it.

What’s even worse is that, for all the playing up of how different they are, the women are ultimately interchangeable in the world of the show. Generally, contestants come on the show because they are attracted to the specific attributes of the Bachelor or Bachelorette as revealed on the previous season — hey, I really want to move to Iowa and marry this farmer! — and want a shot at meeting them (or, you know, 15 minutes of fame, which is an equally valid motivation in "Bachelor/ette" world). But the way it’s set up, the men who were on Team Britt (yes, they refer to the women by teams, as if the men-competing-for-a-trophy metaphor wasn’t obvious enough) will still presumably have to compete on the show if Kaitlyn is ultimately chosen. The whole notion of the show's true romance quest is artificial, but the twist makes it ever more so, as the women become even more like pawns to be played in a complex strategy game. As one of the men put it “Do you pick the woman you like most or the one you think likes you the most?”

The whole mood of the evening was pretty bleak and depressing throughout. There were the introductions, where the men exited the limo and had to choose which woman to greet first, in earshot of the other. By virtue of strategic limo-seating and editing, each woman took turns being made to feel like second fiddle, as the men came out, blatantly favored one or the other, and then weighed in to the cameras on which of the two they preferred. As Kaitlyn says, bleakly: "If I see a guy get out of that limo and I’m, like ‘Whoa!’ and he goes over to Britt — I’m a human. I'm going to have feelings of ‘Well, hey guys…'”

Unlike Kaitlyn, I don’t want to pay too much attention to the guys, because they seem like a bunch of duds, but let's just say it seems a bit unfair -- that word again! -- that Shawn E., an “amateur” sex coach from Ontario, Josh, a 27-year-old law student slash exotic dancer, and a guy who rode in on a motorized cupcake, get to choose which of these women is better "wife material" based on a lengthy cocktail party.

Both girls, but particularly Kaitlyn, looked miserable throughout, despite obviously being encouraged by producers to keep their chins up. As Kaitlyn put it, “It’s just going to be very awkward and uncomfortable being compared to somebody, and guys are supposed to choose. That doesn’t sit well with me,” before qualifying that she is "so grateful and I appreciate that I’m even here.” Even smiley Britt found the process was getting to her -- after all, they both went through the embarrassing spectacle of televised rejection just a few months ago -- confessing that “it’s so weird to be playing the waiting game again and wanting validation again.” Thankfully Chris Harrison was on hand with friendly reminders of their second-class status, in case they forgot. As he put it, “Obviously, you two are here hopeful for love But the men will have a little bit of power tonight and a little bit of say in what’s going to happen.”

The evening culminated with the men putting their ballots (roses, naturally) in locked wooden voting boxes labeled with the girls' names, before the episode ended, of course, on a cliffhanger. And while I’ll obviously be tuning in for the big reveal tonight, I do so without the giddy excitement that the show and its attendant spectacle usually provides. The show has always been about making snap judgments based on first impressions (impressions that usually turn out to be wrong, judging from the show's high divorce rate). Yet never before has the blatantly sexist foundation of the show been laid so bare. "The Bachelor" finale, where the Bachelor must choose between two women, is always pretty gross, but at least he has had a whole six weeks to get to know them, to take them on dates and visit their hometowns and establish whether they might be compatible. Here, a bunch of men literally have one evening to choose which of two women's boxes they would rather put their "rose" in (oh, and to have and to hold from this day forward, in sickness and health, until death do they part, obviously). As Britt says: "I almost feel like I have to go and in 30 seconds prove myself as wife material... It's bizarre."

I forgot to mention that there was a little drama in the house, courtesy of a contestant named Ryan M. who proceeded to get blackout drunk, harass the other contestants (which included spouting the bizarre line "Why am I not raping you right now?”) and then slap Kaitlyn on the ass. Chris Harrison quickly booted him out, chastising him for being "here for the wrong reasons." Yet while Ryan may be "The Bachelorette’s" foul id, openly saying and doing the rape culture-y things that make us squirm, his behavior is less an outlier than a logical extension of a world where men pick a team and compete to win their trophy. And that might be the most disappointing part of it all.