Lay off Miley Cyrus and Taylor Swift: We're so unfair to women growing up in the public eye

Miley's 22, she's supposed to be wild -- and plenty of women Swift's age are still figuring their feminism out 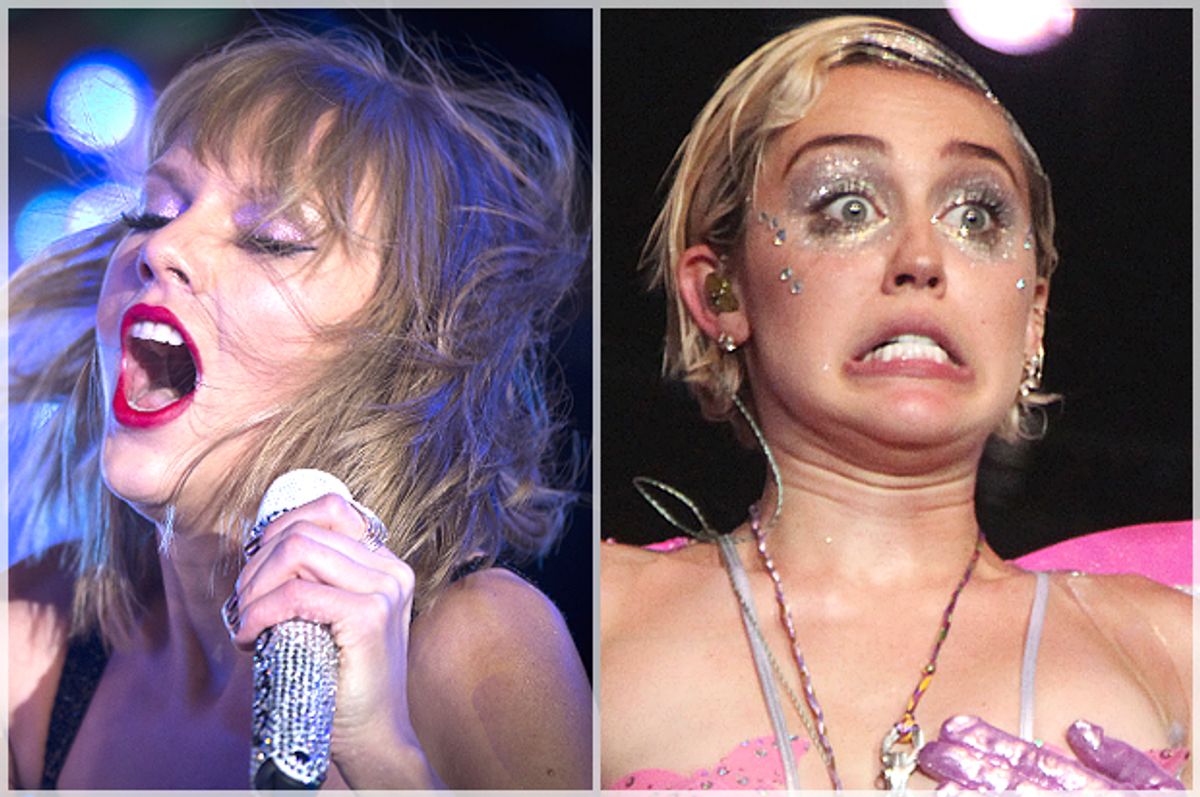 In recent weeks, Miley Cyrus has released a series of low-key performance videos dubbed the Backyard Sessions. In one, she and Ariana Grande--sporting a unicorn and a mouse onesie, respectively--warble through a rendition of Crowded House's "Don't Dream It's Over." In another, she and folk legend Melanie duet on the chestnut  "Look What They've Done to My Song, Ma." In still another, she, Joan Jett and Against Me!'s Laura Jane Grace cover the Replacements' "Androgynous." Still others feature Cyrus crooning like a country-blues superstar through a rendition of the Turtles' "Happy Together" and channeling her inner lounge singer on a smoldering version of Paul Simon's "50 Ways to Leave Your Lover."

These sessions have served as a way to raise awareness for her nonprofit Happy Hippie Foundation, whose mission is to provide support and funding for homeless youth and LGBT youth, and to encourage young people to take action to combat these societal injustices. Cyrus' involvement in this foundation is hardly token: She's penned Op-Eds about why she's passionate about Happy Hippie and even became personally involved when a high-schooler received flak for wearing a "Legalize Gay" T-shirt. As an added bonus, these videos have also been a stark reminder of her talents as a vocalist, a fact often obscured by her controversial propensity for twerking and alleged cultural appropriation, a penchant for wearing clothing some find too risque or her general bent toward provocation--such as when she memorably prefaced her Rock & Roll Hall of Fame induction speech for Jett by saying, "I'm going to start off this induction with the first time I wanted to have sex with Joan Jett."

Cyrus has been a professional performer since she was a tween, so it's easy to forget that she's only 22. Nothing she's doing--including her perceived missteps--is out of the ordinary for a woman her age; in fact, her ability to shape-shift between being an agent of rebellion and a sincere philanthropic proponent is perfectly unremarkable. It's because she's in the public eye that her actions receive heightened attention and scrutiny. Certainly this is true of all pop stars, no matter what gender they identify with; it's a byproduct of society's obsession with fame and glamour. But female artists in general seem to receive far more criticism for complexity, for refusing to be boxed into an easy-to-understand trope. There's not really a "Manic Pixie Dream Girl" analog in music, but there's plenty of condescending pigeonholing to go around.

Jessica Hopper's excellent Spin feature on Lana Del Rey (which also appears in her new book, "The First Collection of Criticism by a Living Female Rock Critic”) obliterates the myth that the musician is a record label puppet or somehow a pop Frankenstein, as if her retro aesthetic, enigmatic poses and name change somehow made her a fake. Elsewhere, it's always open season on Taylor Swift's love life--whether she's single or rumored to be with someone--even though, at age 25, she's not weird for dating around or making suspect relationship decisions. And while her new "Bad Blood" video is heavily rumored to be an elaborate, sci-fi-laced diss of Katy Perry, a feud between friendly rivals--you might even say frenemies--is a firmly embedded part of girl code, for better and for worse. Petty disagreements blown up into years-long cold wars is a plague on female friendships of all ages.

However, angling to pit female artists against each other--whether this positioning is based in reality or not--is just as pernicious. It sends the message that there isn't room for more than one successful woman at the top of the pop charts--that it has to be, say, Tiffany or Debbie Gibson, Britney or Christina, Gaga or Katy Perry. (In the '90s, replace with Whitney vs. Celine vs. Mariah.) Elevating minor personal disagreements to code red status happens in rock circles too--think Courtney Love vs. Dave Grohl--but it's particularly prevalent in the pop world. Emphasizing such spats reinforces the stereotype that women are hysterical or dramatic, and plays into the tired idea that strong women are difficult.

Swift's video is very much trying to combat (if not toy with) this misconception, even if its execution is also problematic. Puja Patel's recent Deadspin piece makes excellent points about its shortcomings: "The troubling, underlying takeaway from this video is that Swift wants her fans to know that she’s the most important of all the important kids and that she’s become somewhat untouchable as a result. And that’s the worst kind of way to tout your championing of women (and celebrity hashtag-feminism)—to wrap it up in a blanket of cool and use it as a weapon!"

Still, this Deadspin piece is less forgiving of Swift's recent outspoken feminist stance: "It’s important to take a second to remember that her brand of feminism is deceptive in its inclusiveness; it’s frequently for show, or worse, only for Instagram." Swift has said this feminist stance has crystallized thanks to her friendship with Lena Dunham, and while her own assessment of feminism still isn't necessarily sophisticated—"So to me, feminism is probably the most important movement that you could embrace, because it’s just basically another word for equality," Swift said in a recent Maxim article—it's not quite fair to discredit it entirely.

Again, Swift herself is just 25, and has been cultivating a demanding career for over a decade now. It's hard to blame her for being a late bloomer to an extremely complex, nuanced and (ultimately) very personal movement: Not only has she been privileged enough to grow into a global superstar, but her massive fame has also sheltered her from the realities of what many women face. That she's talking about it at all is a step in the right direction—even in 2015, it's courageous to talk about feminism, as if it's still something of a dirty word. It was revolutionary to many in the '90s when Kurt Cobain spoke out about feminism; that a person of Swift's stature is also bringing it up is a positive step. More than ever, she's figuring things out as she goes along, just like plenty of other women her age.

If anything, her assertions are raising awareness of something to which many of her fans may not have been exposed, or bringing up feelings still others might be trying to figure out for themselves. In this sense, Swift is paving the way for the younger generation, who are creating their own narrative and dictating what kind of artist they want to be—pushing back against rampant misogyny and sexism by being vocal about their own strengths. Lorde recently tweeted "hey, men — do me and yourselves a favour, and don't underestimate my skill" followed by "yes, i'm a young lass, but i'm also making the best decisions for me each day. #stayeducated."

Cyrus as well is extremely self-aware about how she's viewed, and focused on her own career vision. Speaking to Rolling Stone in 2013 about the criticism that she's "playing black" or using "black backup dancers as props," she responded, "I'm from one of the wealthiest counties in America. I know what I am. But I also know what I like to listen to. Look at any 20-year-old white girl right now – that's what they're listening to at the club. It's 2013. The gays are getting married, we're all collaborating. I would never think about the color of my dancers, like, 'Ooh, that might be controversial.' ...Times are changing. I think there's a generation or two left, and then it's gonna be a whole new world." With such savvy women driving the pop narrative, perhaps the future is closer than we think.