The 10 best Letterman guest farewells: "I say in truth, I love you"

The past few weeks have left Dave's guests feeling sentimental 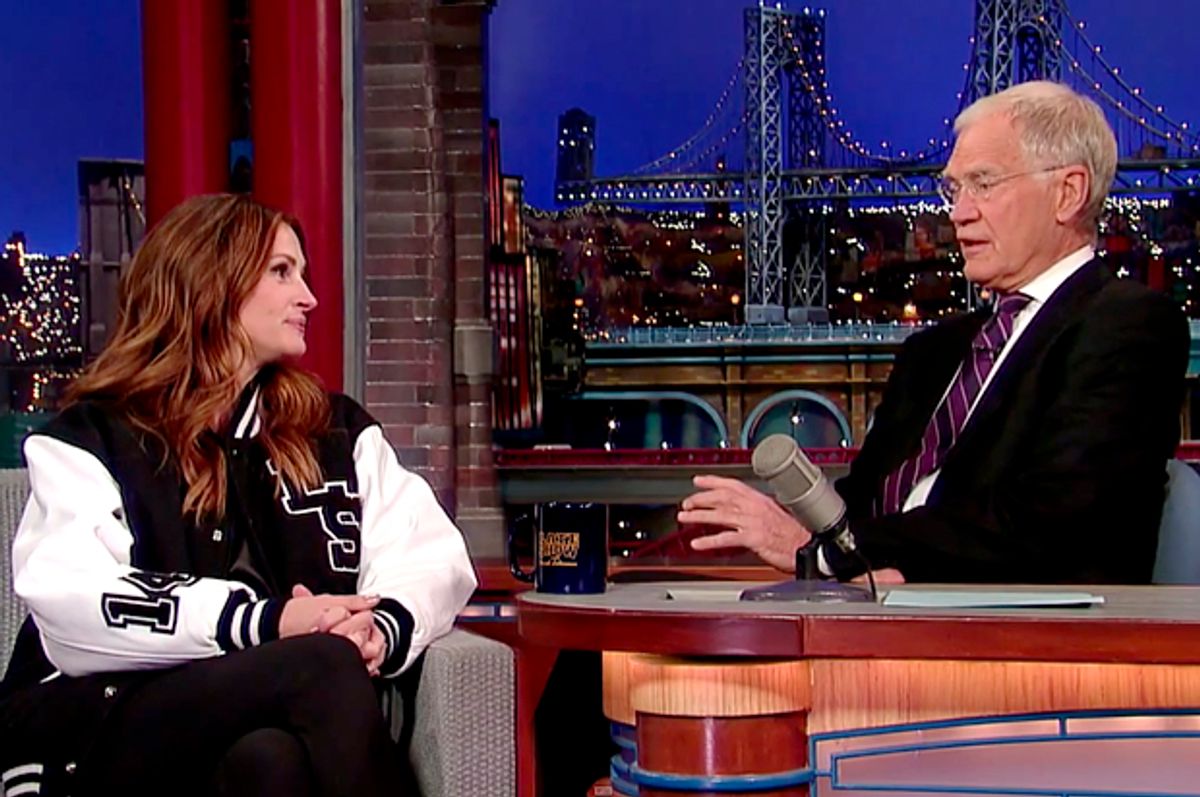 Letterman is leaving us for good tonight, but the fanfare around his departure has been building up for weeks, with many of Letterman’s favorite guests returning to the show to offer final send-offs to the late night legend. Here are the ten best tributes so far (we’ve excluded tributes from musical guests, although naturally many of these are quite musical).

10. Will Ferrell surprised Dave by showing up in the audience in full Harry Caray regalia. We never get sick of Ferrell's impression of the disheveled Cubs announcer, and the look of childlike delight on Letterman's face suggests he feels the same way.

9. And Ferrell wasn’t the only "SNL" alum who reprised an old persona; Adam Sandler reminded us of his younger, funnier self in this surprisingly sweet song (which might be the greatest tribute of all!)

8. Tina Fey's farewell, in which she stripped off her dress (because she’s done conforming to "gender norms out of respect”) to reveal a leotard that said “Bye Dave!” was quintessentially Tina and totally charming, with a nice little feminist jab thrown in to boot.

7. Taking the opposite tack to Tina, Julia Roberts bade Letterman off with a quasi-tender, quasi-creepy kiss -— the perfect send-off to a decades-long onscreen love story.

6. Many of the farewells were inflected with the weight of the show's history; Cher, for example, called back to the infamous 1986 appearance where she called Dave an asshole, by showing up to call him an asshole again (although with much more tenderness this time around).

5. There were a lot of Broadway-esque original musical performances for Letterman over the past few weeks: Billy Crystal’s was somber, Nathan Lane's was dark, but Marty Short’s jubilant funeral ode was probably our favorite.

4. Amid all the musical earnestness, Steve Martin's dry “This are your life” segments were a fittingly ironic tribute to a man who rarely let sentiment get in the way of a good laugh.

3. Bill Murray is one of Dave's most beloved guests; He has appeared on the show countless times and always something new and bizarre up his sleeve. And last night, when he jumped out of a cake and proceeded to cover the esteemed Late Show host in icing, was a fittingly wacky sendoff for one of Late Night's best TV duos.

2. Of all Letterman's guests, it's the stand-up comics who followed in his footsteps that seem to be taking it the hardest. Ray Romano had us reaching for the kleenexes with this tearful story about how Dave changed his life by helping him to get "Everybody Loves Raymond," referencing "American Pie" as he labeled Dave's departure "The day the comedy died."

1. Like Romano, Norm Macdonald worships Letterman, and he very sweetly professed his love by doing one of Dave's old jokes and uttering the line "“Mr. Letterman is not for the mawkish, and he has no truck for the sentimental. If something is true it’s not sentimental. And I say in truth, I love you.” Of all the tributes, this -- from the famously dry and ironic Norm -- might be the most emotional of the bunch. Aw, Norm!