The Flash vs. Daredevil: Who's the best new superhero on TV?

Who would win in a fight? Hard to say, but here's how their excellent rookie show seasons fared against each other 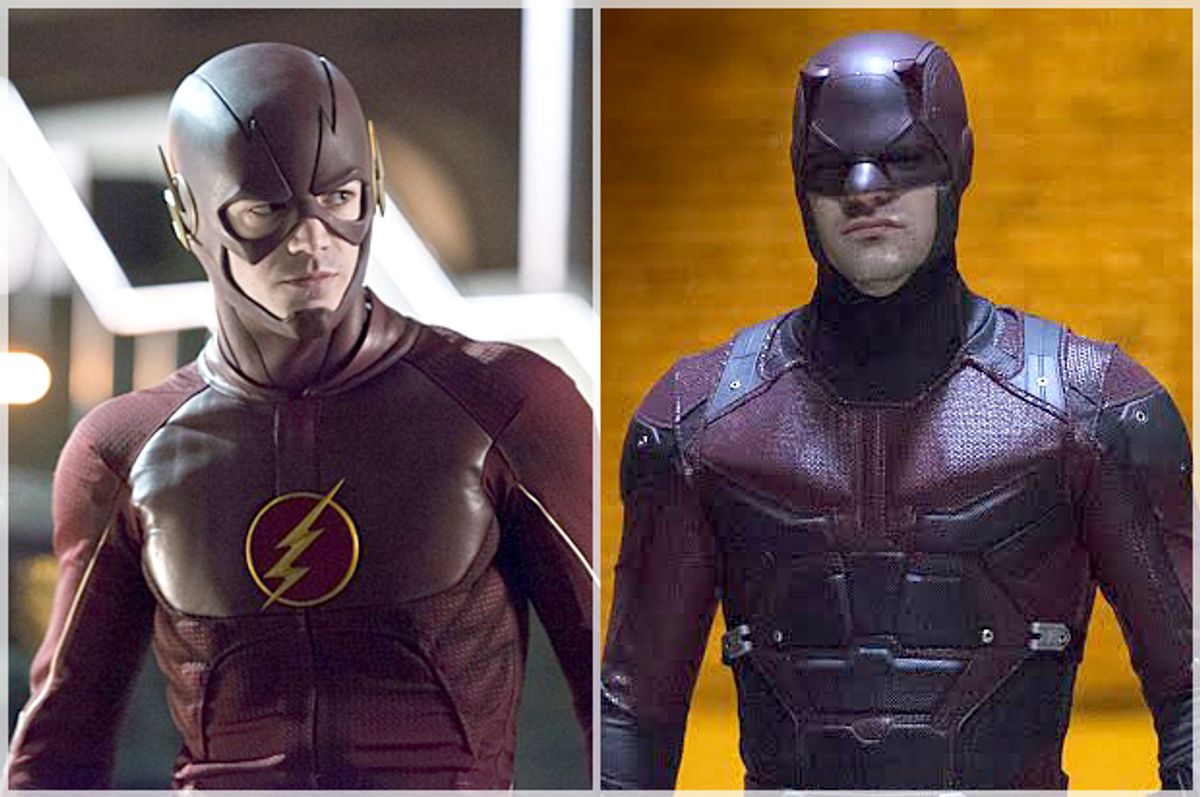 Grant Gustin in "The Flash," Charlie Cox in "Daredevil" (The CW/Netflix)
--

I don’t think it’s a controversial statement to say that the two best live-action, non-humorous superhero TV shows ever appeared in the past year: “Daredevil” and “The Flash.” Though the starring heroes don’t have much in common other than a fondness for red, these series maintained a level of quality previously found only in the best superhero movies, like “The Dark Knight” and “Captain America: The Winter Soldier.”

But which was better?

Now that both are finished for the season, let’s find out if the Man Without Fear or the Fastest Man Alive had a better rookie season.

“The Flash” didn’t have much if any bad acting, and some performances were terrific—especially Tom Cavanagh as diabolical but not cartoony Harrison Wells/Eobard Thawne/Reverse Flash and Jesse L. Martin as Hall of Fame dad/cop Joe West. Also, Grant Gustin as Barry Allen pulled off the difficult trick of being a goody-goody hero you don’t want to punch, in the tradition of Christopher Reeve. “Daredevil” did have some bad acting—mostly by Elden Henson, who made for an insufferable Foggy Nelson. That said, “Daredevil” had two of the recent best performances in any TV genre by Charlie Cox and Vincent D'Onofrio (as Matt Murdock and Wilson Fisk). Daredevil is a boxer, lawyer, ninja, blind man, vigilante, and Catholic who feels every stab at his body and soul: Cox captured all of the above and more. But D'Onofrio stole the series, creating a Kingpin (Fisk’s nickname in the comics) who’s a vulnerable, sophisticated man-monster with a desperate, doomed desire to be a better person. Advantage: “Daredevil”

Both shows pulled classic rivalries from the comics: Daredevil/Kingpin and Flash/ Reverse Flash. These rivalries featured well-developed foils who mirrored each other in ways that were compelling overall, though at times a little on the nose. “Daredevil” pounded the similarities between Fisk and Murdock (violent tendencies, dead fathers, messiah complexes) into our heads frequently and clumsily. The Flash and Reverse Flash, on the other hand, were linked by R-Flash’s mentorship of Barry and his murder of Barry’s mother, which slowly came to light over the season, along with the coolest time-travel shenanigans since season five of “Lost.” That was a more satisfying, if not subtle, approach. Advantage: “The Flash”

Superhero costumes usually look silly in live action: it takes a sharp design to pull off something that’s faithful to the comics but not utterly absurd. For the bulk of “Daredevil,” the costume issue was dodged as a young Matt Murdock fought mob guys and ninjas in a homemade black getup that was, even after sober reflection, badass. When Murdock ultimately donned his horned cowl, he looked ludicrous. On the other hand, Barry Allen’s Flash suit debuted early and leaned toward the cool side of the preposterous spectrum. Advantage: “The Flash”

This is the most obvious contrast between the shows (besides the differing number of episodes: 13 for “Daredevil,” 23 for “The Flash”). Any CW show skews at least a little toward a teen audience, while being on Netflix allowed “Daredevil” to include borderline R-rated language and violence. “Daredevil” did some great things with the freedom—like the virtuosic episode two corridor fight—but it sometimes felt dark for the sake of being dark, as if grimness equaled quality. Like too many comics, “Daredevil” wallowed in its adolescent pain a little too often. Years of mega-bleak “Daredevil” comics are why Mark Waid and Chris Samnee’s current run—which has embraced swashbuckling fun—has been so refreshing. “The Flash” had a smart, seemingly effortless balance between family drama, Buffy-style monster-investigating, metahuman slugfests, and sci-fi adventure. Though a DC property, the tone of “The Flash” felt like Marvel at their best. Advantage: “The Flash”

TV writers enjoy love triangles more than my dog enjoys rolling in filth at the park, and “The Flash” took this tired, potholed route. For most of the season, Eddie Thawne dated Iris West, while poor Barry Allen pined for the woman who comics fans (and time travelers in the show) know will be his future wife. On “Daredevil,” the only major romance involved the villain Wilson Fisk and artist Vanessa Marianna. This crimelord-artist pairing was believable, heartfelt, and unusual for the superhero genre, while the Barry-Iris-Eddie foofaraw was a bit of an eye-roller. Advantage: “Daredevil”

Matt Murdock’s father didn’t want to disappoint little Matt by taking a dive in a fight, so Battlin’ Jack Murdock won and was killed, orphaning Matt and giving him a lifetime of guilt. Barry Allen’s father has been in jail since being wrongly convicted of his wife’s murder, and Barry is still trying to clear him. Barry also carries around a ton of guilt, especially since he found out a future version of himself was there at the time of the murder. This one might be a wash. Advantage: Inconclusive

Faithfulness to the comics

This has zero to do with show quality, but it is fun to talk about, at least if you’re the kind of person who goes to comics conventions, which I am. Both shows came up with brand new plotlines while remaining extremely faithful to the spirit of the comics. Both had enough Easter eggs to give the Easter Bunny back problems, but “The Flash” wins for improbably bringing Gorilla Grodd to TV, alluding to the original event comic “Crisis on Infinite Earths,” and even throwing in the winged helmet of original Flash Jay Garrick. Advantage: “The Flash”

The “Daredevil” season finale was a bit of a letdown: everything wrapped up extremely neatly, more like a so-so superhero story than the cool crime drama the show had been for most of the season. “The Flash” finale—well, I have to wipe away some tears, so excuse me for being a sap as well as a dweeb. I’m not sure all the time-travel stuff made sense, but the emotional beats were spot-on and heartbreaking. This episode felt cathartic and mythological: comic-booky in the best possible ways. Advantage: “The Flash”

It hurts me to say this, because Daredevil is my favorite character in the comics, but I think “The Flash” was a better show by a slim margin. Arbitrary comparisons aside, I’m grateful that superhero comics are finally yielding great shows—and the future looks even brighter. Let’s hope forthcoming shows like “Supergirl,” “Iron Fist,” and “A.K.A. Jessica Jones” continue the trend.