The unbearable whiteness of the Letterman farewells: Let this truly be the end of a show-business era 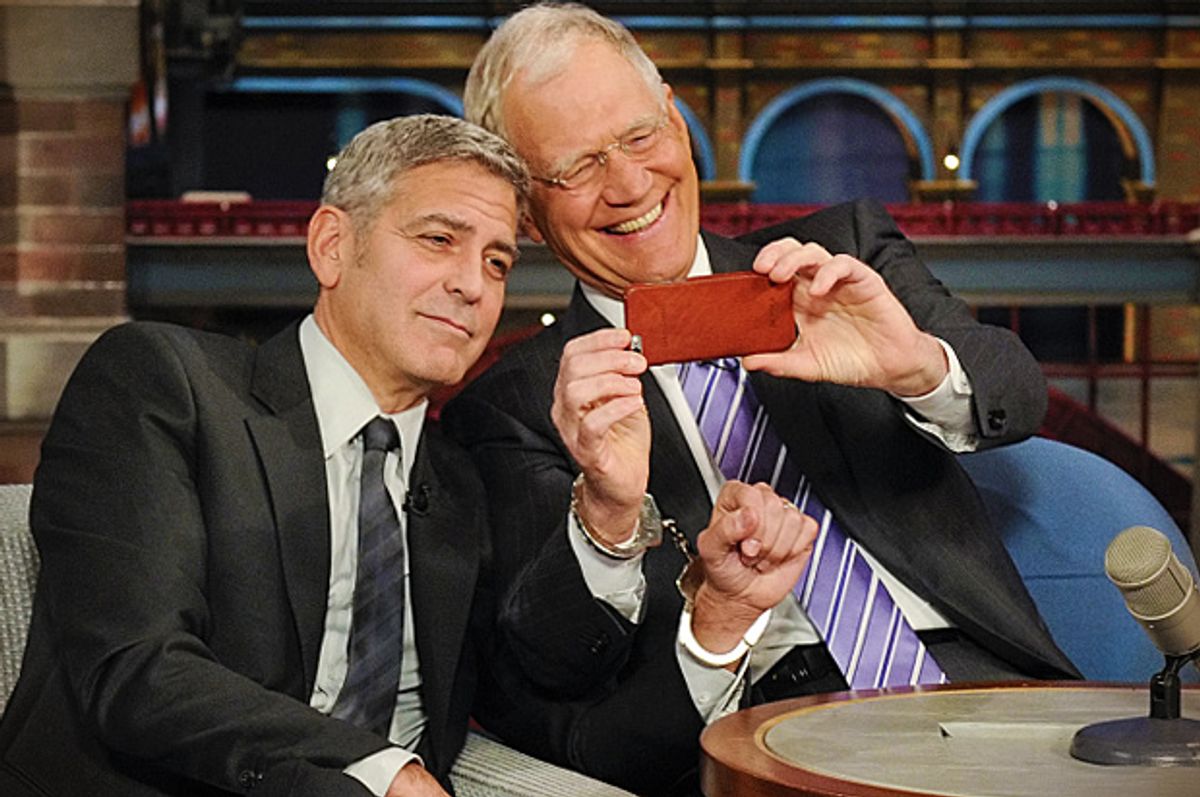 One rule of thumb that we can count on almost all the time is that the world of culture – whether the high culture represented by the literary and fine arts or the pop culture of TV and rock and rap and the rest – moves faster than politics. It tends to move faster, in fact, than the broader U.S. mainstream, and this is especially true on matters of race. So even in the decades before Brown v. Board, actor Paul Robeson was an enormous star of the stage and concert hall. Leontyne Price, born in segregated Mississippi, was singing at Carnegie Hall (and all over Europe) by the ‘50s. Sarah Vaughan, Chuck Berry, Muddy Waters, Miles Davis, Richard Pryor and plenty of other actors, musicians and comedians developed broad and substantial followings decades before we elected a black president. American culture – and define it along any brow you like – has been integrated, however uneasily and imperfectly, for a lot longer than the nation itself.

The process has picked up speed over the last three decades, as Latino and Asian comedians like Paul Rodriguez, Cristela Alonzo, Sofia Vergara, John Cho, Aziz Ansari, Mindy Kaling and Margaret Cho have broken in, as Lee Daniels' "Empire" and Shonda Rhimes have conquered TV, as Chris Rock has become perhaps our smartest major comedian, and as hip-hop and bedroom R&B have become the dominant musical forms. Kanye West and Rihanna are playing with Paul McCartney, and it's never entirely clear who's the biggest draw.

But you’d never know it looking at the way David Letterman is wrapping up "Late Night," which launched in 1982. We don’t really need “a late night landscape that looks like America” – there will always be an imperfect match between a society’s population and the people who excel (and are recognized) within it. The calls to appoint a late-night-host-of-color for purely symbolic purposes feels a bit forced and exactly the kind of quota-making that causes the political right to froth at the mouth and denounce “Hollywood” as a liberal conspiracy, but then again, Larry Wilmore doesn't need anyone's help filling Colbert's old time slot. But Dave’s roll call of greatest hits and rumored musical conclusion -- with also-rans the Foo Fighters -- is at the very least unsatisfying.

Some of the heavy hitters so far on the walk down memory lane have included Tom Hanks, Julia Roberts, Bob Dylan, George Clooney, Don Rickles, Ryan Adams, Adam Sandler, Tom Waits, Howard Stern and Bill Clinton. It’s kind of hard to leave out an artist as major as Dylan – as uneven as most of his work has been over the last few decades – and Clinton was, um, president. Surely, these are all talented people. But what’s missing from this list?

A lot of the people Letterman has put on his show over the years have been comedians and actors, and Dave did not invent the racial cast of our comic and cinematic history. So let’s be fair here for a moment: American comedy as we know it grew heavily out of a Jewish circuit that ran from vaudeville to the Borscht Belt and eventually to a Hollywood that had primarily been founded by Jews. As Neil Gabler documented in “An Empire of Their Own,” even Jewish moguls liked their studio’s actors to be (white) Gentiles – whom they considered “all-American.” So if the Letterman farewell were, say, a roast at the old Beverly Hills Friars Club, with Milton Berle and Bing Crosby presiding, the complexion of the stars would not raise our eyebrows.

But anyone who’s watched a movie or television show or been to a comedy club knows there been a deep and rich lineage of African-American humor; it goes back to the Chitlin Circuit, to Lincoln Perry's Stepin Fetchit, as troubling as the character is to watch now,  and before. Some of it is explicitly about race, some of it is not. It’s arguably been to the last few decades what Jewish humor was in the years from the Marx Brothers to Henny Youngman. Same thing with acting, rock music, hip-hop. (For what it’s worth, Letterman put a spot-on James Brown on his show that first year.) Walk down any street in New York, where Letterman’s show is filmed, and the racial and ethnic mix will be wide and complex. Turn on the TV or check out red carpet coverage, and show business looks less and less white every year.

And the best we can do – as we wrap up 33 years of a show that ran almost every night, and had pretensions to “edginess” -- is Tom Hanks and Eddie Vedder? No bro-hug reprise with Key and Peele, even?

It’s hard not to mourn a bit for the end of a show that lasted more than three decades and never got terrible. And in some ways, what we’re seeing in the farewell shows is a look back to a whiter period of American pop culture – before Jay Z and Beyoncé became America's other First Couple, when Stallone and synth rock ruled, when Reagan was denouncing welfare queens driving Cadillacs, when immigration from Asia was still limited, when it was simply inconceivable that we’d have a black president. (OK, to many American Caucasians it still is, but let’s leave that aside for now.)

The clubby, in-joke feel of Letterman’s show was part of its appeal from the very beginning: Being able to “get” the Guy Under the Seats – or to realize that there wasn’t really anything to get besides a pretty obvious parody of showbiz self-regard – was part of what made it funny. So when the band of outcasts, loners, ironists and insomniacs that the early version of the show was aimed at starts to seem like an all-white loser’s club, the effect is dissonant.

No show needs to end with an earnest group hug of pan-racial affirmation: This is television comedy, not a “dialogue about race.” But Letterman seems like he’s offering a farewell from 1955 rather than 2015.