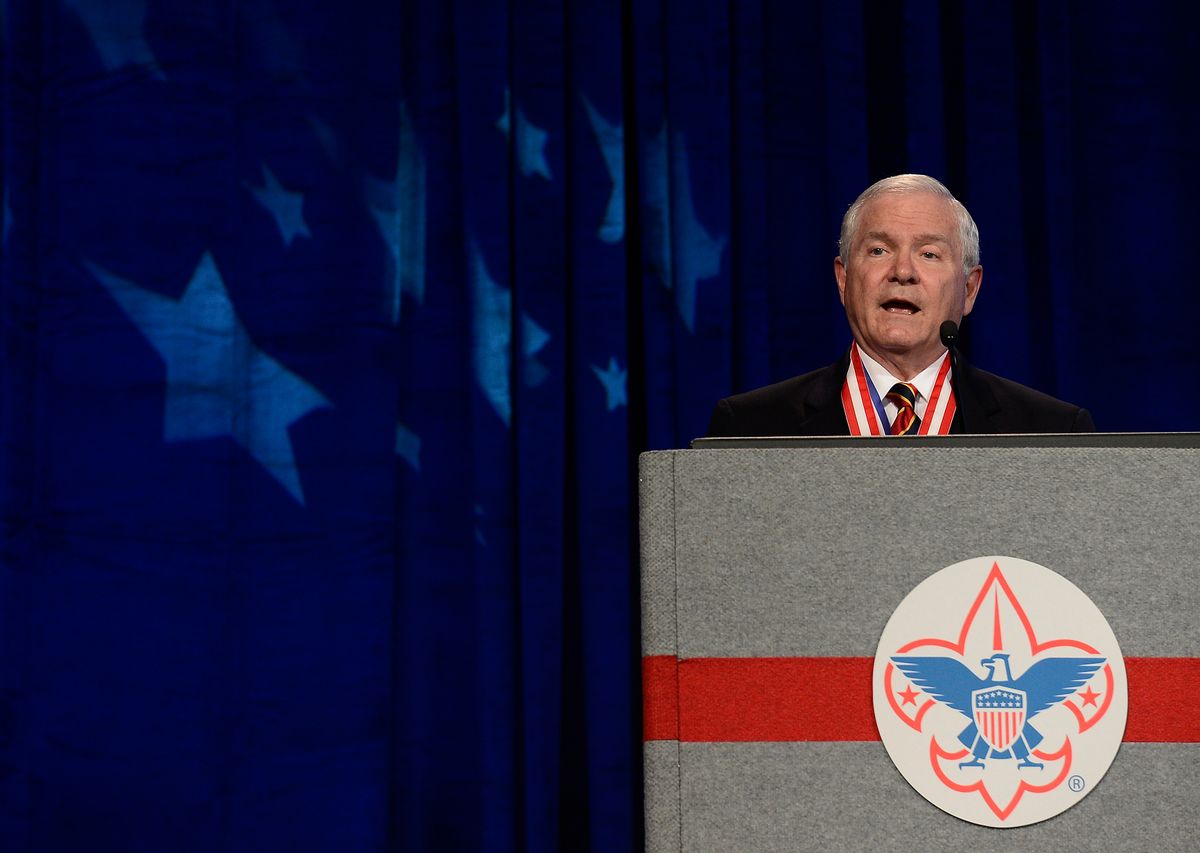 FILE - In this Friday, May 23, 2014 file photo, former Defense Secretary Robert Gates addresses the Boy Scouts of America's annual meeting in Nashville, Tenn., after being selected as the organization's new president. On Thursday Gates said that the organization's longstanding ban on participation by openly gay adults is no longer sustainable, and called for change in order to avert potentially destructive legal battles. (AP Photo/Mark Zaleski, File) (AP)
--

NEW YORK (AP) — The national president of the Boy Scouts of America, Robert Gates, said Thursday that the organization's longstanding ban on participation by openly gay adults is no longer sustainable, and called for change in order to avert potentially destructive legal battles.

In a speech in Atlanta to the Scouts' national annual meeting, Gates referred to recent moves by Scout councils in New York City and elsewhere to defy the ban.

"The status quo in our movement's membership standards cannot be sustained," he said.

Gates said no change in the policy would be made at the national meeting. But he raised the possibility of revising the policy at some point soon so that local Scout organizations could decide on their own whether to allow gays as leaders.

In 2013, after bitter internal debate, the BSA decided to allow openly gay youth as scouts, but not gay adults as leaders. The change took effect in January 2014.

Gates, who became the BSA's president in May 2014, said at the time that he personally would have favored ending the ban on gay adults, but he opposed any further debate after the Scouts' policymaking body upheld the ban.

On Thursday, however, he said recent events "have confronted us with urgent challenges I did not foresee and which we cannot ignore."

He cited the recent defiant announcement by the BSA's New York chapter in early April that it had hired the nation's first openly gay Eagle Scout as a summer camp leader. He also cited broader developments related to gay rights.

"I remind you of the recent debates we have seen in places like Indiana and Arkansas over discrimination based on sexual orientation, not to mention the impending U.S. Supreme Court decision this summer on gay marriage," he said. "We must deal with the world as it is, not as we might wish it to be."

Gates said the BSA technically had the power to revoke the charters of councils that defied the current ban on gay adults, but he said this would be harmful to boys in those regions

He also noted that many states have passed laws prohibiting employment discrimination based on sexual orientation, raising the possibility of extensive legal battles.

"Thus, between internal challenges and potential legal conflicts, the BSA finds itself in an unsustainable position, a position that makes us vulnerable to the possibility the courts simply will order us at some point to change our membership policy," Gates said.

He expressed concern that an eventual court order might also strike down the BSA's policy of banning atheists.

"Waiting for the courts is a gamble with huge stakes," he said. "Alternatively, we can move at some future date — but sooner rather than later — to seize control of our own future, set our own course and change our policy in order to allow charter partners — unit sponsoring organizations — to determine the standards for their Scout leaders."

Such an approach, he said, would allow churches, which sponsor about 70 percent of Scout units, to establish leadership standards consistent with their faith.

"I truly fear that any other alternative will be the end of us as a national movement," he said.

Zach Wahls of Scouts for Equality, a group that has campaigned against the ban, welcomed Gates' remarks.

"Dr. Gates has built his reputation on straight talk and tough decisions," said Wahls. "It seems like the Boy Scouts will continue an internal dialogue about the subject and that a change within the next year or two is imminent."

Until Thursday, there had been no indication how the BSA would respond to the New York Councils, which on April 2 announced the hiring of Pascal Tessier, an 18-year-old Eagle Scout. Tessier, currently finishing his freshman year of college, has been a vocal advocate of opening the 105-year-old organization to gay scouts and leaders.

Tessier had been getting legal advice from prominent lawyer David Boies, whose recent causes include arguing for recognition of same-sex marriage. Boies said it was possible that Tessier's hiring could lead to litigation between the New York chapter and the BSA's national headquarters, but he expressed hope this could be avoided.

Another of Tessier's lawyers, Josh Schiller, expressed hope that the BSA's ban would be lifted.

"People will join the Boy Scouts and look at them as an organization that has the principles of equality," he said.