Kim Kardashian is not unstoppable: How to beat flawless TV celebs in the book sales game

Unlike reality show stars, YouTubers like Zoella and Connor Franta are, in fact, here to make friends—and get paid 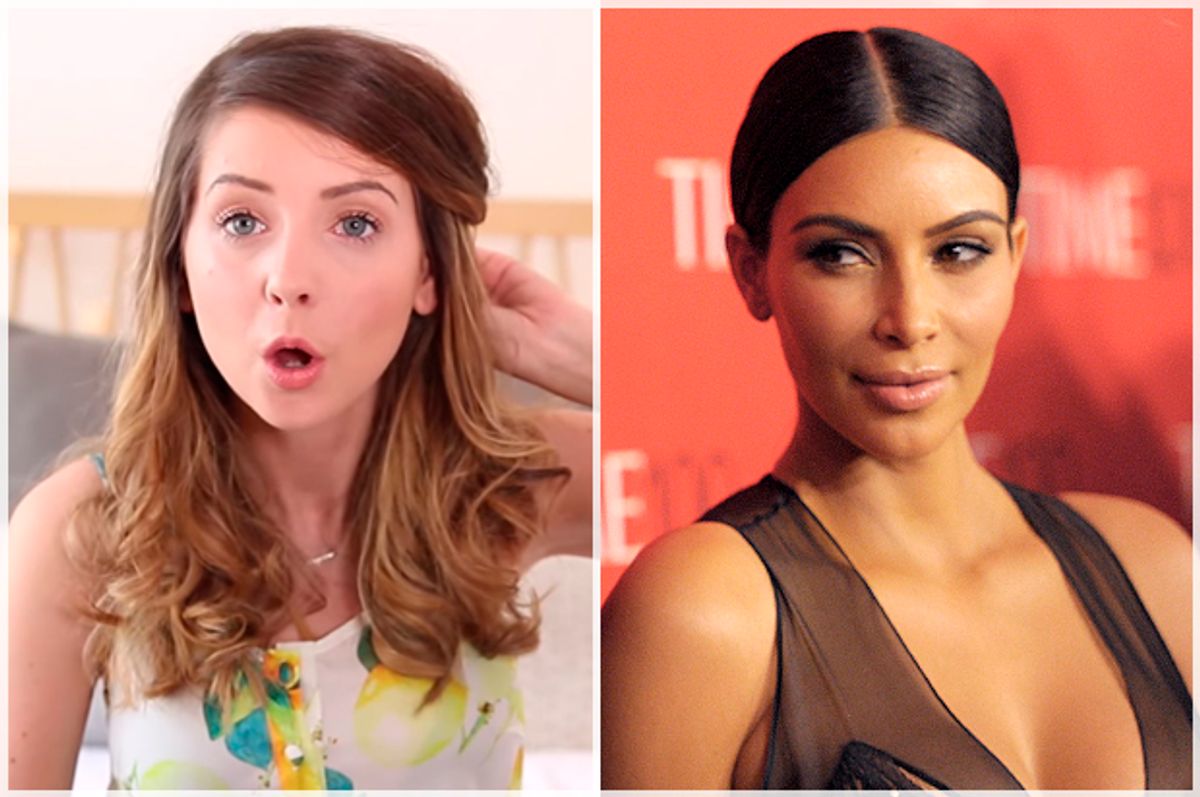 "People don't understand that you can be famous without being rich," a semi-famous friend once complained to me, but in the strange new world of Internet-driven culture, you can be rich and famous without actually being famous. In other words, you -- provided you're young, perky, wholesome and a bit goofy -- can be a YouTube star.

Most people over 30 have never heard of vlogging celebrities like Zoe "Zoella" Sugg or Tyler Oakley, even though more than twice as many people subscribe to their YouTube channels than tuned in to watch the series finale of "Mad Men." A Variety poll conducted last summer found that the five most influential public figures in the eyes of American teens were all YouTube stars. Many top YouTubers -- in particular, the most popular producers of let's-play gaming videos -- also rake in millions of dollars in advertising revenue.

And, increasingly, YouTubers write books. This might sound like a strange confluence of old and new media, but it does make a certain sense. YouTube stardom is a true, unmitigated cult of personality. The people who excel at it have no evident talent beyond the ability to transmit megawatts of likability. In their videos, which they often produce on their own, they talk about themselves and their lives, in their own voices. It's an activity that has a lot in common with writing a book, especially with writing a memoir.

Book publishing has not been slow to pounce on these celebrities. Contrary to its reputation for stodginess, much of the book industry keeps an eagle eye on teen trends. Children's and YA (young adult) books continue to be the only categories of book publishing that show consistent growth. So it's no surprise that publishers have been all over the YouTube stardom phenomenon, or that the past year has seen the release of over a dozen books by YouTubers, with still more to come in the summer and fall.

Still, it's one thing to click the subscribe link on a YouTube page and another to fork over as much as $25 for a book. Besides, to the world beyond their fan base, the YouTubers don't seem truly famous. Their photographs don't appear in gossip magazines, their names aren't bandied about as examples of this or that aspect of modern celebrity and above all they aren't in the movies or on TV, media which remain central to most Americans' notions of what it means to be famous.

As Robert Kyncl, vice president and global head of business at YouTube, told Tad Friend of the New Yorker, the established system of stardom created "a lot of casual fans who knew a little bit about someone like Kim Kardashian.” But thanks to the Balkanizing effect of the Internet, "PewDiePie [a Swedish gaming vlogger] has 32 million subscribers -- and most people have never heard of him.”

Can somebody most people have never heard of really sell a celebrity book? So far, PewDiePie hasn't ventured to try, and the sales for many of his fellow YouTube stars are still being counted. Yet early figures obtained from Nielsen BookScan, a market survey firm that covers approximately 85 percent of the print book market, suggest that YouTube fame might be doing a better job of filling bookstore cash registers than the old-fashioned kind.

Take, for example, the aforementioned Kardashian, who just published a collection of photographs and text, "Selfish." It consists of what could be considered the principle product of the Kardashian industry, which is photographs of Kim Kardashian. You don't have to have ever watched a minute of the various reality TV shows about the Kardashian family to know who Kim Kardashian is. She's genuinely famous, if only as the quintessential specimen of someone who's famous for being famous.

"Selfish," in its first week of publication, sold only about 14,000 copies through the outlets BookScan tracks. By comparison, YouTube star Connor Franta's "A Work in Progress: A Memoir" sold well over twice that number, around 33,000. (This discrepancy seems even more pronounced when you consider that the majority of sales for a photography book like "Selfish" will be for the print edition, while a text-based book like "A Work in Progress" will also reap e-book sales, not counted by BookScan.) In its second week of sales, Franta's book move 14,210 copies. Kardashian's? Only 5,702.

Of course, the sales of both books are dwarfed by marquee authors like Lee Child and James Patterson, but (depending on the advance they forked out for it) most book publishers would be very pleased to land sales of 73,000 for an autobiographical first novel like Sugg's "Girl Online," which was published last fall. Compare that to a book that has become an infamous symbol of book publishing's chase after meaningless celebrity, "A Shore Thing," the autobiographical first novel by Nicole "Snooki" Polizzi, star of "The Jersey Shore." "A Shore Thing," despite a sizable marketing push, has only managed to move 40,000 copies in hardcover since its publication in 2011.

A handful of reality TV stars have found real success as authors. (Let's just set aside the question of how many of them actually write their own books.) Lauren Conrad and the various members of the Duck Dynasty are two examples. But more often, from the stars of "Teen Mom" to Courtney Robertson of "The Bachelor," who published "I Didn't Come Here to Make Friends: Confessions of a Reality Show Villain" last year, the results are disappointing, rarely exceeding 10,000 copies in hardcover or paperback.

YouTubers' novels and memoirs, on the other hand, seem to be good for at least 30,000 to 40,000 copies, and some of these new stars, like Sugg and Shane Dawson, are good for a deal more. YouTuber how-to books -- "Make Up" by Michelle Phan and "My Drunken Kitchen" by Hannah Hart -- have performed solidly.

While such numbers may seem modest to those unfamiliar with the book business -- especially when juxtaposed with the astronomical number of subscriber counts that top YouTubers boast -- the upper end of these results is more than respectable, while the lower end never dips too deep. Franta, for example, has outsold the new Jodi Picoult novel by 15,000 copies; he has a one-week lead on her, yes -- but only one week! And while it's too soon to be conclusive, the average YouTube author does seem a less risky bet than the average reality TV star, even when the TV figure is a household name.

Why? The most plausible reason lies with reality TV's dependence on trumped-up conflict and villains and divas who drive it. There are probably some viewers who like Kardashian or Snooki, but the real role of such stars is to serve as objects of our contempt. They're people we love to hate, or at least love to look down on. They make for good TV, but they aren't personalities you want to spend 250 pages with, or give money to.

YouTube stars, by contrast, live and die by their charm, their accessibility, their relatability, their niceness. They are most definitely here to make friends -- in fact that's the only thing they're here to do. The intimacy of the form -- the way the performers, through the medium of ubiquitous screens, look into their fans' eyes and speak directly to them -- offers these young people up as virtual bffs. And if your best friend wrote a book, wouldn't you buy a copy?

YouTubers have a way to go, however, before they catch up with the sort of celebrity author who's both a household name and a person you'd love to have over for brunch. Comedians like Tina Fey, Amy Poehler and Mindy Kaling sell hundreds of thousands of books by offering up life lessons, inspirational stories of how they found success, anecdotes about the other famous people they've met and worked with and a few precious glimpses into their everyday lives -- all the usual stuff of celebrity autobiography. They're also genuinely creative individuals, which is more than most reality TV stars or YouTubers can claim. Nice as it is to be liked, it's nicer to give the public a good reason for it.