This is mega-pastor John Hagee, the leading purveyor of a theory that the "blood moon" is a harbinger of apocalypse 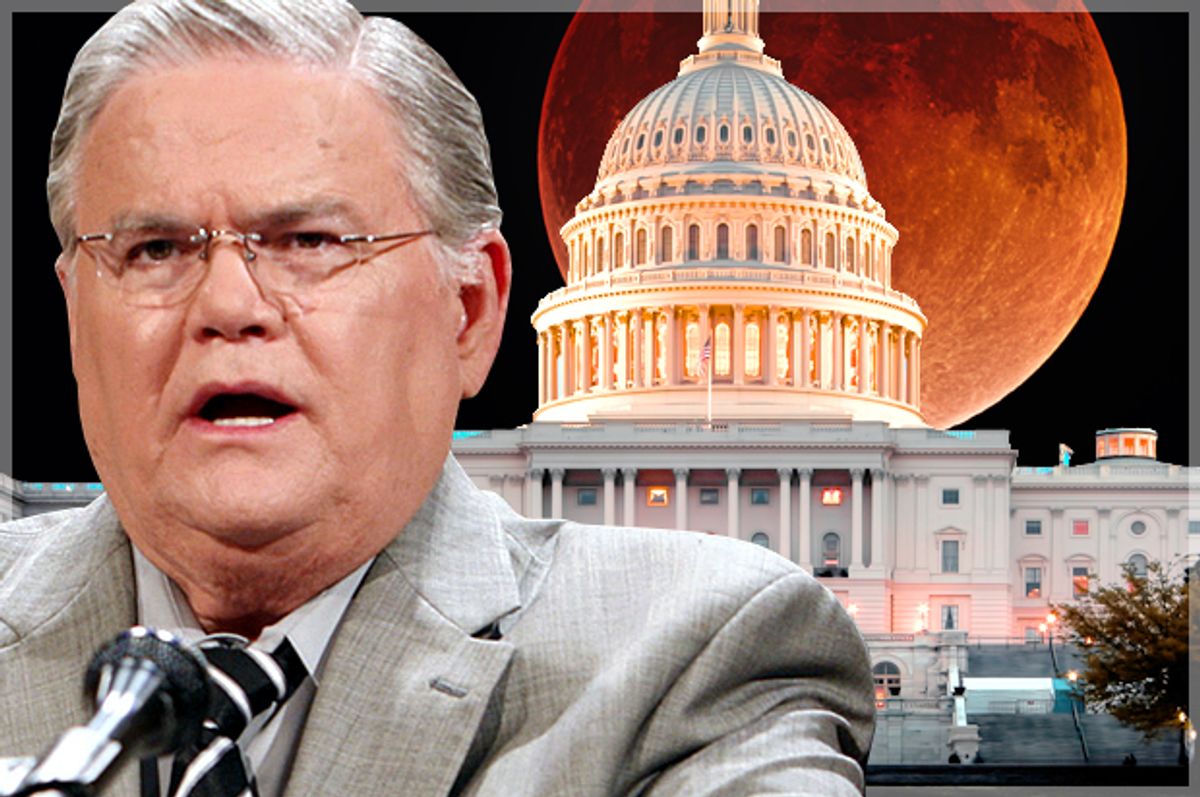 In 2015, there is a United States congressman who believes that the so-called blood moon prophecy determines the fate of the Middle East and, because of some more prophecy, the fate of the world, of all of us. In 2015. Common Era.

"Blood moons," which is a gussied-up way of naming your garden-variety lunar eclipse, “have preceded world-changing, shaking-type events,” says Rep. Jody Hice of Georgia, a man constitutionally permitted to vote in one of the world’s most powerful legislative bodies. Legislation, accords, Security Council Resolutions, military aid packages -- why consider this mere terrestrial ephemera when you can just go out into your backyard and consult the moon?

While the prophecy may seem fringe -- like something a hooded Nostradamus type from the Dark Ages would wheeze in dim and flickering firelight -- it’s gaining surprising traction in conservative media, and is being adopted as legitimate by prominent figures, including Hice in Congress and the Family Research Council, the powerful social conservative lobbying group in Washington. Mega-pastor John Hagee, the leading purveyor of blood moon prophecy talk, is powerful in Washington, able to command the attendance of influential conservative politicians to his events.

Here’s how the prophecy is supposed to shake out: It was “discovered” that blood moon tetrads (four lunar eclipses occurring within a year and a half or so) that coincide with traditional Jewish feasts and holidays announce world-historical moments for Jews; and because the fate of the Jewish people determines the fate of humanity, according to fundamentalist Christians, each of these revelations signals the approach of the End Times.

A blood moon tetrad coinciding with Jewish holidays in 1493 is said to have marked the expulsion of the Jews from Spain and the European discovery of America. Another in 1948-49 signaled God’s pleasure with the founding of the state of Israel; and the next, in 1967-68, coincided with the Arab-Israeli Six-Day War, which allowed Israel to acquire Arab territory, much of which it still maintains. The occupied territory is considered prophetically necessary and in accord with Scripture by many conservative Christians.

But all of that was merely prelude to the tetrad currently underway. The third blood moon fell in April, and the final prophetic moon will occur in late September. This tetrad, according to the prophecy, signals the beginning of the end of the world. Something bad happens to Israel, yada yada yada, then God turns out the lights and shutters the physical universe.

There is, if you think about it, a bizarre strain of anti-patriotism at work in how these conservative Christians denounce America and extol Israel in the prophecy: America’s lost moral compass (gays can get married some places, I guess?) has angered God, while Israel’s aggressive stance in the region pleases Him. The (quite false) narrative of existential crisis for Israel compounds God’s anger at the U.S. for our wayward path, and the fourth blood moon is the tolling of a final bell. It is pro-Israel America-hating, in a way.

There you have it, though: The apocalypse is coming this September. So it’s crunch time in the land of the crazies. All hands on deck, everybody. This is not a drill. On May 14, a large banner atop World Net Daily, the popular conservative Christian website, advertised its “exclusive” report on the four-month “countdown” to the “Biblical day of reckoning.” A movie about the prophecy was released last month in theaters, and pastor John Hagee’s bestselling book about blood moons spent months on Amazon’s top 100 books list.

The impending doom even impelled Anne Graham Lotz, daughter of Rev. Billy Graham, to issue a call for a seven-day “mayday” prayer offensive, happening this week, to appeal to God, with this warning to motivate:

“Institutions will collapse. Banks will close. The Stock Market will plunge. Planes will fall out of the sky. Cars will crash on the road. Government in America at every level will disintegrate. Families will be torn apart. In the unprecedented turmoil, our nation will be vulnerable for our enemies to seize the moment and attack us. There will be mass chaos, confusion, fear, grief, despair, anger, threats, danger… judgment.”

The Family Research Council urged its flock to heed Lotz’s call. And note: The FRC is not some ramshackle backwoods chapel filled with snake handlers; the well-heeled D.C. lobbying group’s “Values Voter Summit” in late summer will be a who’s who of conservatism, with Rush Limbaugh, Jeb Bush, Ted Cruz, Marco Rubio, Sean Hannity and a host of others expected to speak at the conference.

The prophecy and its increasingly arcane calculus stand in strange relation to the coincident right-wing rejection of science. The actual, impending threat to humanity, global warming, is considered a “hoax,” an invention out of whole cloth, while the color of the moon and the spotty wisdom of goat herders from 3,000 years ago is stitched together into some kind of astro-hermeneutics, used to determine whether or not October happens.

“When you take scientific fact and historical fact and line it up exactly with prophetic fact and they all are in perfect agreement, now is time to put doubt aside and to believe that God is trying to communicate to us in a very special way...and something is about to change.”

It is presented in the form of science, without the content of science; a weird and, to be honest, embarrassing mimicry of scientific rationality. But at least one U.S. congressman considers it a basis on which to make decisions. Other far-right House Republicans, like congressional crazy uncle Louis Gohmert, though mum on the moon talk, do run around with the likes of Hagee, and as the pre-rapture summer progresses we might hear of the prophecy’s adoption by the members of Congress who follow Hagee and his ilk. Because we’re apparently not quite finished with the Reformation, Pope Francis’ address to a joint session of Congress in September, which aligns with the fourth and final moon, is compounding the certainty of End Times for many Christians, and Gohmert and others are already freaking out about it. This is a field day for a large swath of conservative Christians, and I prophesy that this will only get more entertaining.