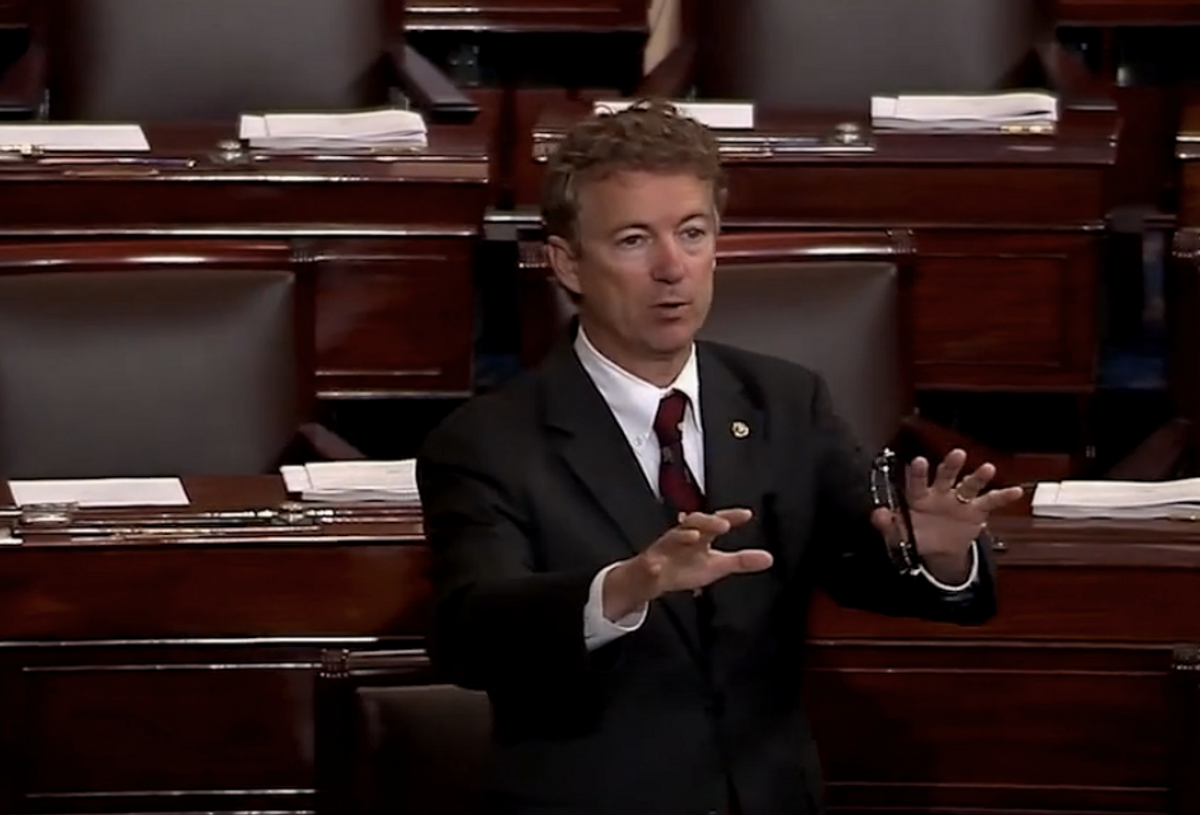 Beginning Tuesday afternoon, presidential candidate Sen. Rand Paul, R-Ky., embarked upon his latest filibuster, this time in hopes of stalling the renewal of the USA Patriot Act. Based on his track record, we can safely expect him to entirely reverse his position within the week.

Before we get too carried away with using the word "filibuster" to describe what he's doing, it's not an actual filibuster because as of Wednesday evening Eastern time, there isn't any Senate business that’d be delayed on the floor by his filibuster; therefore he's not stalling a vote nor is he preventing the Senate from debating anything. So, technically, Paul is just talking a lot. However, if he continues past midnight Wednesday night, Paul's monologue will begin to flummox some important proceedings.

Primarily, it'll delay a vote that would give President Obama fast-track authority on implementing the controversial Trans-Pacific Partnership (TPP) agreement.

Secondarily, and ironically, it could also delay a vote on the USA Freedom Act, a bill that would end the National Security Agency's (NSA) bulk collection of electronic metadata. It's safe to say that such a delay is an unintended negative consequence for die-hard Paul supporters on both the libertarian right, as well as Edward Snowden supporters on the left. Especially ironic is the fact that Paul tweeted at the outset of his filibuster, "It's time to end the NSA spying!" Delaying the Freedom Act would, in effect, allow NSA spying to continue.

By the way, his "end the NSA spying" tweet might be the springboard for another Paul flip-flop. There's no solid indication that he's seeking to literally end all NSA spying across the board. Instead, Paul's beef has always orbited around the metadata collection program under Section 215 of the Patriot Act; a section that certainly demands to be either reformed or outright repealed and replaced. Cutting to the chase, by engaging in this non-filibuster filibuster, he's both challenging the law that gave us 215, while also potentially delaying a law that would repeal it. Worth noting, too, is that Paul voted against cloture, and therefore against the USA Freedom Act (ending bulk metadata collection) back in November. So, perhaps he simply doesn't care whether there's another vote.

That leads us to Paul's, shall we say, gelatinous relationship with a variety of top-shelf issues over the years. Before we revive the "Stand With Rand" hashtag, let's review.

Should we use military force against ISIS?

Back in September, Paul appeared to be staunchly opposed to intervention:

“Intervention created this chaos,” Paul said on the Senate floor in September 2014 to explain why he was not supporting a plan to train and arm Syrian rebels against ISIS. “To those who wish unlimited intervention and boots on the ground everywhere, remember the smiling poses of politicians pontificating about so-called freedom fighters and heroes in Libya, in Syria, and in Iraq. Unaware that the so-called freedom fighters may well have been allied with kidnappers and are killers and jihadists.”

That same month, he reversed positions and expressed support for congressionally authorized intervention along the lines of an authorization for use of military force (AUMF), not unlike the blank check the Bush administration received from Congress to fight terrorism and to invade and occupy Iraq indefinitely:

In an emailed comment, however, Paul elaborated by saying: “If I were President, I would call a joint session of Congress. I would lay out the reasoning of why ISIS is a threat to our national security and seek congressional authorization to destroy ISIS militarily.”

Should predator drones be used against American citizens?

During his filibuster of John Brennan’s nomination as CIA chief, Paul clearly stated the following:

"I rise today to oppose the nomination of anyone who would argue that the President has the power to kill American citizens not involved in combat.

"I rise today to say that there is no legal precedent for killing American citizens not directly involved in combat and that any nominee who rubber stamps and grants such power to a President is not worthy of being placed one step away from the Supreme Court."

One month later, he suggested that drones could be used by the police to kill liquor store thieves on American soil:

"I’ve never argued against any technology being used when you have an imminent threat, an active crime going on. If someone comes out of a liquor store with a weapon and fifty dollars in cash, I don’t care if a drone kills him or a policeman kills him… If there’s a killer on the loose in a neighborhood, I’m not against drones being used to search them out, heat-seeking devices being used, I’m all for law enforcement."

Then, in August 2014, with turmoil in Ferguson, Missouri, as the backdrop, Paul seemed to oppose the police's use of military equipment:

"The militarization of our law enforcement is due to an unprecedented expansion of government power in this realm. It is one thing for federal officials to work in conjunction with local authorities to reduce or solve crime. It is quite another for them to subsidize it. Americans must never sacrifice their liberty for an illusive and dangerous, or false, security."

Should we continue to spend money on aid to Israel?

In March 2011, he proposed eliminating all aid to Israel:

"While this budget proposal does eliminate foreign aid to Israel, it is not meant to hurt, negate, or single out one of America’s most important allies. This proposal eliminates all foreign aid to all countries. Israel’s ability to conduct foreign policy, regain economic dominance, and support itself without the heavy hand of U.S. interests and policies, will only strengthen the Israeli community. The elimination of all foreign aid, including provisions to Israel, is not necessarily a new idea."

Three years later, he denied ever proposing such a plan:

"I haven’t really proposed (phasing out aid to Israel) in the past."

Should birth control be banned?

In 2013, Paul introduced the personhood amendment that would not only have banned abortions but also would have in effect banned many forms of birth control, including some forms of the pill. Paul also supported the Blunt Amendment, which would have given employers an excuse to deny contraceptive health care coverage based on their conscience.

"There may be various opinions in here, but there’s probably almost nobody who wants to ban birth control. I haven’t heard any Republican politician who does."

What about the Civil Rights Act?

While running for Senate in 2010, Paul clearly stated that parts of the Civil Rights Act infringed on the rights of businesses.

"One [title] deals with private institutions and had I been around, I would've tried to modify that."

In July 2014, he denied ever opposing the section of the Civil Rights Act preventing discrimination in private businesses and institutions. Asked by NBC News if he ever opposed the title, Rand Paul replied:

The upshot here is that Paul makes former Gov. Mitt Romney look like a pillar of steadfast integrity.

Paul's flip-flops are very easily explained. Rand Paul is a serial panderer. In less conservative circles, he'll repeat various moderate, if not liberal, views. But as soon as he's confronted by Fox News Channel, or by an AM radio talk show host, such as when he's appeared as a guest of "The Alex Jones Show," where he's dabbled in 9/11 trutherism, he reverses those less conservative views and embraces more hawkish positions. At the very least, it's obvious that Paul has very few core convictions and, more so than many other career politicians, will simply blurt whatever is necessary to extricate himself from tight spots, while taking full advantage of the epistemically closed, fish-bowl nature of modern American politics. He's cynical enough to believe that no one will reference his previous remarks, and when they do, opponents can simply be shushed or scolded, as was the case on both CNBC and with "Today" show anchor Savannah Guthrie last month.

Ultimately, how can anyone "Stand With Rand" when Rand himself doesn't know where he stands?