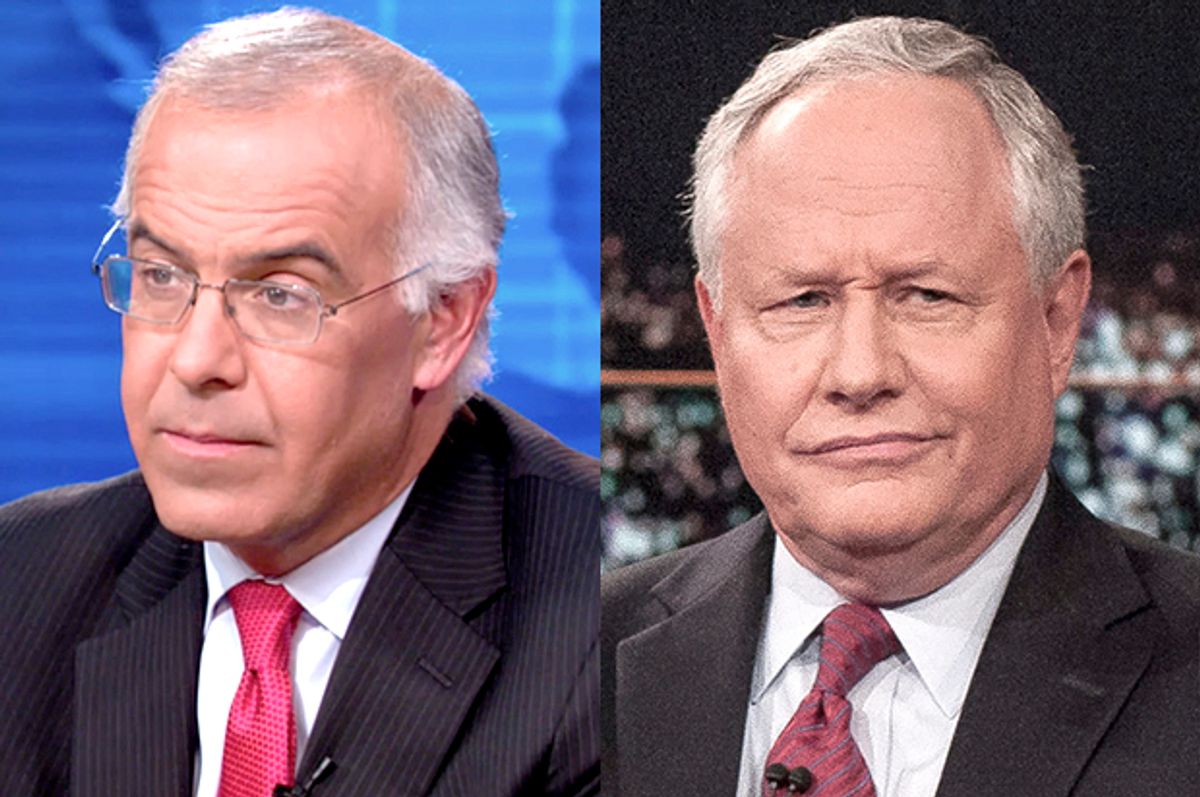 Egghead-warmonger Bill Kristol published a column yesterday about the Iraq war. Astonishingly, it was titled “We Were Right to Fight in Iraq.” The piece would be laughable if it wasn’t written earnestly, and without a hint of irony. But we’ve come to expect this sort of thing from Kristol. There are, apparently, not enough corpses in the world to convince him that a mistake was made.

Kristol is a special breed of ideologue; his ability to hold false beliefs in spite of contrary evidence verges on the heroic. Like most neoconservatives, he’s a disciplined nihilist; he simply refuses to believe in reality. The man helped lay the intellectual foundations for America’s misadventure in Iraq, and he appears not to have noticed that it was a bad idea. Indeed, he persists in recycling bankrupt arguments in defense of it. A quick glance at his latest screed is instructive.

“We were able to bring the war to a reasonable conclusion in 2008…When President Obama took office, Iraq was calm, al-Qaeda was weakened and ISIS did not exist…The Obama administration threw it all away. It failed to support the dissidents in Iran in 2009, mishandled the Iraqi elections in 2010, removed all U.S. troops from Iraq at the end of 2011, and allowed the Syrian war to spiral out of control from 2011 on.”

Virtually every syllable of that passage is dripping with errors. First, notice how he casually uses the phrase “reasonable conclusion.” What, exactly, does that mean? There was nothing conclusive about the situation in Iraq at that time. On the contrary, Bush surged troop numbers in 2007 which temporarily provided stability, but that stability was destined for collapse the second our troops withdrew. Kristol won’t say so, but what he’s really arguing for here is a permanent occupation of Iraq, not the end of a war.

Second, it was President Bush, not Obama, who agreed to withdraw troops at the 2011 date. Obama merely fulfilled that agreement. Again, short of permanently and illegally occupying a sovereign state, what else would Kristol have us do? He doesn’t explain himself here, because that demands engagement with reality.

Third, Kristol misleadingly states that “al-Qaeda was weakened and ISIS did not exist.” That’s not even half-right. ISIS is an outgrowth al-Qaeda in Iraq, and al-Qaeda in Iraq only exists because President Bush, following the advice of Kristol, invaded that country without a long-term plan. But Kristol strides right past that because acknowledging it requires an admission of guilt, of which he’s incapable. Kristol also nonchalantly writes that “Iraq was calm” and that the “Obama administration threw it all away.” Evidently, subduing a civil war with 130,000 American troops constitutes calm in Kristol’s universe. What’s nauseating is that Kristol’s memory conveniently begins the moment Obama took office: Nothing said or done before 2008, by him or anyone else on the wrong side of history, counts.

Fourth, Kristol accuses Obama of allowing “the Syrian war to spiral out of control.” The implication here is quintessentially neoconservative: It assumes that Obama could have magically dictated the course of events in Syria. This belief in the ability of America to bend history to our will undergirded Kristol’s utopian nation-building scheme in Iraq. That project failed spectacularly, and Kristol learned absolutely nothing from it.

Kristol also seems to think that Obama could have intervened more directly in Syria in order to stunt ISIS’s growth. But, like everything else he writes, that’s just a theoretical assumption with no basis in material reality. For example, Kristol ignores that there was no way to effectively disentangle “moderate” Sunni factions in Syria from extremist elements. Funneling more arms into Syria would likely have had the unintended consequence of strengthening groups like ISIS. In fact, this is precisely what’s happened in Iraq: We trained and armed Iraqi soldiers only to see them surrender those weapons to ISIS. That Kristol remains oblivious to this possibility is as stunning as it is shameful. The crisis of ISIS is itself an unintended consequence of the war in Iraq, a war Kristol championed from the start. And yet he believes we should have pursed a similar strategy in Syria. Unbelievable.

One of the perks of being an ideologue is the plasticity of mind that accompanies it. Living in an ideological bubble means never having to admit error. No matter how tenaciously reality refutes theory, it’s always reality that gives way. Kristol and his fellow travelers are totally unconstrained by the facts; they live peacefully in the false reality they’ve created, and nothing can shake them from their stupor. Hundreds of thousands of Iraqis and thousands of Americans have died; trillions of dollars have been wasted; and Kristol appears not to have considered that he was wrong – about anything.

When you’re able to abdicate all responsibility, when you never have to bear the costs of your blunders, everything remains an abstraction, a game. Such is the case with Kristol. He’s pathologically incapable of self-reflection. At every step of this misbegotten war, he’s advocated escalation. His impulse is always to double-down on mistakes, because the alternative is taking accountability and changing course, which is a sin among ideologues.

If there were any justice in this world, Kristol would pay a price for what he’s done. But that’s not the world we live in, and Kristol’s public existence is a shameful reminder of that.