Mike Huckabee is beyond gross: The sick hypocrisy of a man who slimes Obama's parenting, but defends Josh Duggar, admitted sexual molester

A would-be president defends an alleged child molester because the right-wing base demands it. It's horrifying 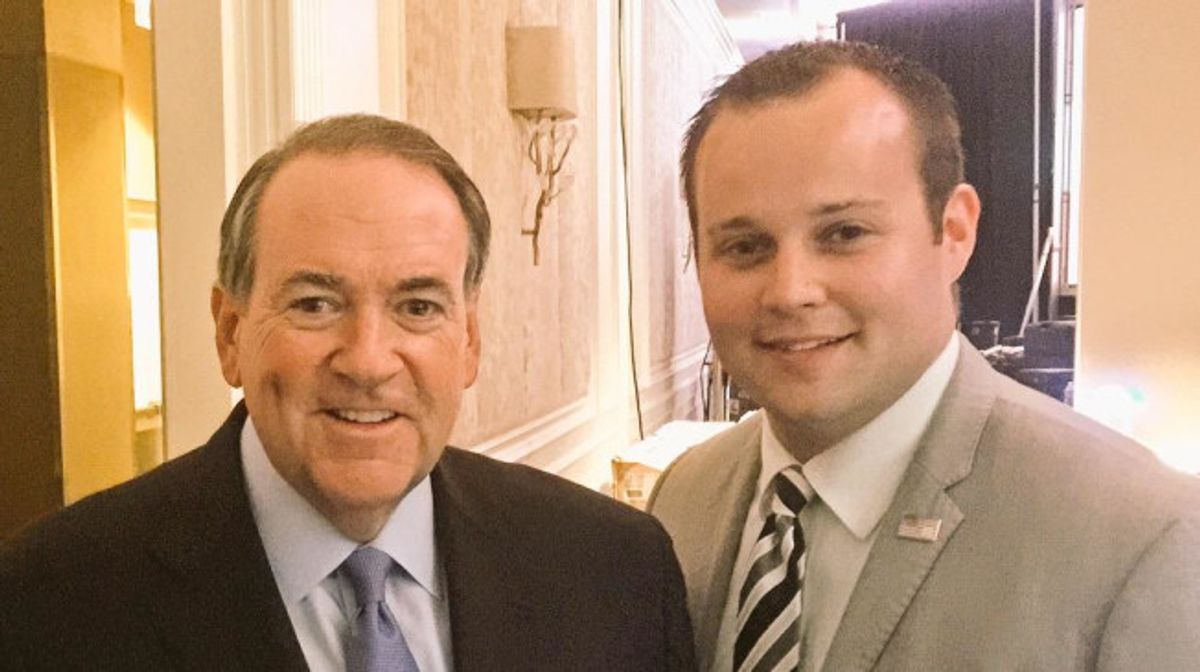 Presidential candidate and former governor of Arkansas, Mike Huckabee, became the first public figure to express support for the ultra-Christian Duggar family of TLC's "19 Kids and Counting" reality show after the 27-year-old Duggar son, Josh, admitted to alleged child molestation charges as a teenager. Huckabee published his statement on his Facebook page and, among other things, wrote:

Josh’s actions when he was an underage teen are as he described them himself, 'inexcusable,' but that doesn’t mean 'unforgivable.' He and his family dealt with it and were honest and open about it with the victims and the authorities. No purpose whatsoever is served by those who are now trying to discredit Josh or his family by sensationalizing the story.

Huckabee's soft-pedaling here, as well as his attempt to pivot the scandal into the laps of everyone else but the perpetrators, makes it seem as if Josh Duggar innocently blurted an obscenity on the radio, or was caught shoplifting a bag of chips from a 7-Eleven. He confessed to repeatedly molesting young girls. Then he and his family engaged in a lengthy cover-up, while foisting Josh into the spotlight of their television show and allowing him to proselytize in support of the twisted Duggar concept of "family values," which included shaming the LGBT community. There's no way to soft-pedal something like this, but Huckabee managed to do it, and it inextricably tethers the presidential candidate to these unforgivable people.

And it kind of makes sense, too.

Usually when an anti-LGBT Christian conservative is caught in a sex scandal, the real crime is the hypocrisy. In the case of Josh Duggar and his family, it's about the crime and the hypocrisy and the scam, all functioning in tandem, that make this particular scandal so horrendously ugly.

One of the broadstroke take-aways from Huckabee's statement is the obvious double-standard. Huckabee has repeatedly shoehorned himself into various news cycles by condemning everyone from single mothers to Beyoncé. Regarding the latter, where was the soft-pedaling about Beyoncé's (comparatively inconsequential) song lyrics, for which he publicly scolded both Beyoncé and, amazingly, the president and Mrs. Obama?

Interesting how Huckabee reprimanded the Obamas for allowing their daughter to listen to Beyoncé, and yet he can't quite bring himself to similarly wag his finger at Jim Bob and Michelle Duggar for manufacturing an environment that led to their son becoming a sexual predator, while concurrently burying the crime and scamming television viewers into unknowingly following the allegedly wholesome, Christian life of that predator. Put another way: Beyoncé and the Obamas are immoral because of song lyrics, but Jim Bob, Michelle and Josh Duggar are, according to Huckabee, "honest" and "good people." (Insert your own race-based observations here.)

The scam element -- as well as the cover-up -- can't be understated. Jim Bob Duggar withheld the molestation from the police for an entire year while he ran unsuccessfully for the U.S. Senate, and when Jim Bob finally reported the molestation to the police, he approached a family friend in the Arkansas State Police who was later nabbed for child pornography. And then the Duggars knowingly and self-righteously presented themselves as reality show saints, floating like winged cherubim above the homosexual riffraff, hurling down condemnations and outright lies at the sodomites whenever an opportunity presented itself. The Duggar television brand, while based on real life, is clearly and carefully sculpted to bury the nasty truth.

For seven years, television viewers, whether hate-watching or not, made the "19 Kids and Counting" show a massive hit; glued to their TVs for never-ending Duggar marathons, rooting for America's largest and most clean-cut Christian family. Jim Bob, a self-professed Christian, obviously calculated that the gold-mine was worth con-job.

Likewise, Mike Huckabee is scamming his political supporters, hubristically comporting himself as a serious candidate when it ought to be fully transparent to anyone paying attention that he's running simply to burnish his career and to augment his personal wealth.

Huckabee's candidacy isn't about helping his supporters who, by the way, are donating their hard-earned cash and limited spare time to his campaign; Huckabee's candidacy is all about increasing his media cache, it's about boosting his speaking fees and strengthening his hand in preparation for his next Fox News Channel contract. Former George W. Bush speechwriter, David Frum saliently refers to Fox News and AM talk radio as the "conservative entertainment complex" and Huckabee is one of the main stage players. This can't be emphasized enough: Huckabee is taking money from ordinary Americans who think he's in the race to win and to change things, when in reality he has no hope of winning and he knows it. But having "presidential candidate" on a contract term sheet brings with it a substantial rocket-boost to Huckabee's earning potential.

Huckabee and the Duggars are ultimately a perfect match: they're phenomenal hypocrites and they've made hugely successful careers for themselves by claiming, in practice, to be something they're really not.