We stopped arguing over what to wear. She felt powerful each day. Did parents judge me? Maybe, but I let it go 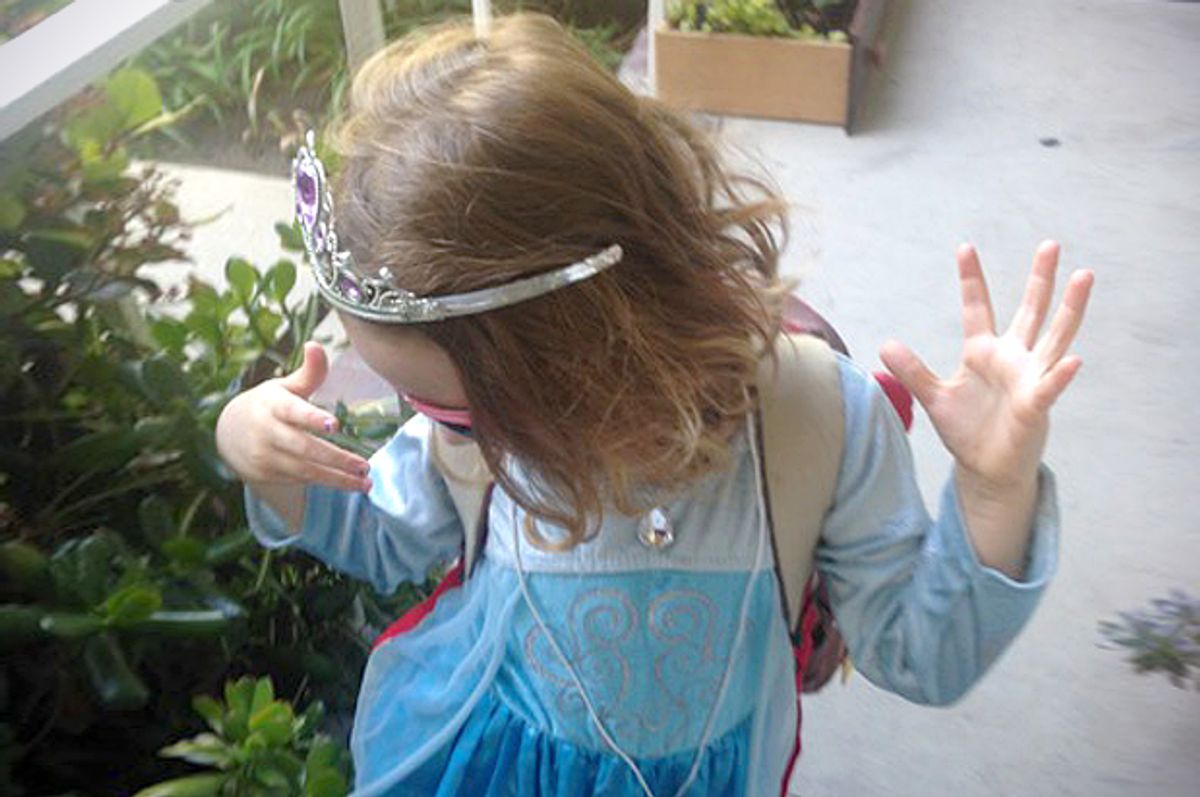 A photo of the author's daughter
--

The “ice princess” dress looked so innocent in the discount store, no idea what it was in for. It wasn’t a Disney-sanctioned, Elsa from “Frozen” dress, but it looked the part — an ankle-length number with a powder-blue velvet bodice, cerulean skirt accented by silver swirls, a white gauzy cape down the back and a plastic diamond gem centered just below the collar. Grace, nearly four, had been talking about being Elsa next Halloween since last Halloween. For $14.99, I figured I’d get a jump on her costume.

It’s odd that I would buy a princess dress for my daughter, let alone let her wear it nearly three weeks straight. Like a lot of pre-parenthood people, I had definite ideas of what wouldn’t happen in my home once a child entered it. No sugar. No TV. And for certain, no princesses, with their helpless ways and infuriatingly tiny waists.

Of course, like every parent, I laugh at today’s reality vs. my pre-child expectations. File TV and sugar under “if you can’t beat ’em…” And the princess thing — it’s ubiquitous, some kind of magnetic call from deep in her DNA. By osmosis, Grace knew the “Frozen” theme song, “Let It Go,” months before she ever saw the movie. Suddenly it was all “Frozen”-themed nail polish, pencil erasers, stickers and lip balm. Elsa had eclipsed Grace’s first love, Hello Kitty, and her second, Batman, who had even made an appearance at her birthday party. I took solace that at least Elsa and her sister Anna were plucky heroines who solved their own problems and helped each other, not like that doormat Cinderella (time to move on, girl, and start that vet-tech training) or the dim-witted Aurora of “Sleeping Beauty” (you had one job: “don’t touch the spinning wheel.” Just the one job).

So when I gave Grace the Elsa dress one Saturday afternoon, she put it on immediately and wore it the next day as well. On Monday, she wanted to wear it to school. I gently tried to change her mind. Getting her dressed makes me painfully, acutely aware of my control issues. In theory, it shouldn’t matter what she wants to wear as long as it’s seasonally appropriate. But a part of me I’d like to deny, but can’t all the time, wants her to wear what I’ve picked out, whatever is nuanced and correct for each occasion. Maybe it’s a kind of inability to truly separate myself from my daughter. Maybe it’s my own kind of latent narcissism, putting forth my daughter as a reflection of myself into the world. And then there’s the side-eye I imagine I’ll get from other preschool parents and staff (“who’s making the decisions here?”)

Grace is one of the most determined people I’ve ever met. She’s confident in her ideas, with a fierce independence that simultaneously calms and alarms me. When she was only a few weeks old, she insisted on holding her bottle herself. At two, she was able to pick ingredients and make her own sandwiches. Now, at nearly four, ain’t nobody going to tell her what to wear.

So for more than three weeks straight, she picked the Elsa dress, and to my shock, it was a win for me. Knowing what she was going to wear each day eliminated a good 20 minutes of outfit and dressing angst. Grace would accommodate practical exceptions for after-school activities and sleeping. (I know what you’re wondering, and yes, we’d wash the dress at night.) On day five, I started posting pictures on Facebook of her in the dress and how she styled it out: Rapper’s Delight with shades and a backpack; Santa Fe hippie with shell and crystal necklaces; Fresh Princess of Bel Air with pink sparkle Vans and a tiara. Friends started to check in daily to see if she was still wearing the dress. She was.

On day nine, her Aunt Karen sent in a stunt double: A real Disney Elsa dress, though a little scratchier from the stiff tulle on the arms and shoulders. No matter, Grace decided she would wear that one over the original one.

Day 12, ironically enough, happened to be Costume Day at school. It was Elsa, again, of course. This prompted a discussion about dressing up.

“I’m going to change my Halloween costume,” she said, looking at me, seriously, deliberately, as if explaining the complexities of an adjustable-rate mortgage.

“Anna,” she said. Anna is the resourceful, fun princess sister who thinks up interesting things to do, while Elsa is like your worst emo-PMS friend from college, so I guess that would be an improvement.

By day 13, the dress-wearing had taken on a kind of anthropological, performance-art quality. I was in full support of her going with it as long as possible.

I suppose there are two kinds of parents: those who can’t roll with 23 days of an Elsa dress, and those who can. The reason I switched from being the former to the latter is because of what the dress means to Grace. It’s not because she’s waiting for a prince to rescue her, or because she’s trying to channel the glamour of Elsa’s lush platinum locks. It’s because, as she explained, “Elsa has ice powers.”

I understand the parents who worry. When I was 10, I rode New York’s crosstown bus to school and back, no chaperone required, a bus pass allowing me and my friends access to the entire city. Today, parents in my quiet, safe, L.A.-adjacent neighborhood barely let their tweens and teens walk a few blocks to the ice cream store. Most families are over-scheduled. Grace does karate, swimming and ballet, which she loves, but I wonder if it’s too much? I’m a single, working mom, and after school, there’s not a lot of time for a stock-photo life -- flying kites in meadows or jumping around on the beach. Grace doesn’t have a lot of say in where she goes or how she spends her day. So if this little blue dress and what it symbolizes makes this small child in a big world feel powerful, I’m totally, utterly, completely down with that.

If it’s my job to help Grace along in her life, the least I can do is let her fly her own freaky flag — and enable her take her power where she can. The day of this writing, she broke the Elsa spell and opted for a long black sequin skirt my mother made her, a neon-pink tutu T-shirt, and silver sandals, an ensemble I’m calling “Boca Raton Pinochle.” Grace may or may not go back to the Elsa dress tomorrow. She’ll let it go when she’s ready.

Vanessa McGrady is the author of "Rock Needs River." She spends time thinking about feminist parenting, high-vibrational food, and badass ways to do things better. She often wonders why people aren’t more freaked out about plastic in the oceans. Whether in New York, the Pacific Northwest, or Glendale, California, she is grateful to call each place home. She’s lucky and profoundly grateful to be a mom to a magical sprite child named Grace. To learn more about Vanessa, visit www.vanessamcgrady.com.