These guys are painfully wrong about Islam: 3 things that every anti-Muslim zealot needs to admit

Bill Maher & Richard Dawkins continue to disparage a religion that, in all honesty, they know little about 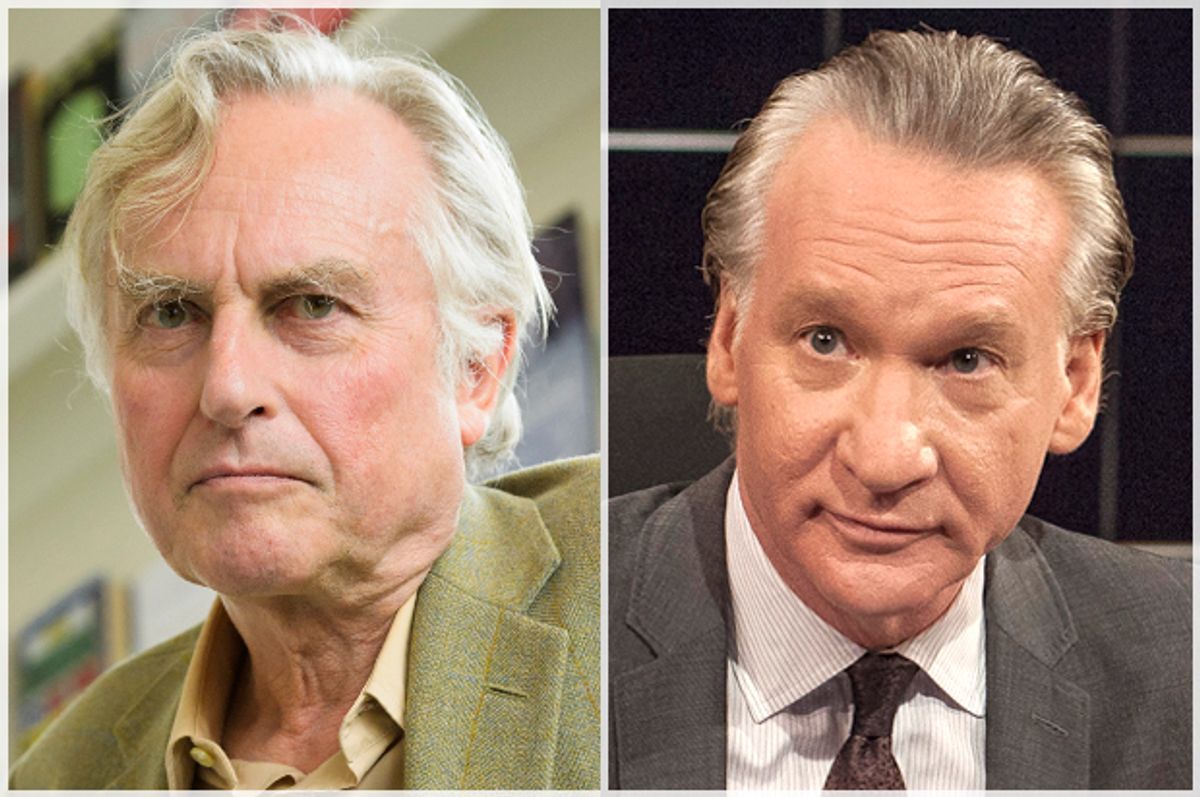 As a practicing Muslim, I don’t believe Islam is above criticism. I do believe that Islam backs free speech. I also believe that Islam champions secular governance. But what’s significant about my beliefs is why I believe them -- which is because they are precisely what the Qur’an teaches, and what Prophet Muhammad exemplified.

Perhaps this is why I find arguments like the one put forth by Jeffrey Tayler in Salon earlier this month -- written in the aftermath of the "Draw the Prophet" shooting in Texas and Charlie Hebdo's controversial PEN award -- to be yet another straw man, one that avoids three realities critics of Islam continue to ignore. For example, Tayler's claim that "Prophet Muhammad was a triumphant warlord leading military campaigns that spread Islam throughout Arabia" is but one example of the numerous historical fantasies he writes; a fantasy that is wholly contradictory to Prophet Muhammad's well established rules of war. (SPOILER: Islam forbids spreading faith by the sword and permits fighting only in self-defense).

Had Tayler presented his arguments as a criticism of several Muslim majority political regimes — Pakistan, Iran and Saudi Arabia to name a few — I would have largely agreed with his claims. He runs into trouble, however, when he unwarrantedly conflates political regimes with the religion of Islam as a whole. Further exacerbating Tayler’s position is his reliance on comedian Bill Maher and internationally recognized hatemonger Pamela Geller as presenting some sort of authentic reality of Islamic teaching. Maher, I’ve heard, is actually a nice guy in person — but that characteristic does not somehow make his commentary Islamic scholarship. Geller, meanwhile, is on hate watch lists for both the Anti-Defamation League and the Southern Poverty Law Center, and is banned from the United Kingdom for her hatemongering; she has zero academic credentials on the subject of Islam. And lest there be any confusion, the United Kingdom is definitely not an “Enforcer of Shariah” -- a term Tayler uses to describe the 204 authors who signed a letter dissociating themselves from a free speech award given to the surviving artists of Charlie Hebdo.

Indeed, the United States has a proud free speech model -- one I support as an American, as a Muslim, as an attorney and as a person who regularly receives death threats for speaking my mind. America’s current free speech model is not only unique in its own history, but unique when compared to the contemporary developed world.

And here is the first reality critics like Tayler ignore: Most of America’s staunchest allies enforce speech laws much stricter than what Islam teaches -- yet no one accuses such Western nations of being free speech obstructionists.

For example, Article 415 of the Italian Penal Code states, “Whoever publicly incites… hatred between the social classes, shall be punished with imprisonment from six months to five years.” Likewise, Article 261 of the Swiss Penal Code states issues up to a three-year prison sentence for anyone who “publicly disseminates, organizes, or encourages participation in events promoting ideologies that have as their object the systematic denigration or defamation of the members of a race, ethnic group or religion.” Our neighbor Canada’s Criminal Code Section 319 offers a two-year prison sentence for anyone who “wilfully promotes hatred against any identifiable group [by] communicating statements, other than in private conversation.”

I could go on with Denmark, Poland and Spain, among other Western nations that enforce speech restrictions that not only mimic blasphemy laws in nations like Pakistan, but would also clearly violate our First Amendment. Yet, we see no outcries of oppression from these laws in these Christian-majority nations. Meanwhile, Islam is somehow blamed when nearly the exact same laws are promulgated in Muslim-majority nations. The double standard is astounding.

And Western nations -- not Shariah -- in fact enforce such laws restricting speech. Germany rewards Holocaust deniers with a five-year prison sentence. Two years before the horrific Charlie Hebdo terrorist attack a French judge ordered Twitter to hand over identifying information of users engaging in anti-Semitic and racist comments. Where was the outcry of free speech oppression then?

The second reality critics like Tayler ignore is that they insist on viewing terrorism done by Muslims in a vacuum and unique to just Muslims — both of which are false positions.

The reality is that Western foreign policy has long supported corrupt dictators and despots in Muslim-majority nations, including Saddam Hussein, Osama bin Laden, Muammar Ghaddafi, Hosni Mubarak and even Bashir Assad. In turn, these corrupt leaders — who already endorsed terrorism before U.S. support — have only further advanced their extremist agendas after U.S. support by leveraging the fact that Western wars have killed some 4 million Muslims, mostly civilians, since 1990 alone. President Obama correctly stated, “ISIL is direct outgrowth of al Qaeda in Iraq, which grew out of our invasion, which is an example of unintended consequences, which is why we should generally aim before we shoot.”

Likewise, experts agree that terror groups like ISIS are not uniquely violent or in any way unique to Islam, and “Christian” terror groups like the Lord’s Resistance Army and CAR militias commit terrorism that is as bad or worse. The difference is that in America no massive well-funded campaign exists to malign all Christians for the acts of a few terrorists. This refusal to understand the broader international context of extremist groups ensures critics of Islam succeed only in perpetuating the myth that Islam is violent -- a belief that is devoid of reality.

Third, and I believe most significantly, critics of Islam all too often demand public debate about Islam, but then refuse to empower and elevate those Muslim organizations demonstrating pluralism, universal human rights and international justice.

For example, even if a critic chooses to disregard every fact presented above regarding free speech double standards, corrupt Muslim leaders and unjust Western interventionism, they cannot possibly ignore the 126-year example of the Ahmadiyya Muslim Community.

The Ahmadiyya Muslim Community (for which I am national spokesperson) is the world’s single largest Muslim organization united under a single Imam -- His Holiness the Khalifa of Islam, Mirza Masroor Ahmad. This is not a dogmatic argument -- it is a practical one. Aside from running more than 16,000 mosques in 206 nations, more than 600 secular educational institutions providing free education for all children of all faiths, and dozens of free hospitals, the Islamic Khalifa Mirza Masroor Ahmad challenges all who claim Islam is violent. His response is by waging a bloodless intellectual Jihad of the pen while categorically condemning any form of violent Jihad. In its 126-year history this community of Muslims has remained united under an international Caliphate, and has spread to more than 200 nations while relentlessly championing a separation of mosque and state. And despite facing ongoing terrorism and state-sanctioned persecution, Ahmadi Muslims have never once engaged in or endorsed a single act of religious violence.

Critics dismiss the Ahmadiyya Muslim Community by claiming we are a “minority” or because extremist Muslims consider us heretical. These arguments are specious. I find it peculiar that such critics point to the roughly 30,000 members of ISIS and the past year as “proof” Islam is violent, but ignore the tens of millions members of the Ahmadiyya Muslim Community living progressively in 206 nations for well over a century as “a minority” that “doesn’t represent Islam.”

On the contrary, Ahmadi Muslims demonstrate that same true Islam that Prophet Muhammad exemplified as he established universal freedom of conscience for all people of all faiths — one of pluralism and service to all humanity. Yet, because our actions undermine the narrative of both intolerant politicians in Muslim majority nations and the ignorant narrative of anti-Islam critics in the West, both sides pretend we do not exist.

The end result is more ignorance, more intolerance and more fear of the other. This must change if we hope to actually overcome extremism and injustice.

I don’t believe Tayler is Islamophobic, a term I’ve stated before is sometimes unwarrantedly thrown around. I believe, however, Tayler and other critics of Islam need to acknowledge the reality of the world in which we live. They can begin by equally criticizing Western nations for suppressing free speech, recognize and demand a stop to ongoing Western injustices that support corrupt Muslim leaders and have resulted in untold horrors and millions of deaths, and recognize that a practical, international, and progressive Muslim community exists that demonstrates what Islam truthfully stands for.

That approach protects free speech while effectively overcoming all forms of extremism.

Qasim Rashid is an attorney, best-selling author of "Extremist: A Response to Geert Wilders & Terrorists Everywhere," and National Spokesperson for the Ahmadiyya Muslim Community USA. Follow him on Twitter @MuslimIQ and on Facebook.​