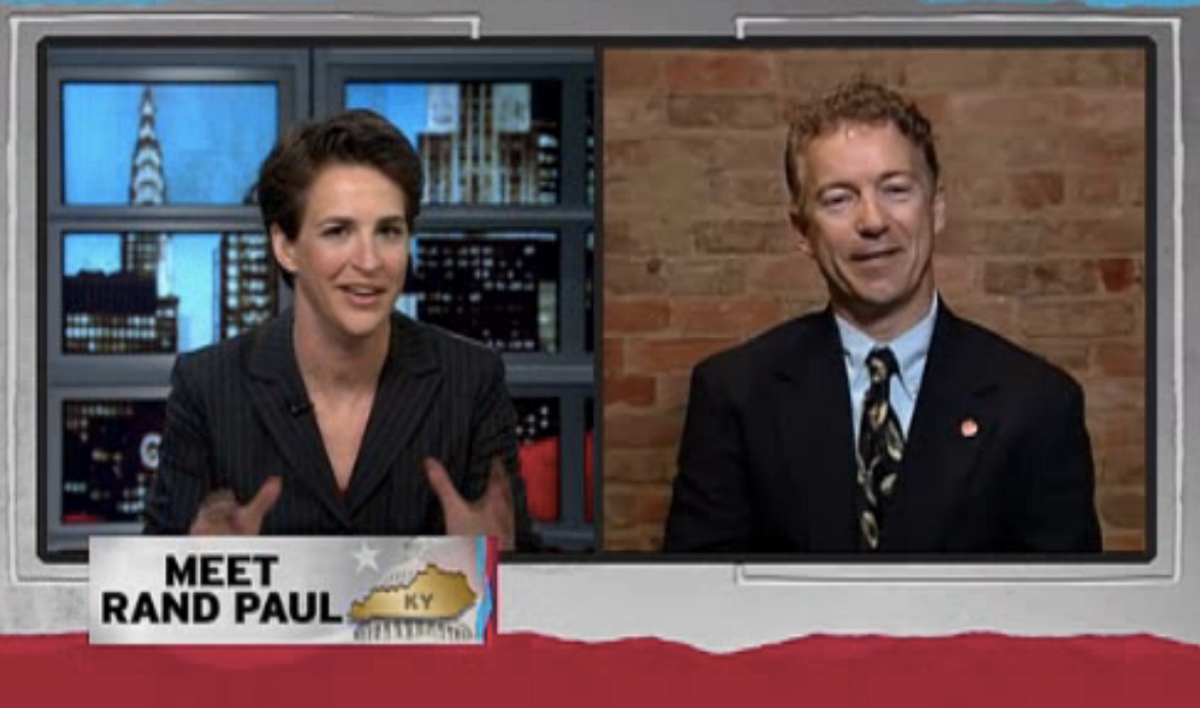 Awww, how they grow up so fast! Before becoming the anti-droning, mansplaining GOP presidential candidate with a lick-happy political director we so enjoy today, Rand Paul was just a lil' Kentucky GOP Senate nominee squirming under the bright lights of national media attention.

Paul had just become the subject of a media firestorm after giving an interview with the  Louisville Courier-Journal. In it, he expressed opposition to the Civil Rights Act of 1964, explaining that no federal civil-rights law should bar businesses from racial discrimination.

"In a free society, we will tolerate boorish people who have abhorrent behavior," he said at the time.

People were furious -- but, mostly, deeply confused -- by these comments. (So you do abhor racism but you wouldn't have voted for the Act?) This is when Rachel Maddow stepped in and invited the newly minted Senate Republican nominee onto her MSNBC show. She wanted to give him the chance to amend some of his troubling comments. But, no. Things just got worse and worse and worse.

This comment would come sandwiched between many instances of racism-denying. His opposition to the Act was in no way motivated by race, he suggested, but issues of "free speech."

"Should we limit speech from people we find abhorrent? Should we limit racists from speaking?" Paul asked Maddow. "I don't want to be associated with those people, but I also don't want to limit their speech in any way in the sense that we tolerate boorish and uncivilized behavior because that's one of the things freedom requires is that we allow people to be boorish and uncivilized, but that doesn't mean we approve of it."

Ah, yes. Is it starting to make sense now why Paul, the now-presidential nominee, decided to keep so quiet when Gov. Mike Pence was embroiled in a national controversy around the anti-gay Religious Freedom Restoration Act?

Paul issued what amounted to a "no comment" when asked about RFRA back in April. A rep of Paul's PAC said that the senator was "out of pocket with family and not doing any media all week long," when The Hill pried more.

Watch a clip below, or the original MSNBC interview in full here:

See also: What was buzzing around the Internet for the week of May 16, 2010