“Battle Lines: A Graphic History of the Civil War” uses vivid art to tell the story of America's darkest war 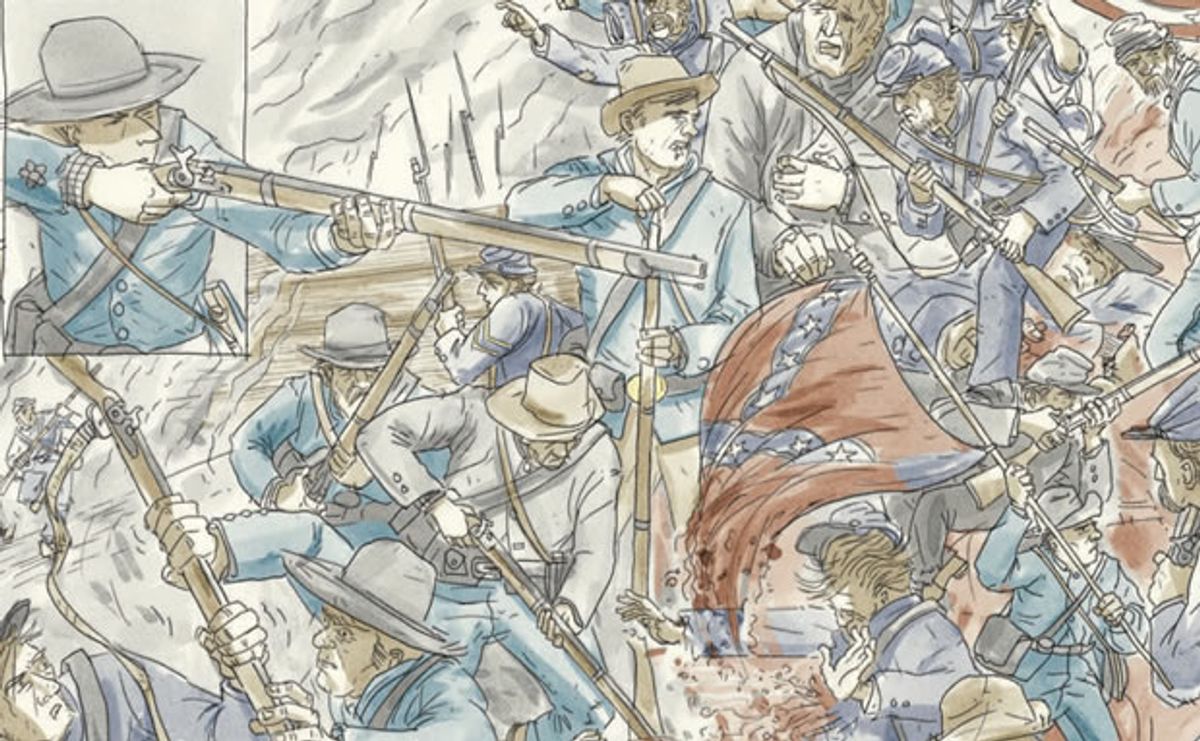 "Battle Lines: A Graphic History of the Civil War" is a remarkable achievement both as a work of history and visual literature, providing a broad overview of the complex circumstances that gave rise to the bloodiest conflict in American history, while simultaneously making those deaths meaningful by capturing fleeting moments amid the slaughter in panels so beautifully wrought as to beggar description.

The book is a collaboration by Penn State historian Ari Kelman, who won the 2014 Bancroft Prize for "A Misplaced Massacre," about the unecessary 1864 slaughter of the Cheyenne at Sand Creek, and Jonathan Fetter-Vorm, whose 2012 graphic novel "Trinity" worked as both a detailed history of the building of the first atomic bomb and a philosophical meditation on its impact on humanity.

In short, it would be difficult to imagine a creative team better suited to capturing the tragic magnitude of the Civil War on an intimate and harrowing scale. Its engagement with actual history is on par with Alan Moore and Dave Gibbon's engagement with fictional history in "Watchmen."

If I still taught visual rhetoric, I could easily see pairing the two books and discussing the way in which, for example, Kelman's stunningly concise summaries of the troop movements and Washington politics impact the reader's experience of the pages that immediately follow.

Consider, for example, what Kelman told me was his favorite sequence in the book, which begins with an update on the war's progress via an ersatz edition of the Harrisburg Bulletin: Without waving his arms and demanding the reader be impressed by how clever he is, Kelman sets the stage for what's to come. That it's a Harrisburg newspaper places the action in Pennsylvania. The lead headline indicates that Lincoln's dissatisfied with his leadership, a fact made plain in the copy beneath it. In the lower right-hand corner are the words "RUMORS FROM THE FRONT" followed by a maniculum pointing to the next page, suggesting that what's to follow will somehow involve those rumors -- instead, as the chapter title "The Photograph" presaged -- what follows is the opposite of a rumor: evidence. The battle has already occurred, and the land itself has suffered mightily for it. In the first panel, the bullet-scarred and blood-soaked rocks bear witness to the violence of Gettysburg, but there's a lack of agency to the violence. Is the boot in the second panel responsible for it? The next four panels indicate that he very well could be. The seventh panel clearly contains some form of agency, as bodies that have lost that much blood aren't capable of dragging themselves over such unforgiving terrain.

It is only in the eighth and ninth panels that it becomes clear that the feet -- and the body to which they belong -- are those of a witness to, not a participant in, this violent affair. That he's literally framing a scene in the ninth panel hammers this outsider perspective home, as does the fact that the photograph revealed in the following pages is the work of Scottish photographer Alexander Gardner. That he moves a dead body from one place to another to improve the composition of his photograph doesn't render the man's death any less final, nor does it deter from the reality of the short lives of those who sparred on the fields of Gettysburg. In a way, these panels stand-in for what Kelman and Fetter-Vorm accomplished in the book as a whole, presenting a staged version of actual history, meant to horrify readers who have become immune to the violence of war. As evidenced by the dramatic movement from the long shot in the first panel, to the medium-long shot in the sixth and the close-up in the ninth, that doesn't matter -- that soldier is no less dead for the staging.

I spoke to Ari Kelman and Jonathan Fetter-Vorm about the book, in particular, how such an unusual cultural artifact came to be.

What made you want to write this, Ari? And how'd Ari convince you to work with him, Jonathan?

Kelman: About four (or was it five, Jonathan?) years ago, I got a call from an editor at a university press. With the Civil War sesquicentennial looming, she wanted me to write an introduction to the war for a broad audience. The only catch was that the book had to incredibly short: 30,000-40,000 words. I couldn't imagine how to recount the epic history of the Civil War (please cue score by James Horner) in so few words. So I passed.

Then, in the classic style of a neurotic academic, I started to fret about my decision. Maybe I shouldn't have given up the chance to write what might have been a fun project, a book that had the potential to reach a broad audience -- and possibly sell well.

I started to ask myself how many words I would need to tell the story of the war. Looking at the lecture notes for my Civil War undergraduate class, I really couldn't imagine doing it in fewer than 75,000. (It's possible that brevity isn't my strong suit, yes.)

Then I woke up one morning -- no, I'm not kidding about that -- and thought, "Oh, I know, a graphic history of the Civil War!" I contacted Thomas LeBien, who used to be the brains behind Hill and Wang's graphic books, and he said he was interested.

And that's "Battle Lines'" origin story. No dying planets, no radioactive spiders, no genetic mutations, just a history dork fretting about passing on a good opportunity and coming up with a way to (try to) redeem himself.

Fetter-Vorm: I have to blame Thomas LeBien. We were in the final stages of "Trinity" and he mentioned that he had this historian who was gung-ho about doing a graphic history of the Civil War. I was hesitant at first (I mean, not really, I'll take what I can get) for two reasons: graphic histories are an exciting format, but they're hard to pull off, especially for a historian who's used to writing words by the tens of thousands -- given the limitations of space, you really can't afford to have a single unnecessary word. In a way, Ari -- with his concern about whether he gets 50,000 or 75,000 words -- jumped from the frying pan into the fire.

My second hesitation was simply my own ignorance -- growing up in Montana meant that I didn't learn about the Civil War in the sort of detail and intensity that you do when you grow up on the East Coast, when you're within driving distance of where it all happened. As a result, I really had to start from scratch. I think this ignorance on my part actually worked to the book's advantage--between Ari the expert and me the novice we could tell the story of this war in a way that would be clear-eyed enough for newcomers, yet nuanced enough for the history buffs.

The thing that sealed the deal for me was Ari's proposal: It was really weird. One chapter took place inside a dying man's stomach. Another revolved around a talking statue. Actually, maybe I shouldn't mention how much cooler this book was before I signed on.

What was the most difficult thing to get right -- both emotionally and historically? Did you ever feel that it was unprofessional to wrench emotion from the historical record? (I'm thinking, for example, the chapter on early photography, which brought tears to my eyes.)

Kelman: The most challenging thing was striking a tone that was at once scholarly and entertaining. As for whether I worried about "wrench[ing] emotion from the historical record," no, I didn't. The emotion is already there. We just pointed it out to readers. More broadly, the key to good history is empathy -- as distinct from sympathy -- and so we tried to write a deeply empathetic book, in which we depicted all of our subjects, whether sympathetic or not, as human.

We spent a huge amount of time trying to avoid even flirting with racialized caricatures. But I'll let Jonathan speak to that in more depth.

Fetter-Vorm: I agree with Ari that the emotion is already in the historical record. The most intense scenes in this book all came from firsthand accounts or contemporary sources. The challenge actually was in figuring out how to depict what these witnesses recorded in a way that wouldn't -- when transposed into the medium of a comic book -- come across as sensational. If anything, our job was one of restraint, of holding back against the tide of emotion and intensity and innumerable personal triumphs and tragedies that makes up the historical record.

The scope of this history really does beggar the imagination. I like to think that one way of reading "Battle Lines" is as 15 variations on how to show the unimaginable.

Ari, I keep wanting to frame things as a give-and-take between you as a historian and me as a storyteller, but it was never really that simple -- you're a great storyteller. And, while I'm no historian, I do prefer my books to have footnotes.

That said, you were the one to say "we can't do that because that's not true...go read these 10 books and get back to me when you know something" and I was always the one who had to tell you that your crazy ideas were impossible to draw.

Jonathan, given how light the overall palette of the book is, did you worry about accidentally crossing over into racial caricatures?

Fetter-Vorm: The simple answer to a difficult problem is that I based most of my characters on historic photographs of real people. There is such a rich archive of portraits from this era that one of my first steps in researching this book was to assemble a file of photo-references, literally just a stack of portraits to draw from.

That said, is your question more about the fact that all of the characters are just some variation on the same tone? Because that is intentional. There are essentially four colors in this book, and for the most part, this is how I used those colors: cornflower blue for the South, royal blue for the North, brown for skin tones, and red for blood.

Kelman: Piggybacking on something Jonathan said above, the artist/scholar/illustrator trichotomy never worked with this book. The original conception may have been mine, but Jonathan transformed it -- not only with his visual sensibility, but also with his ear for narrative and effective historical storytelling. In the end, our process, at least for scripting, became genuinely collaborative.

Then he'd draw in his drawing cave, and I'd mock the results. Which is to say, the visual part of the book really was/is his. I gave him feedback, but usually only along the lines of, "That looks nice" or "Try not to be so racist when you draw African-Americans, please."