137 shots, no justice: Cleveland protests as another cop goes free

A judge can't determine who fired the shots which killed two unarmed black men, so an officer is acquitted 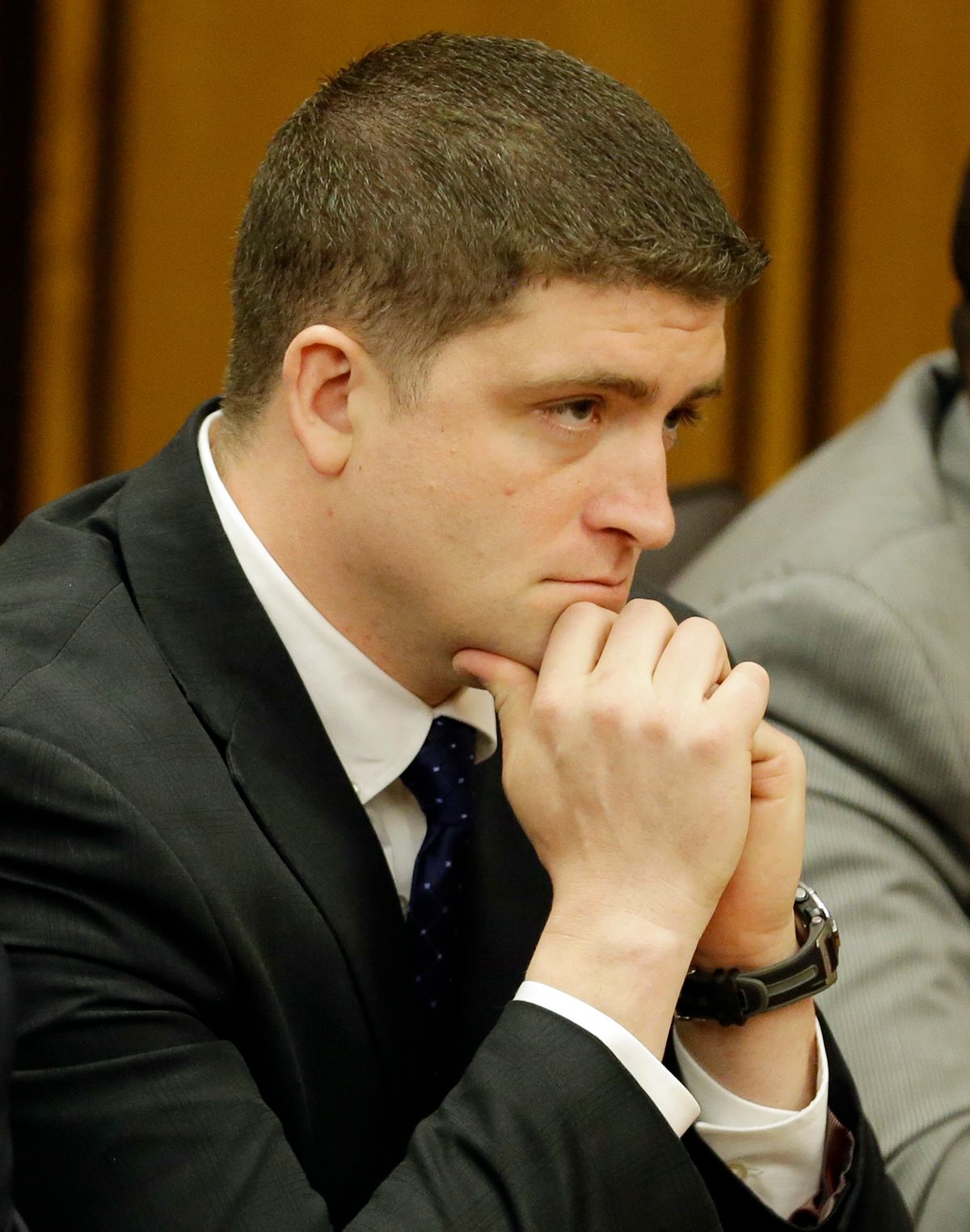 Michael Brelo listens to the judge read his verdict Saturday, May 23, 2015, in Cleveland. Brelo, a patrolman charged in the shooting deaths of two unarmed suspects during a 137-shot barrage of gunfire was acquitted Saturday in a case that helped prompt the U.S. Department of Justice determine the city police department had a history of using excessive force and violating civil rights. (AP Photo/Tony Dejak) (AP)
--

A white patrolman who fired down through the windshield of a suspect's car at the end of a 137-shot barrage that left the two unarmed black occupants dead was acquitted Saturday of criminal charges by a judge who said he could not determine the Cleveland officer alone fired the fatal shots.

Michael Brelo, 31, put his head in hands as the judge issued a verdict followed by angry, but peaceful, protests: Outside the courthouse police blocked furious protesters from going inside while across the city others held a mock funeral with some carrying signs asking, "Will I be next?"

The acquittal came at a time of nationwide tension among police and black citizens punctuated by protests over deaths of black suspects at the hands of white officers — and following a determination by the U.S. Department of Justice that Cleveland police had a history of using excessive force and violating civil rights.

Before issuing his verdict, Cuyahoga County Common Pleas Judge John P. O'Donnell reflected on the unrest. "In many American places people are angry with, mistrusting and fearful of the police," he said. "Citizens think the men and women sworn to protect and serve have violated that oath or never meant it in the first place."

But O'Donnell said he would not offer up Brelo to an angry public if the evidence did not merit a conviction.

"I will not sacrifice him to a public frustrated by historical mistreatment at the hands of other officers," O'Donnell said.

Brelo — who fired a total of 49 shots, including 15 while standing on the hood of the suspects' vehicle — faced as many as 22 years in prison had the judge convicted him of voluntary manslaughter in the shooting that happened after Timothy Russell's beat-up Chevy Malibu backfired while speeding by police headquarters.

"He's not going to dodge this just because he was acquitted," she said. "God will have the final say."

The U.S. Justice Department, U.S. Attorney's Office and the FBI will review the testimony and evidence and examine all available legal options, said Vanita Gupta, head of the Justice Department's Civil Rights Division.

After the verdict, sheriff's deputies stood in front of the courthouse carrying clear shields as protesters chanted "Hands up! Don't shoot!" — a rallying cry linked to the death of 18-year-old Michael Brown in Ferguson, Missouri. One demonstrator bowed his head, hands folded, in front of the phalanx of deputies, praying in silence.

About 200 people walked in a mock funeral procession that had already been planned to mark six months since another deadly shooting that sparked anger in Cleveland: the killing of Tamir Rice, a black 12-year-old carrying a pellet gun who was shot by a white rookie officer.

Some carried signs saying "I Can't Breathe" and "Freddie Gray Lynched," references to a pair of deadly police encounters: the chokehold death of Eric Garner in New York City and the death of a Baltimore man who suffered a spinal injury while in custody.

The unusual timing of the verdict — a Saturday morning on a holiday weekend — was intentional. The county's top judge said it was meant to prevent traffic issues downtown.

Russell, 43, and Malissa Williams, 30, were each shot more than 20 times at the end of the Nov. 29, 2012, pursuit. Prosecutors argued they were alive until Brelo's final salvo but medical examiners for both sides testified they could not determine the order in which the deadly shots were fired.

The case hinged largely on the less than 8 seconds — 7.392, to be exact — during which Brelo fired his final 15 rounds.

O'Donnell said a voluntary manslaughter conviction would require that Brelo's shots alone were the causes of death or the final wounds tipped the balance between life and death.

O'Donnell spent nearly an hour explaining his decision, even using mannequins marked with gunshot wounds. Brelo could have been convicted of lesser charges, but O'Donnell determined his actions were justified following the chase, which included reports of shots fired from Russell's car, because officers perceived a threat.

"Officer Brelo risked his life on that night," D'Angelo said.

Cuyahoga County prosecutor Tim McGinty said he respects the judge's decision. Despite the acquittal, he said the case will prevent police violence in the future.

"This tragic experience has already forced a culture change within the division of police and a needed reexamination of the use of deadly force," he said.

Thirteen officers fired at the car after a 22-mile high-speed chase that involved 62 marked and unmarked cars and reached 100 mph. Brelo was the only officer charged; prosecutors said he waited until the pair was no longer a threat to fire his final shots.

Authorities never learned why Russell didn't stop. He had a criminal record including convictions for receiving stolen property and robbery and had been involved in a previous police pursuit. Williams had convictions for drug-related charges and attempted abduction. Both were described as mentally ill, homeless and addicted to drugs. A crack pipe was found in the car.

The shooting helped prompt an investigation by the Department of Justice, which concluded the department had engaged in a pattern and practice of using excessive force and violating civil rights. The city and DOJ are currently negotiating over reforms.

Brelo has been on unpaid leave since he was indicted last May. Police Chief Calvin Williams said it will continue during disciplinary reviews for him and the other 12 officers.

In addition to the charges against Brelo, a grand jury charged five police supervisors with misdemeanor dereliction of duty for failing to control the chase. All five have pleaded not guilty and no trial date has been set.

"Our pursuit of justice for Timothy Russell and Melissa Williams is not over," McGinty said.